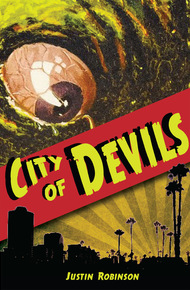 City of Devils by Justin Robinson

World War II was only the beginning. When the Night War ravages America, turning it into a country of monsters, humans become a downtrodden minority. Nick Moss is the only human private eye in town, and he's on the trail of a missing city councilor. With monsters trying to turn him – or, better yet, simply kill him – he's got to watch his back while trying to find his man. Or mummy, as the case may be.

Once, it was the City of Angels. But now, Los Angeles is the City of Devils…and Nick has a devil of a job to do.

The man knocking on the outside of my office window had the head of a fly.

I sighed. Not another one.

I wanted to shoo him away, but I didn't have a newspaper big enough. Were they even scared of newspaper? I'd have to check with the human-only apothecary on Alameda. The human flies were supposed to be pretty strong, just like their insect brethren, but I'd never arm-wrestled one. Better to be careful. Just in case. I dug the insecticide sprayer out of the desk, finding it under more wolfsbane than any man should ever have to see in his lifetime, and turned back around. He was still there, stuck to the glass, plainly visible even through the venetian blinds. One of his legs was a fly leg. Must make getting around fun.

I waggled the sprayer at him, making sure those big red compound eyes saw it. He licked the window with that horrible tongue thing. I cringed. Was that really necessary? I opened up the window next to him and got a whiff of whatever he'd had for breakfast. Sweaty garbage, judging by the smell.

"I don't... uh... I don't speak... fly." Why didn't they understand that? They were still newish; I couldn't remember them showing up before about six months ago. I wondered what had spawned them—pretty sure no one was keen to take the credit on that one. Safe bet it was a brainiac or mad scientist fiddling with something or other. Still, you'd think the human flies would have figured out that no one understood buzzing, no matter how slow or loud it got.

I could almost see him sigh. He was in a shirt and tie, wearing a pair of slacks with one leg torn off at the thigh to reveal a skinny greenish insect leg covered in stiff hairs, all topped off with a lab coat. Of course he was wearing a lab coat. He was probably with JPL or some other outfit. All the human flies seemed to be.

Wings like cellophane unfolded from his shoulders and he jumped off the window into the sky over Flower Street, nearly slamming into a witch speeding along on her broom. She almost lost her cat, catching the little black-and-white fella by the scruff of its neck and shouting something decidedly unladylike.

Just another traffic snarl in the former City of Angels.

It was the tail end of a lousy summer day, with the desert sun baking us like cookies. I had already sweated through my undershirt and was getting some nice rings under my armpits, and this stupid bowtie was starting to feel like a piece of spaghetti wrapped around my neck. The rickety little fan on the top of the filing cabinet wasn't doing much more than floating the ribbons threaded through its tines. Even that was taking more effort than it should've; the ribbons moved sluggishly through the soupy air. It would have been nice to chalk the whole shebang up to hell finally coming to earth, but the fact of the matter was, this was typical of summer in Los Angeles. Just another windless day spent cowering under the punishing heat, and wishing every public swimming pool in town wasn't monsters-only.