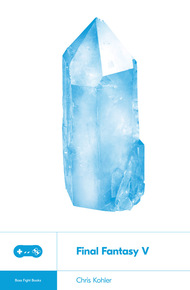 Chris Kohler is the author of Power-Up: How Japanese Video Games Gave the World an Extra Life, and the founding editor of Game|Life, the Webby-nominated video game section of WIRED. He is currently Features Editor of Kotaku, and lives in the San Francisco Bay Area.

When Final Fantasy V was released for the Japanese Super Famicom in 1992, the fantasy role-playing game was an instant hit, selling two million copies in the first two months alone. But the game was dubbed "too hardcore" for a Western audience and was and was not released outside Japan.

That didn't stop a teenage Chris Kohler from tracking down Final Fantasy V. The young RPG fan got a Japanese copy of the game, used it to teach himself Japanese, and with the help of some internet companions created the first-ever comprehensive English-language FAQ of the game.

Now the acclaimed author of Power-Up and an editor at Kotaku, Kohler is revisiting the game that started his career in games journalism. Based on new, original interviews with Final Fantasy V's director, Hironobu Sakaguchi, as well as previously untranslated interviews with the rest of the development team, Kohler's book weaves history and criticism to examine one of the Final Fantasy series's greatest and most overlooked titles.

"Absolutely in my top three Boss Fight Books tomes of all-time - and I've read all of them - Wired & Kotaku veteran Kohler blends the personal and professional to brilliantly analyze this sadly unlocalized (at the time) classic." – Simon Carless

Sakaguchi always had a writing partner. For the first three Final Fantasy games, he worked with outside collaborator Kenji Terada, who had written scripts for popular anime series like Kinnikuman and Dirty Pair. By Final Fantasy V, with more successes behind him and more talent on the bench, he looked in-house. Yoshinori Kitase, who had worked on Seiken Densetsu and Romancing SaGa, was a newcomer to the Final Fantasy team but Sakaguchi made him his right-hand man. The writing process, Sakaguchi says, was a team effort.

"In terms of story writing, I handled everything up through Final Fantasy VI," he tells me. "But when I say that I wrote the story, it's really closer to a plot... I laid the groundwork, and I had key moments, key lines that really were meaningful and critical to those scenes. But one approach that we were taking differently is, starting with FF3, we realized that because we had to work with our programmers to make these scenes happen and come alive, if we had given them every little detail of instruction, it became a little difficult to work that way. We wanted them to have a bit of a part, and take some work into their own hands as well." If it turned out that some of Sakaguchi's pre-written dialogue just wouldn't work in the scene that was transpiring, he says he was alright with throwing it out: "We were free-form in that way."

The actual scripting was a back-and-forth improvisation between Sakaguchi and Kitase. "I would take over maybe the first three scenes, and write the overview and the key moments," Sakaguchi says. "And then I would toss the next three scenes over to Kitase. And then it would get handed back to me."

Sakaguchi says that during this era, he was still getting down to the nitty-gritty of planning, plotting out for the programmers exactly how many squares a character would walk, what expression would be on their face, where the treasure chests would be placed in the dungeons. "There was kind of a nice rivalry between Kitase and myself," he says. "The daily ritual was, we'd show up at work, and I would have worked on something, and Kitase would have too. You know when you have those moments: One, two, three, show what you did? We'd see each other's work, and I'd be like, oh, that's actually not bad."

"But Kitase played some dirty tricks on me," Sakaguchi says. "Like the Kobayashi Maru."

In the movie Star Trek II: The Wrath of Khan, the Kobayashi Maru is a simulated rescue mission given to would-be Starfleet captains. The simulation is impossible to win and usually results in the deaths of the crew—it is simply meant to test a cadet's reactions to a no-win situation. Captain James T. Kirk, played by William Shatner, defeats the test by reprogramming the computer simulation the night before, allowing him to come away victorious, confounding his superiors.

Sometimes, Kitase would show up in the morning with an idea for a lavish, spectacular scene he wanted to write into Final Fantasy V. Perhaps he wanted all of the characters to fall off a cliff after a dramatic showdown. "There's no way we can do this," Sakaguchi would say. The program wouldn't be able to handle it. And yet, Kitase had done it.

"Well, last night, after you left the office, I had our programmers write a special program for me..." Kitase would respond. He'd gone behind the boss's back and had the programmers hack in his "impossible" concept, pulling a Captain Kirk.

"I admit that Kitase is probably better at coming up with spectacle," Sakaguchi says. So what, I asked him, did you do to counter that?

"Usually the more dramatic, moodier scenes," he says. "In order for me to have my moment, I wanted to make players cry."

Hearing this, I recalled an early scene in Final Fantasy V, when the party climbs up a mountain to search for Lenna's dragon. As you're moving through its plateaus and caverns, you start to see that the mountain is dotted with flowery purple bushes you've never seen before. But if you walk into one, there's a distorted effect on the screen and an unpleasant buzzing sound. If you check your status menu, you'll see that all of your characters are now inflicted with Poison, which saps hit points over time. You have to cure them all with Antidote items, or with curative spells, and then assiduously avoid stepping on any more purple bushes.

At the climactic scene of this dungeon, Lenna finds her dragon in a rough state, but sees, as we do, that the healing herbs on this mountain are behind a giant patch of poison shrubs. So she selflessly and agonizingly walks, while the screen buzzes and distorts, through the bushes and back with the herbs, then collapses. It's a brilliant bit of using a gameplay feature to foreshadow and explain a storyline sequence that wouldn't ordinarily make sense. And maybe even make a few players cry. That scene, Sakaguchi told me, was indeed one of his.