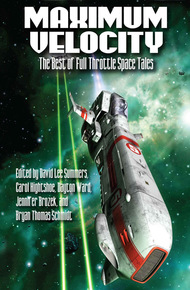 David Lee Summers is an author, editor, and astronomer living in Southern New Mexico. He edited the science fiction and fantasy magazines Hadrosaur Tales and Tales of the Talisman for ten years each along with the anthologies A Kepler's Dozen, Space Pirates, and Space Horrors. He's also the author of ten novels including Owl Dance and The Astronomer's Crypt. His short fiction has appeared in such venues as Cemetery Dance and Realms of Fantasy Magazines. When not working with the written word, David operates telescopes at Kitt Peak National Observatory. Learn more about David at davidleesummers.com.

Our other anthology, Maximum Velocity: The Best of Full-Throttle Space Tales, is edited by a whole pack of editors, David Lee Summers, Carol Hightshoe, Dayton Ward, Jennifer Brozek, and Bryan Thomas Schmidt. Each of these people (all friends of mine) edited an issue of the space adventure series, Full Throttle Space Tales, and each editor picked their favorite pieces to include in this anthology. – Kevin J. Anderson

Welcome to Maximum Velocity, an anthology which collects the best stories from a run of six books known collectively as the Full-Throttle Space Tales Series, published between 2008 and 2012. My name is David Lee Summers and I'm joined by editors Carol Hightshoe, Dayton Ward, Jennifer Brozek, and Bryan Thomas Schmidt. We'll be your hosts on this series of adventures set in the distant future. As you prepare for this ride, I hope you'll allow me a moment to reflect on the journey so far.

In 2007, David Boop approached me on behalf of his publisher, David Rozansky, about editing an anthology of fun, action-charged tales about space pirates. I put out a call and started collecting stories. David, David, and I met later that year at MileHiCon in Denver, Colorado along with some other editors and authors—most of whom, fortunately, were not named David. Over dinner we came to realize that we could tell action-charged stories about many types of people. We made plans to collect anthologies about women in space, soldiers in space, vampires in space, and more.

Over the next five years, our team of editors collected six anthologies. Space Pirates was the first followed by Space Sirens edited by Carol Hightshoe, which told stories of strong women exploring the stars. Dayton Ward, well known for his Star Trek tie-in work was tapped to edit an anthology about line soldiers fighting among the stars called Space Grunts. I returned to edit the series' fourth volume about the monsters and scary things one might find while exploring the cosmos called Space Horrors. Jennifer Brozek, already a well-regarded editor in her own right and who went on to garner a Hugo nomination, suggested an anthology about vagabonds travelling the spaceways called Space Tramps. Last but not least, Bryan Thomas Schmidt, who has also since garnered a Hugo nomination for his editorial work, collected Space Battles.

As time went on, the original publisher of the Full-Throttle Space Tales decided to move away from publishing fiction and the anthologies were taken out of print. Despite that, those of us who had put so much time and love into this series felt there was too much good material to allow it to languish, so we decided to collect the very best of the Full-Throttle Space Tales and present them under one cover.

Selecting the best of a good set of stories, especially ones you're attached to is never easy. Our process was to give each of our anthologies to the next editor in line and let them pick their favorite stories. So Carol Hightshoe selected her favorite stories from Space Pirates, Dayton Ward selected his favorites from Space Sirens, and so on. The upshot is that each story in this volume has been vetted not just by one editor, but at least two. Even though most of the editors had stories in these collections, none of them nominated their own. Once the selections were made, the original editors went back and worked with the authors to polish the stories and really make them shine for this volume. Each story is preceded by a new introduction by its editor.

Okay, that's the pre-flight talk. Make sure those tray tables and seats are in the upright position for takeoff, because it's time to open the throttle and accelerate to maximum velocity!