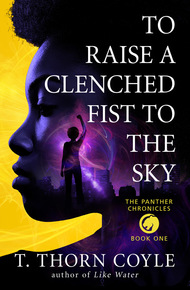 Their non-fiction books are Sigil Magic for Writers, Artists & Other Creatives, Kissing the Limitless, Make Magic of Your Life, Crafting a Daily Practice, and Evolutionary Witchcraft and the essay collection Resistance Matters. Their writing appears in many magazines, anthologies, and collections.

An interloper to the Pacific Northwest, Thorn often talks to crows, squirrels, and trees.

To Raise a Clenched Fist to the Sky: The Panther Chronicles, Book One by T. Thorn Coyle

Eighteen-year-old Jasmine Jones, hereditary sorcerer, steps off a Greyhound bus in Oakland and walks straight into an uprising.

Battling the shadowy danger stalking her family and friends, Jasmine must shake up the Association of Magical Arts and Sorcery and find her place among the Black Panthers, who keep secrets of their own.

The Black Panther movement and WIZARDS. I couldn't be more excited to have this narrative as a reader which weaves together the struggle for justice and the connective nature of magic. – Terah Edun

I stepped off the Greyhound from Los Angeles, stinking of body odor, barbecue chips, and the beer the old man spilled all over my green corduroy bell bottoms.

I was a long way from the quiet streets of Crenshaw.

My mouth was foul. Fuzzy teeth and a tongue coated with nasty. Chips and Coke didn't taste so good once they were three hours gone.

I badly needed a bath. And to wash my clothes. Some things you just couldn't magic away. Dirty clothes and stinky armpits were on that list.

If I could've magicked myself up here without getting on that bus, I would've done that too. Believe me.

The bus depot was dingy, the gray walls smeared with layers of grime. There was a bloodstain on the wall that I didn't want to know anything about. The place smelled like old coffee and piss. I wanted the hell out of there, but had to admit that I felt a little nervous being on the street in a strange city by myself.

No time like now. After folding the brocade coat that had served as my blanket into my heavily stuffed khaki duffel, I hoisted the bag's straps over my shoulders. I had no idea how I was even going to walk five blocks with the thing on my back, let alone figure out how to walk to my aunt's house on the edge of Chinatown.

I had no idea where Chinatown even was. Just had a vague idea that it was walkable from where I was. In nice weather without a fifty-pound duffel on my back.

I was starting to regret packing books in with my clothes. Then I remembered: I could adjust the physics just a small amount. I magicked the bag a little bit lighter. There was nothing I could do about the long-sleeved navy T-shirt tied on the handle, smelling like old beer.

The bus trip had been a dance of staving off boredom and keeping grabbing hands off my breasts and thighs.

I'd started with a seat to myself, curled against the scratched-up window, reading Langston Hughes. When we stopped in Fresno, this old white dude got on and made straight for the skinny black girl traveling alone.

You'd think after the first time I sent a jolt of magic to bite his pink sausage fingers, the old dude would've given up. But no. He had to try again, just to make sure.

The second time, the blue spark burned his hands and I sent a jolt to his balls at the same time.

That's when his brown-paper-wrapped beer spilled all over me.

But at least it got him to change his seat, as I mopped myself up as best I could with the old navy T-shirt from my bag. I tied it around one of the duffle handles in an effort to keep the stink of cheap beer off the rest of my clothes.

My dad—who doesn't have a magical bone in his body, bless him, and doesn't understand protection spells—hadn't wanted to put me on that bus, but how else was I supposed to get up to Berkeley for school?

I talked him out of Amtrak because the cost was almost double and the bus was faster, and had begun to regret it almost immediately. But I was here now, and that's what mattered, with the rest of the summer to settle in before the semester began.

My Aunt Doreen had moved up here when I was just a girl, and had a little house between Old Oakland and Chinatown with an extra room off the kitchen. I could stay there in exchange for some housekeeping.

While my parents could pay my tuition just fine, they just couldn't really afford a dorm, not without more juggling than I felt okay with. I wasn't sure I wanted to live surrounded by strange white folks like that anyway. School was going to be adventure enough, I thought, without having to figure out if I could trust the people across the hallway when I fell asleep at night.

Sure, I could magic the doorknobs every day. And my mother taught me several protections for situations involving rape or assault. But no one has enough magic for the daily little jabs and comments, the coffee spilled on class notes, or the toothpaste tube squeezed out in your toiletries bag. I'd heard the stories.

I was sure to figure all that stuff out, too, eventually, but it'd be nice to acclimate to it all bit by bit, instead of all at once, by force.

It was a long-ass ride through the Central Valley and on up the state, and here I was, about to step outside the big Deco doors banded with metal.

Nothing to do but move on through.

The breeze hit me, frizzing out my afro, carrying some of the bus stink away. The breeze smelled like ocean, just around the edges. Different than Bay Street Beach in Santa Monica. The beach of my childhood smelled like ocean, sunny sand, and barbecue, this smelled a little more earthy. Brackish.

Then I remembered the water would be coming off the bay, and not the ocean, accounting for the difference in the smell. Just the same, it was a little slice of home. Some of the tightness in my belly eased up and I felt my magic boost.

Exiting at 20th and Taylor, I looked around. A lot of parking lots and warehouses. Not much right here. The driver had told me to walk down Taylor, heading to Uptown. A right on Broadway would take me near where I needed to go.

Waiting to cross the street, I saw the rained-on white paper, wheat-pasted to the crumbling bricks of an industrial-looking building. "The Ten-Point Program of the Black Panther Party for Self Defense."

The name alone electrified me.

The country was still reeling from the assassination of Dr. King and the Panthers were stepping up their game. Black Power was fueled by Black Rage.

My parents had tried to steer me as far away from the Panther materials as possible, though I'd heard their murmured, worried conversations about the Panthers showing up on the State Capitol steps, rifles slung across their shoulders. And the fact that there was only one beach in Southern California we could enjoy during the summer? My parents tried to protect me from that news as well.

My parents, and the rest of the Association—The Association of Magical Arts and Sorcery, or AMAS—had no truck with revolution. Magic was the only important thing to my mother, and our family was the main thing that concerned my dad.

Though I knew they'd started organizing in LA, the Panthers had seemed so far away from the neat houses and small, trimmed lawns of Crenshaw. Less than five minutes after my pulling up in Oakland, here they were.

Standing on that dirty sidewalk stained with grease and garbage, I was frozen in place by the first point: "We Want Freedom. We Want Power To Determine The Destiny Of Our Black Community."

The points went on, each one more radical than the next. An end to capitalist exploitation. An end to incarceration. Trial by a jury of our peers… And then, point number ten: "We Want Land, Bread, Housing, Education, Clothing, Justice and Peace."

The boom of voices came toward me, echoing between the canyons of buildings. I couldn't make out what they were saying at first, but they were coming from the direction I needed to walk, so I headed that way.

Maybe not a smart move, but here I was. The rumbling and shouting finally resolved into words.

"Free Huey! Free Huey!" The words were punctuated by claps and stomps. I magicked the duffel slightly lighter and hurried toward the shouting, ducking down what I thought was a street but what was really an alley.

Shit. My parents were going to kill me. Sweat was running down my sides by now, but I didn't want to let the voices get past me without figuring out what they were shouting for.

I reached the spot right where the alley hit the street. Broadway.

And there they were. The voices that had sounded so loud to me. Around thirty people, mostly black, with some Latino faces in the mix. A couple of white folks brought up the rear.

I ran up to one of the women, marching head high, brass earrings almost touching her shoulders.

She glanced at me, taking in my afro and green cords.

"Huey Newton's trial is starting at the courthouse. We're going to support."

My parents were so not going to dig this. They liked their revolution at a distance. And their daughter even further from the center of it all.

I joined the group. When we hit 11th street, we marched toward what I would come to know was Lake Merritt. I could see the white, Art Deco rise of what must be the courthouse ahead of us.

The closer we got, the more people I saw, all heading toward that white stacked building with the flagpole spire. The blue waters of the lake shimmered just beyond.

There were thousands of people. Thousands. All shouting and holding signs. Children rode on shoulders, raising chubby arms into the air.

And then…hundreds and hundreds of Black Panthers, marching in formation. Berets and leather jackets on, despite the warm July air.

They were the most beautiful thing I'd ever seen in my life.

Clutching the duffle bag straps on my shoulders, I wept.