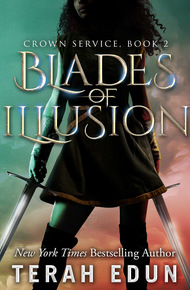 Sara Fairchild, duelist and combatant, is out for vengeance. Her father was betrayed. Her mother is dead. All she has left is her desire for revenge and a quest for answers.

Now a member of the Mercenary Guilds' elite guard, she fights on the front lines of her empire's first civil war. But Sara's priority isn't winning the war for the crown or empire. It's finding out the true circumstances of her family's downfall while keeping one mild-mannered scholar alive.

As emotionally detached as she is from everyone around her, Sara can't seem to shake the stubborn affection of her one friend. When she stumbles upon the secrets of the leadership of the Empress's highest command in the field, Sara will be forced to decide how deep her loyalty is to the crown…before they kill her off and everyone else standing in their way.

Secrets aside everyday on the warfront is a life under threat from the ultimate enemy and yet as Sara quickly finds out, darkness resides on both sides of the war lines.

Crown Service is my own adventure fantasy that takes the magic of a diverse young woman setting off on her own journey and pits her against friends and foes as she battles in service to her throne. – Terah Edun

Today had just gone from bad to hell on earth.

Sara was beginning to think something or someone was out to get her—besides the Red Lion Guard mercenaries who had killed her mother.

She didn't like it. Being surprised or being surrounded twice in one day was more than enough for her. But then, as now, it was hard to get the upper hand. It might have been two humans against one but that one had a ravenous army behind him. In contrast Ezekiel and Sara were armed with meager weapons compared to the sharp teeth and feral looks in the eyes of the pigs who might have just spotted more dinner to fill their bellies.

Ezekiel gulped and backed toward Sara.

She angled her sword, and he reached to nock an arrow in the crossbow he kept strapped across his back.

"Steady," Sara said quietly. She didn't want to make any sudden movements and incite violence she wasn't certain she could survive. Because death by pig was very different from death by the sword or human hand. One death was honorable. The other would make her infamous in a very bad way.