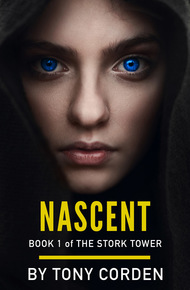 He also loves to read. All his life he has loved creating worlds and stories with his imagination. His family finally convinced him to let others read some of his work. He lives with his wife in Brisbane, Australia. They have three children and two children-in-law. He loves his family.

Atherleah Carroll grew up in a negative-tax family in the gang-controlled suburbs of Brisbane at the end of the twenty-first century. From the age of six, she decided that she wanted more and with the help of her local gang-leader, she learned the skills to escape the relentless pressure to accept a life of mediocrity. On her sixteenth birthday, she was inadvertently implanted with a Neural Enhancement Chip instead of the free Government provided basic level personal AI. This mistake not only removed the limits placed on the AI but also broke some of the Government instigated control parameters. Leah's life rapidly became a battle, both in the virtual-multiverse and in real life.

On the advice of the local 'boss', Leah began playing the virtual fantasy game Dunyanin to earn the money she needed to live at the local POD facility and help with her education. With the help of her rapidly evolving AI, she has not only thwarted attempts by the government to limit her opportunities but evaded kidnapping by virtual slavers. Co-opted by several Virtual Security AI Leah has helped shut down a virtual sweat-shop which used mind-controlled players to farm for resources. The family, which runs the virtual crime syndicate, has cornered Leah in the depths of a virtual-mine and sent twenty player-mercenaries to capture her. Fleeing through a hidden doorway into a mirror mine operated by goblins Leah hopes to escape her pursuers.

Tony Corden has won readers with the depth of both his characters and his futuristic world. With the added twist of a heroine grappling with her AI neural implant, the Stork Tower is a fast-paced, engaging series in the best of the litRPG tradition. – Anthea Sharp

It was push-back time. She looked him up and down and said, "Half-breed! That's cute coming from someone whose momma musta gotten down and dirty with whatever it is your papa was."

Although she saw the sword coming, she steeled herself and completely ignored it. It swiped through her and crashed into the floor, sending up a shower of sparks. The game wouldn't allow preemptive kill strokes in town, but it did allow duels and lethal retaliation, if and when you were attacked. As long as Leah ignored the orc, she was untouchable. If she retaliated, then it was an accepted duel, and the fight was on. The lack of resistance to the sword put Jason off balance and Leah took the opportunity to grab the front of his armour and pull him to the floor. She turned him as they fell and ended up on top of him. A spike through each eye and a knife in the ear and it was all over. She stood, then wiped the knife theatrically on her trouser leg before sliding it back into her belt.

She looked around the suddenly quiet room. Picking up the money bag Jason had dropped she said, "A round of drinks on the half-breed bitch!" She paused, then added, "And I don't mean me!"

The room dissolved into laughter except for Kasim and his two friends who were standing near him. She picked up everything Jason had dropped and with the sword balanced on her shoulder made her way to the barkeep to pay up. Kasim, Shiva and Bullseye started toward her but slowed as the room went silent. Everyone slowly stood, staring at them, and then began slowly unsheathing their weapons. A huge barbarian spoke into the silence, "I reckon you three best move along. Your friend got what he deserved."

The three changed direction and headed for the door. As they left Kasim called back over his shoulder, "You'll get yours, bitch!" Once again the whole room burst out laughing. The barbarian gestured for Leah to join him and his friends at his table. Leah smiled and nodded in acknowledgement. She motioned to the barkeep where she would be and headed over.

"Name's Thad, that's Amy, James and Butthead," the barbarian said as she sat down, indicating toward his table-mates, two humans and a dwarf.

Leah ignored the byplay but acknowledged the three as she sat down. "Hello Thad, hey, thanks for the help there. I appreciate it. I'm Atherleah."