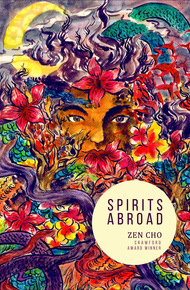 Zen Cho was born and raised in Malaysia. She has been nominated for the Campbell Award for Best New Writer and honour-listed for the Carl Brandon Society Awards for her short fiction. Her debut novel Sorcerer to the Crown (Ace/Macmillan), about magic, intrigue and politics in Regency London, won a British Fantasy Award for Best Newcomer and was a Locus Awards finalist for Best First Novel. Her short story collection Spirits Abroad was a joint winner of the Crawford Award. She lives in the UK.

"If you live near the jungle, you will realise that what is real and what is not real is not always clear. In the forest there is not a big gap between the two."

A Datin recalls her romance with an orang bunian. A teenage pontianak struggles to balance homework, bossy aunties, first love, and eating people. An earth spirit gets entangled in protracted negotiations with an annoying landlord, and Chang E spins off into outer space, the ultimate metaphor for the Chinese diaspora.

This dazzling collection by Malaysian author Zen Cho justly earned itself the Crawford Award, while Cho went on to write the wonderful Sorcerer To The Crown, which I was lucky enough to provide a blurb for when it came out. Cho's humour and compassion shine through every word in this enchanting collection. – Lavie Tidhar

The aunts had a horror of talking about death. In life this had been an understandable superstition, but it seemed peculiar to dislike the mention of death when you were dead.

Ah Lee kept running into the wall of the aunts' disapproval headfirst. They were a family who believed that there was a right way to do things, and consequently a right way to think. Ah Lee always seemed to be thinking wrong.

She could see that as her caretakers the aunts had a right to determine where she went and what she did. But she objected to their attempts to change what she thought. After all, none of them had died before the age of fifty-five, while she was stuck forever at sixteen.

"It's OK if I don't follow you a hundred percent," she told them one day in exasperation. "It's called a generation gap."

This came after Sa Ee Poh had spent half an hour marveling over her capacity for disagreement. In Sa Ee Poh's day, girls did not answer back. They listened to their elders, did their homework, came top in class, bought the groceries, washed the floor, and had enough time left over to learn to play the guzheng and volunteer for charity. When Sa Ee Poh had been a girl, she had positively delighted in submission. But children these days ….

Once an aunt got hold of an observation she did not let go of it until she had crunched its bones and sucked the marrow out, and saved the bones to make soup with later.

"It's a branded clothing," said Aunty Girl. She was the cool aunt. "American shop. They sell jeans, very expensive."

"Why do you care so much about brands?" said Ah Ma. "If you want clothes, Ah Ma can make clothes for you. Better than the clothes in the shop also."

So Ah Lee did not tell them about the boy. If the aunts could not handle her having thoughts, imagine how much worse they would be about her having feelings. Especially love — love, stealing into her life like a thief in the night, filling her dried out heart and plumping it out.

Being a vampire was not so bad. It was like eating steak every day, but when steak was your favorite food in the world. It wasn't anything like the books and movies, though. In books and movies it seemed quite romantic to be a vampire, but Ah Lee and her aunts were clearly the wrong sort of people for the ruffled shirt and velvet jacket style of vampirism.

Undeath had not lent Ah Lee any mystical glamour. It had not imbued her with magical powers, gained her exotic new friends, or even done anything for her acne.

In fact Ah Lee's life had become more boring post-death than it had been pre-, because at least when she was alive she had had friends. Now she just had aunts. She still went to school, but she was advised against fraternising with her schoolfellows for obvious reasons.

"Anyway, what is friends?" said the aunts. "Won't last one. Only family will be there for you at the end of the day."

The sayings of aunts filled her head till they poked out of her ears and nostrils.

Yet here came this boy one fine day, and suddenly her ears and nostrils were cleared. Her head was blown open. The sayings of the aunts fluttered away in the wind and dissolved with nothing to hold on to. Love was like swallowing a cili padi whole.