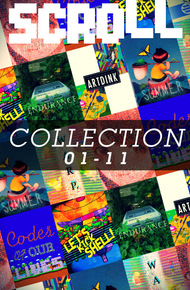 SCROLL is video game history uncorked -- deep dives into many different pockets of many different sizes from the last 25 years of games, and more often than not, stuff that few people have ever heard about. You'll read stories about fascinating games, forgotten developers, notable points in history, and overseas oddities, with an aim to educate and entertain without being disparaging for the sake of it. Whether you consider yourself a gaming neophyte or a connoisseur, SCROLL is a fun and refreshing look at game history. Because maybe you just don't want to read about old games in an old way.

StoryBundle is proud to present an exclusive compilation of the first 11 issues of Ray Barnholt's critically acclaimed video game magazine SCROLL, including both full .PDFs and Kindle-compatible versions of the layout-heavy cult title available for the first time anywhere:

SCROLL issue 01: Endurance—Celebrating the best of the Super NES.
SCROLL issue 02: Quests—Remembering the seminal Dragon Quest RPG series.
SCROLL issue 03: The Cute Issue—Four companies and 24 of the cutest games they ever made.
SCROLL issue 04: The Unknown Xbox—The journey of Microsoft's first console in Japan and its most obscure games.
SCROLL issue 05: Love is All Around—A full guide to the Love Plus "dating sim" series.
SCROLL issue 06: Codes of Our Lives—The Konami Code and more from the age of memorable game cheats.
SCROLL issue 07: Let's Kick Shell!—When Konami's Ninja Turtles games ruled the '90s.
SCROLL issue 08: The Totally Loaded and Fortified Irritating Spirit of Battle Unit Jaleco—Selections from the library of Nintendo third-party Jaleco.
SCROLL issue 09: Artdink: The Wild, Pure, Simple Life—The innovative simulations of the makers of A-Train and Aquanaut's Holiday.
SCROLL issue 10: Summer—Sony's "My Summer Vacation" series from front to back, and its creator Kaz Ayabe.
SCROLL issue 11: Warp—The games of Japan's maverick development studio and its head, the late Kenji Eno.

Amazing magazine-length overviews of fascinating Japanese developers - the issue on the late Kenji Eno's Warp is worth the price of admission alone. –Simon Carless

Artdink's journey began here, the railroad game that would form the fulcrum of their existence. Take the A-Train was released at the very end of 1985—just before Artdink was incorporated, as a matter of fact—and brought the admirable complexity of train system management, if not the allure of model railroads, to thousands of personal computer owners whose interests between the two probably overlapped. You are presented with three different areas in a world loosely based on America at the end of the 19th century, and in each one you have a mandate from the president to build a functional railroad that stretches from coast to coast. And it won't be easy, as only a few meters of track have been laid beside a fairly developed town, and the hilly topography makes for a daunting logical challenge.

Unlike the richer business and city development simulations of their sequels, the first two A-Train games were more focused on railroads and nothing but: building and organizing rail lines that stretched up and down the countryside in order to provide people with sustainable transportation. And it was in these early games where taking the A-Train was quite literal: your cursor of building and destruction was a round "A" icon that could only move along laid tracks and continue to build more—or build the requisite stations, or simply get out of the way of other trains coming by on their schedules. Indeed, your train is used to get other trains moving, and in the game's maps, your initial tasks will be to connect tracks to where a fleet of other trains—freight and passenger lines—sit idly by. Laying track and other construction can only be done if the A-Train is stocked with materials, which can only be picked up by the central station that provides them. In later games, the "materials" were an even more important bread-and-butter element to developing the city that needed to be properly funneled across the land, though its role in the original is naturally lessened; you get a nigh-infinite supply of stuff that's mainly used to extend the railroad.

Money is also not as important in this original A-Train than in the others—your main consideration is laying track, and how many tons of materials the train is carrying before you need to go back for more and lay more track. Financial disasters don't exist so much as good old-fashioned physical ones: Once you get the other trains moving, they have to be properly scheduled and routed on a 24-seven cycle, and any unfortunate collision means you can say goodbye to those trains. Likewise, if the A-Train crashes into another, it's Game Over. Couple that with the limited number of pre-made maps, and A-Train is more like a stage-based puzzle game than an outright sim.

You'll be forgiven for thinking this all sounds like the basics of Sid Meier's Railroad Tycoon, which came a few years after this first A-Train. Meier probably owes a lot to Artdink, but while there's many superficial similarities, the gameplay and design goals are quite different. Not to mention this was the mid-'80s to the early '90s, an extremely fruitful time for sim games that had room for many different ideas of varying executions, and not exactly plagiarism. Ironically, it's A-Train III that probably owes more to Railroad Tycoon, as it introduced deeper economic management—and you lose that one by going broke, not by crashing.

What's just as notable about Take the A-Train as a game is the technical environment in which it was born. The original games were released just early enough to, unfortunately, be victims of their own time, mostly because it was before the widespread use of mice in the Japanese PC market. That left the game to be played exclusively with the numpad, using it to direct your track-laying, switch menu modes to the station scheduler, and so on. The later Famicom version didn't fare much better, employing a long list of button combinations just to get anything done (Sega's 1989 Mega Drive port was relatively streamlined, and even had super-smooth scrolling better than any other version). Other limits are coded into the game, yet no less irritating: You're always required to curve tracks before taking them in another direction, which can lead to a mess if you're not precise, though you can always delete track by switching to "remove" mode and simply moving backwards). Similarly, you can't lay track at night, having to wait until 5:00 AM to keep going—though once dusk falls, the A-Train can rapidly return to the nearest station for more materials, if need be.

One could call this a humble beginning for the game that would soon become synonymous with Artdink, but Take the A-Train established a few not-so-humble precedents in sim games: the overhead view of the miniature landscapes predated SimCity's release by nearly five years; the resource management had barely been seen in anything other than an RPG, and the day-to-night cycle was one of the less-discussed features of the game that would soon become one of its most defining. Now that the track was laid, it was time for Artdink to get the engine going.