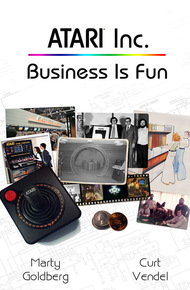 Martin Goldberg – A writer and programmer in the video game industry, Goldberg has had a lifelong fascination with all things electronic entertainment since first playing PONG and Tank as a child at his local arcadesin the 70s. As the former site director of IGN/GameSpy’s ‘ClassicGaming.Com’ and a current freelancer for Retro Gamer magazine, Goldberg has been writing about video games for 13 years. In 2004, Goldberg also founded the Electronic Entertainment Museum (E2M), a non-profit archive whose mission is to help preserve the history and artifacts of the video game and home computer industries. In line with this goal, he’s also a member of the International Game Development Association’s (IGDA) Game Preservation SIG, a hub and community for those interested in digital game preservation and history.

The true story behind the company and brand that was synonymous with ‘video games’ in the 1970s and 80s, told by the people who were there making history. Dominating both the arcade and home – and fueled by the public’s ‘obsession’ with technology, Atari pioneered high tech fun for a new generation. The ripple effect of Atari’s influence in technology and pop culture has resonated throughout the decades, and into the 21st Century.

In an age where Nintendo, Sony and Microsoft now dominate the consumer industry, Gen-Xers and those lucky enough to have grown up during the “Age of Atari” still cling fondly to the memories of this period.

With roots dating back to 1969, when Nolan Bushnell and Ted Dabney formed a small engineering partnership, these two California entrepreneurs took a chance and introduced an exciting new technology to the world at a time when pinball was king. Forming Atari Inc. on June 27th, 1972, together they launched a company that would come to dominate and innovate what people did with their leisure time.

Purchased by Warner Communications in 1976, the sale of the company to this entertainment industry titan would ensure Atari invaded all areas of American culture, enabling the company to stake its claim as a worldwide phenomenon. Rapidly expanding into other forms of entertainment, computers and advanced high-tech research, Atari’s innovation and influence was comparable to Apple’s preeminence today.

... that is, was until Atari imploded spectacularly in 1984, taking most of the US video game industry with it. As a result, its cadre of talented people and advanced technology were unleashed across Silicon Valley. Many of these individuals are still working in the industries they helped pioneer.

A gigantic (800-page!), crazily canonical history of Atari through 1984 - I guarantee you will learn something you never knew! –Simon Carless

I grew up in an era before zip codes, area codes, television and vend- ing machines, where my idea of entertainment was listening to "Sky King" on the radio (KGO in San Francisco).

My first engineering job was to design power supplies and video cir- cuits using vacuum tubes, and from there I have watched the development of technology my whole life, and for years, I was part of it.

Nolan Bushnell was my office mate at Ampex and had seen Steve Russell's Spacewar! game at Stanford Artificial Intelligence Laboratory in Palo Alto, CA. He thought it was the best thing ever and had me go back with him so I could see it for myself. After we had seen it together, he told me what he wanted to do.

Digital Equipment Corporation (DEC) of Maynard, Massachusetts had introduced a minicomputer called the PDP-8 in 1965. Nolan wanted to use this computer to time-share several play-stations and have people pay to play this Spacewar! game. By this time, advancing technology was old-hat to me so I said, "Let's do it."

We did some preliminary work on this concept to see what we needed to do to make this happen. Finally we did some number crunching and realized that there was no way to make this idea financially viable. The proposed project was dead.

All this silliness began when I designed a rather simple circuit that could replace the computer. We then came up with a novel approach to create a game played on a tv set and were very successful at it.

Unbeknownst to me, there have been many stories and books about what we did and how we did it that were based on rumors and guess-work. In 1994, Leonard Herman wrote a book called "Phoenix, The Fall and Rise of Videogames." Several years later, while doing some follow-up research, he came across my name and contacted me. It really surprised me to find out how much interest there was in all this stuff. I gave him the whole story about how all of this came about, including how I did the design work in my daughter's bedroom. That's how I found out that Nolan Bushnell had been telling everybody that he designed this whole thing in his daughter's bed- room. This had absolutely no basis in fact.

This didn't really bother me much until one day somebody calling themselves Nolan Bushnell posted on a website called AtariAge that "Dabney didn't even have a daughter." Nolan Bushnell knew my daughter Terri very well, and this was so upsetting to me that I answered the post. Nolan called me on the phone and told me that he just forgot. This was pure crap. As I dug in further, it turned out that almost everything he has said publicly about me and the early days of Syzygy/Atari was pure crap.

Enter Martin Goldberg and Curt Vendel. These guys had become video game aficionados and wanted to know everything there was to know about the beginning days of Atari.

Other than my brief involvement with the start-up, I know almost nothing about the video game industry, but Curt and Marty know practically everything. Based on the research that I've been a part of and that I've seen them do, this book is the culmination of over two generations of video- game development.

It was over forty years ago that this adventure began, and until about three years ago, my contribution to it had been obscured. I never thought it was such a big deal actually. In fact, I have been very surprised and grateful to find out that a lot of folks find this whole thing to be a very big deal indeed.

I have always prided myself on the ability to solve almost any electronic problem. Nolan asked me to come up with a circuit to replace a computer. I didn't know anything about computers but I did know what the circuit needed to do, so I did it. The rest, as they say, is history. I must say that I very much appreciate the recognition that I have had for the last few years. Thank you.

Computer Space was the birth of this phenomenon and PONG was that which gave it life. A whole lot has happened since then and this book will bring the reader up to date on all the comings and goings of video games and the people involved in making it happen.