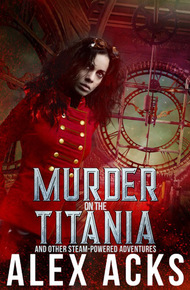 Alex Acks is a writer, geologist, and sharp-dressed sir. A collection of their steampunk novellas, Murder on the Titania and Other Steam-Powered Adventures, is available from Queen of Swords Press. Their biker gang space witch novels, Hunger Makes the Wolf (winner of a 2017 Kitchie Award) and Blood Binds the Pack, were published by Angry Robot Books under the pen name Alex Wells. For more information, see http://www.alexacks.com

Murder on the Titania by Alex Acks

Captain Marta Ramos, the most notorious pirate in the Duchy of Denver, has her hands full between fascinating murder mysteries, the delectable and devious Delilah Nimowitz, Colonel Geoffrey Douglas (the Duke of Denver's new head of security), a spot of airship engineering and her usual activities: piracy, banditry and burglary. Not to mention the horror of high society tea parties. In contrast, Simms, her second in command, longs only for a quiet life, filled with tasty sausages and fewer explosions. Or does he? Join Captain Ramos, Simms and their crew as they negotiate the perils of air, land and drawing room in a series of fast-paced adventures in a North America that never was.

Murder on the Titania and Other Steam-Powered Adventures includes 4 novellas and a short story about piracy, banditry, burglary, jail-breaking, several brilliant bits of detective work and all manner of otherwise lawless hijinks performed by the valiant Captain Ramos and her crew.

I love steampunk when it's well handled, and Wells' collection of linked short stories featuring the pirate Captain Ramos is pitch-perfect. Set in an alternate monarchist America, Wells draws on all the best parts of Victorian pulp fiction and adds a bi protagonist, queer sensibility, and a marvelous supporting cast. I devoured this one when I got it, and I'm delighted to share it here. – Melissa Scott

The lantern wobbled faintly, caught by the low thrum of the engine, boilers banked and waiting. The lantern was also at an odd angle relative to the ceiling.

This was due to the fact that the Engine, fondly called Diabola, currently sat at a severe twelve percent grade. The commonly used tracks through the Rocky Mountains rose much more gently; such steep grades were limited to hidden ramps cut into the side of the mountain.

It wasn't the most comfortable of angles for a person to work at, let alone rest, but Marta Ramos managed it with the ease of long practice. She watched the lantern through slitted eyes, her feet, clad in black leather cavalry boots, propped on a weapons locker. Thanks to the boilers, the air inside was close and heavy. She had her linen sleeves rolled up, revealing slim brown forearms pocked with shiny pink-white scars. Her normally wild, curly brown hair was pulled tightly into a braid that had been coiled into a bun and secured with several pins far thicker and sharper than those traditionally seen in a lady's hair.

"Hm?" She glanced up at the tall man framed in the doorway, head ducked and shoulders hunched to keep from bumping the ceiling. In silhouette his face looked strange, thanks to his carefully tended gingery muttonchops.

Meriwether Octavian Simms—known by preference as simply "Simms" to friend and foe alike—stepped fully through the doorway and poked at her feet until she dropped them from the locker. "Lights sighted on the ridge. They should be heading up the incline in about five minutes or so."

"Excellent." Marta stood, adjusting to the strange tilt of the floor with ease, and pulled on her coat. Scarlet velvet, the frock coat was both her signature and her one bit of flash. If she was to commit acts of robbery across the Rocky Mountains, she wanted her marks to know that they'd been seen to by a true pirate. "Do you have the new calculations from Masterson?" She took the slip of paper he offered and read it over quickly. Elijah Masterson had taken over the more annoying duties of engineer from her, thankfully freeing her up for the more interesting work of the actual raid.

"Don't know why you don't just do them yourself."

"We won't be a one ship operation forever." She nodded and returned the slip. "No math errors this time. We'll hit the rails properly."

"When have I ever led you wrong?" She flashed him a grin and popped open the weapons locker. Saber, machete, three pistols, were briefly checked and soon all arrayed on her person.

She waved a hand. "Technicality. No one had bothered to tell me we were running seven tonnes light. I'll not be held responsible for that. My calculations were perfectly sound."

"Took two years off my life and an inch off my height."

"The height you can afford. You're a monstrosity. Don't tempt me to do it more often." Captain Ramos was quite tall for a woman, enough so that it made most men uncomfortable. Simms topped her by a few inches; some found that comforting before it was made abundantly clear that he was her lieutenant, not the other way around.

She handed Simms his own set of weapons, snapping her fingers at him when he tried to wave off the machete. "Required, Simms. Do stop complaining. It doesn't suit a man of your years." She sincerely doubted that any Infected would be encountered on a train, but stranger things had happened in her lifetime. She preferred to not be surprised, all told, and she'd found that it was always best to have a diverse array of tools, whether for engineering a solution or fighting off a ravening horde of Infected.

"My advanced years, yes, not much more advanced than yours." He hung the heavy, thick blade from his belt.

"Lights even with our position, sir!" the lookout, Gregory Kinzer, called back.

"Excellent, Mister Kinzer." Captain Ramos took up her hat and slapped it onto her head. "Mister Cavendesh, sound the general alarm!"

"Aye, sir!" Amelia Cavendesh caroled back from the front of the engine. She had once confided in Marta that her original goal had been to gain acclaim as an opera singer. While she had never been entirely clear what had scuttled that ambition, she was still quite dedicated to the cause of keeping her voice in training.

A moment later the lights dimmed, power rerouting entirely to the engine itself as the generators labored, spinning up the automated coal conveyers and bringing the boilers back to full roar. The brass alarm bells pealed down the length of the engine, alerting the crew to secure themselves immediately.

Simms slammed the weapons locker shut, secured it, and hurried to the front, Marta hot on his heels. In the short hall between aft rooms and the cab, the rest of the crew had secured themselves to walls with leather harnesses there for that purpose. Marta and Simms slipped into the last two open spots, hurriedly buckling themselves in place.