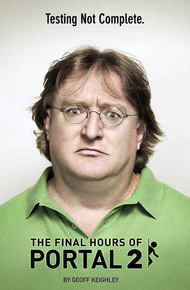 Longtime game journalist Geoff Keighley is the host and executive producer of Spike TV's GTTV, as well as The Bonus Round on GameTrailers.com. The recipient of TJFR "Top 30 Journalists Under 30" award in 2004, Keighley has written for Entertainment Weekly, TIME, and Business 2.0. He is also the co-chairman of the Game Critics Awards.

The Final Hours of Portal 2 (Ebook and Steam Key!) by Geoff Keighley

The Final Hour of Portal 2 takes you deep within the top-secret offices of Valve, creators of Half-Life, for an unvarnished look at the creative process behind the acclaimed video game Portal 2. Journalist Geoff Keighley was granted unprecedented "fly on the wall" access to Valve over a total of three years to create this extensive 15,000 word experience, available on this StoryBundle in two formats - via eeook (text and photos) & an app redeemable for PC/Mac with a Steam key (exclusive videos, interviews, interactive experiences, and other surprises.)

From the hush-hush Portal prequel that was shelved to the last minute scramble to complete the game's story, The Final Hours of Portal 2 is a gripping and dramatic story brought to life by Keighley - with the Steam app going beyond conventional journalism to offer 360 degree panorama photos of the Valve office and design labs, Jonathan Coulton's Portal 2 song in various stages of development, and a host of other features.

The ultimate insider's look into the making of one of the best games of the last decade, with some fascinating bonuses in the Steam app version. –Simon Carless

It's four int he morning and Erik Wolpaw’s alarm clock doesn’t go off. That’s because he doesn’t own an alarm. His body just knows it’s time to get up at the same moment every day, but only after a luxurious eight hours of sleep. The same eight hours he gets every night. These days he’s approaching middle age, but even back when he was in high school in Cleveland, Ohio – and nearly flunking out – neither girls nor his activities as part of a mischievous hacker group known for credit card fraud could shake his inveterate sleep routine. “It was great to be bad-ass until 8 p.m.,” he now says. “But nothing was as exciting as eight hours of sleep.”

Tiptoeing around the house in darkness, Erik puts on a flannel button-down, says goodbye to his wife Diana, checks that his 11-month-old son Jack is soundly sleeping, and pulls out of the driveway in his Ford Taurus.

It’s a normal start to the day. But tonight might be different. Tonight, February 16, 2011, might be the night Portal 2, the new video game Wolpaw co-wrote at Valve in Seattle, will be finished after more than three arduous years of development. The question is, will he be awake when this happens?

Spend enough time around the video game industry and a pattern emerges that’s as regimented as Wolpaw’s sleep. Game companies get ossified into a schedule of releasing new sequels like clockwork every 12 or 24 months. But Valve, an independent studio of over 250 world-class artists that Forbes magazine estimates is worth as much as $4 billion, thinks different. This omnificent developer, best known for its legendary Half-Life series of first-person action games, has spent the last 14 years inspiring gamers and the industry with bold new ideas. At Valve, employee excitement – not an Excel spreadsheet – is the sole metric used to evaluate the company’s next move.

“Once you’ve had success, your gut reaction is to stop and just keep doing what you’re doing,” says Valve founder Gabe Newell as he saunters down a long office hallway in his trademark un-tucked Ralph Lauren polo shirt. “And then there are other people who say, ‘We don’t really have a choice here. We have to continually innovate.’”

Portal, a college project turned Game of the Year winner in 2007, did just that with its brain-bending puzzles, innovative gameplay, and witty dialogue. The game was named after your weapon: the Aperture Science Handheld Portal Device (ASHPD), a gun which fires two glowing ovals into walls, ceilings, and floors. The ovals mark the openings to an invisible portal. Step – or fall – into one oval and you come flying out the other, which hopefully gets you closer to the solution, an exit elevator.

Now Valve is only steps away from finishing the sequel, Portal 2. Seventeen steps to be exact.