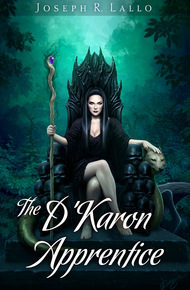 The Book of Deacon Book 4: The D'Karon Apprentice by Joseph R. Lallo

The D'Karon Apprentice is the long-awaited sequel to the acclaimed epic fantasy, The Book of Deacon Trilogy. It is a direct follow up to The Battle of Verril.

I write in a handful of series. At least three main ones and assorted spinoffs and one-offs. That means that I tend to violate the popular self-publishing wisdom of releasing new stories in a given series rapidly. The D'Karon Apprentice is a fine example of that. It is the direct follow-up to The Battle of Verril, but was published a staggering four years afterward. That's several eternities in self-pub time. Despite this, the fans welcomed it with open arms, thanks in no small part to four years of experience producing a much cleaner, slicker book. So much so that I didn't need to do a StoryBundle edition of this one, because it was actually formatted properly the first time! – Joseph R. Lallo