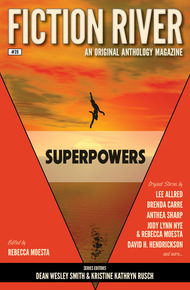 Many wish for superpowers. But even Superman has his kryptonite. These fifteen stories of super powerful young heroes/heroines demonstrate the humanity possible even among those possessed of great gifts. In this anthology for all ages, join a young girl who must protect those she loves most from a powerful evil, a young goddess who must decide whether to embrace her powers, and a young boy who must choose between superpowers and loyalty. This latest volume demonstrates why Adventures Fantastic says: "If you haven't checked out Fiction River yet, you should. There's something for everyone."

I watch waaaay too much superhero television. I know I'm not in the CW's prime demographic, but I'm one of its most diligent viewers. I watch everything, from Supergirl to Arrow. Even when it's stupid. Especially when it's stupid. Because then I have a chance to explore—in my own mind, usually—what makes the idea stupid and why I don't believe it.

I'm also the first in line for all the superhero movies. I watch the trailers over and over, waiting for the Easter eggs. I also watch the spin-off shows, particularly the Marvel shows on Netflix, which are grim and dark and noir, which I absolutely love.

My very favorite superhero is the Batman, not because of his extra-special powers, but because he doesn't have any. He's just a guy with some cool tech who takes matters into his own hands. And, oh yeah, he's very grim and very dark.

So when Rebecca Moesta proposed Superpowers to Dean and me, I have to admit I was a bit leery. Rebecca had given us a Young Adult Fiction River before, but Sparks seemed more suited to YA content, at least to my mind. Then I went on a YA binge, and realized that some of my ideas about YA fiction were stuck in the previous century. Perhaps the book that convinced me the most was All American Boys by Jason Reynolds and Brendan Kiely, which won the Coretta Scott King Author Honor award.

The boys in that book were just trying to live their lives, and in so doing, became everyday heroes. They also lived in a noir world.

So, I figured, Rebecca's superhero anthology could include noir. And it does. But it also contains humor and pathos and heart. Lots and lots and lots of heart.

From their earliest beginnings, superheroes have been metaphors for our better selves. Superman, born outside of the United States, so embraces our country that he embodies Truth, Justice, and The American Way. Wonder Woman got her start in the 1940s, while women were serving the cause at home by doing all those jobs that women had been told just a decade before that they were too delicate to do. Spider-Man appeared during the Baby Boom era, when that generation was just beginning to discover its own strengths, strengths that were different from those of their parents.

The kids in the Superpowers stories live that metaphoric larger-than-life existence. They will face questions the rest of us only dream about. Maybe some of them will become repeat superheroes.

Although it doesn't matter. Because in these stories, the kids are the heroes. Not their superpowers. Not the secret sauce or radioactive spider that gives them abilities the rest of us can only dream about. But the kids' innate sense of right and wrong.

That's the other thing we ask of our superheroes. We ask them to fall on the right side of the line, every time. Otherwise, they'll become super villains—as a few of the characters here struggle with.

What makes a superhero? Is it the superpower? Or the super-willingness to block a bullet for someone weaker? Or is it something else entirely?

You'll find the answers to those questions and more inside this volume. Superpowers has its own superpower: the power to make us all believe, if only for a little while.