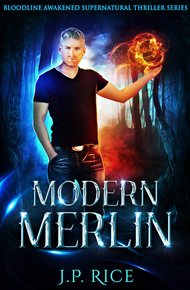 J.P. Rice is an urban fantasy author who loves mythology and magic. He was born and raised in Pittsburgh where his current series takes place. He has a passion for charity work and would like to supply underprivileged children with books and eReaders.

Mike Merlino has been down and out since his mother died when he was ten years old. Her murderer still prowls the town. Mike decides he is going to avenge his mother's death by going after the immortal warlock.

A chance meeting with a wingless faerie presents the prospect for Mike to learn magic. After initial resistance, he realizes this might be his only chance to get justice and begins training.

Will Mike learn enough magic and track down the killer?

Or will the murderer find him first?

The three young men plunged deeper into the creepy forest darkness, with a legendary murderer on the loose. Mike, Gary and Kyle stumbled through the two-square-mile, oak tree laden-forest known as Houlihan's Square.

None of the locals dared to enter the abandoned homeland of George Houlihan, the immortal man believed to be responsible for scores of deaths over the past two hundred years.

"Why are we going directly into this murderer's backyard? Anyone?" Kyle asked.

"Man, you scared." Gary laughed and slapped Mike on the back.

"I'm not scared of anything." Kyle pointed his beefy index finger in Gary's face. "You got that?"

The heavily intoxicated friends trampled through the dark woods using the half-moon and stars as a guide. Mike and Gary had brought flashlights but they didn't want to turn them on and risk being spotted.

Mike chugged the rest of his Milwaukee's Best lager and tossed the can aside. He belched and wiped some foam from his mouth with his forearm.

Kyle stopped. "Did you guys hear that shit?"

Gary held his hands on either side of his mouth and called out, "George. Oh George. Hey George, come out and play."

Kyle took two steps to his left and punched Gary in the shoulder, almost knocking the smaller man down. "What are you doing? Are you crazy?"

"There you go again. Being a little bitch." Gary gingerly rubbed his shoulder and continued heading toward the heart of the dense woods.

"I'm not scared. And you two alkies should be glad I'm here. You both are drunk out of your minds. I shoulda never even drove you two here."

Mike pulled down the zipper of his camouflage shorts and began to urinate on the trunk of a mighty oak tree. "Hold up, y'all. Gotta drain the main vein."

Kyle said, "Not funny. How much farther do you guys want to go in? We been walkin' in these stupid woods for at least twenty minutes."

Mike swayed back and forth, dribbling on one of his Nike Air shoes. He turned toward Kyle, forgetting to zip his shorts back up. "We ain't stopping till we get to the Circle. I got a bone to pick with this so-called murderer."

Kyle spun around a few times. "Where'd Gary go?" He whispered into the woods, "Yo, G, where you at? Stop playing, man." He turned to Mike. "You see where he went?"

Mike ripped a twelve-ounce can of Milwaukee's Best from the plastic six-pack holder hanging from his cracking leather belt. "You want a brew, Kyle?" He put his hand over the last warm can left on his hip.

Kyle held up an open hand and waved him off. "Nah, man. I can't think about drinking right now. I got that metal taste in my mouth, and I feel like I'm gonna yak. We gotta go find Gary. Now. I hope he's not trying to scare us, 'cuz I'll beat his ass into pulp if that's what he's doing."

Mike tried to keep up with the situation but his severe inebriation was seriously inhibiting his abilities. "Gary was here?" Mike squinted his eyes and peered into the woods as he rotated around. He stumbled to one knee and had to wait a few moments to regain his balance, then stood up too fast and scrambled to grab a tree branch above his head. He held on until his vision cleared and his balance returned.

"If we don't find Gary in five minutes, I'm hightailing it out of this spooky place," Kyle said.

An unimaginable scream of sheer agony ripped through the eerily quiet forest. Continuous high-pitched shrieks of terror only served to slightly muffle the background growling and chomping sounds.

"I'm out," Kyle announced, backing away from the sound, his eyes about to pop out of their sockets.

The yelps of pain acted like a smack of sobriety across Mike's face. "Wait, hold up. Did you hear that?"

Kyle kept walking. "Yes, I fucking heard it. Why do you think I'm trying to get away from it? Come on."

Mike started to follow Kyle yet suddenly stopped. "I gotta go back."

"What are you talking about?" Kyle slowed down but kept moving.

Mike shook his head slowly. "I have to go back. I have to kill him. For my mom."

"Dude, that's a stupid plan. He might have killed your mom, who knows, but if you go back, he's gonna kill you, too. Guaranteed." Kyle nervously yanked his long bangs.

Kyle finally stopped walking and turned around. "Man, you keep saying that. What are you talking about?"

"Don't worry about that. I'm going back and I'm going to kill him for my mom." Mike turned and took two steps.

Kyle slapped his firm palm on Mike's shoulder. "Come on man, stop playing. You know I'm going to get lost in these woods without you. Let's just get out of here."

Mike wiggled his body around until he shed Kyle's giant hand. "I can't. I just can't. I made a promise to myself that I was going to kill George one day. Today's the day. Or night."

"If you go toward that sound, you're a lunatic. That's all I know. I'm going this way." Kyle pointed and stomped away.

In the blink of an eye, Mike stood alone.

Despite the life-or-death scenario, peaceful visions of the past flashed in front of his face.

The house on Smithfield Street.

Go on, Micheal. Make a wish.

Mike's trip down memory lane was derailed by a fetid stench that reminded him of rotten meat. He pinched his nose and breathed through his open lips and clenched teeth to keep from throwing up.

Terror plucked at his heartstrings, creating a spine-chilling, staccato symphony.

He wanted to avenge the death of his mother, but in his inebriated state, he hadn't brought a weapon. The spur-of-the-moment decision now left him frozen in place. His scalp crawled. A force centered in the pit his stomach, sending pulsing waves of unhinging fear throughout his body. His glazed eyes, staring off into the abyss, only found darkness.

The moon, although only half-full, shone down like a spotlight in a cylindrical shaft of gleaming brightness. It revealed an ugliness only a handful of people had seen and lived to tell about. He or she appeared to be an amalgamation of the greatest horrors Dante Alighieri had encountered on his voyage to the underworld with Virgil. Had the devil's spawn been released on earth?

George looked like a wild boar standing upright. Mike stood 6'2" and gazed up at the stout beast that seemed to be hovering just above the ground about twenty feet away. His brown fur, matted by burgundy blood, covered his face and body. Drops of blood fell from the corners of his mouth and collected on his massive, heaving chest.

Despite every ounce of common sense screaming at Mike to run, he stood with his feet firmly planted, staring at the evil face.

The spotlight grew weaker and disappeared. So did the local legend. Mike pulled out his flashlight and pointed it at the area where the beast had been standing just a few seconds before.

Mike's pituitary gland kicked into action and sent a huge rush of endorphins snaking through his body. They helped clear his scrambled head, and he chose the most sensible option given the tense situation.

He turned and ran in an unknown direction. As he hurtled through the woods, he ripped the last can of Milwaukee's Best from his hip and wielded it like a weapon, despite the fact that he looked utterly ridiculous.

A compact ball of blue and orange flames streaked in front of Mike's face. He spun around several times until he became dizzy and dropped to his knees. Immediately, he sprang to his feet and started struggling through the dense woods. He scurried away from the direction the fireball had come from.

Another flaming object sailed directly at his head before suddenly veering upward and flying over his left shoulder. The intense fireball exploded against a huge oak tree, immediately igniting the wide trunk and blackening the bark.

Mike fell again and scratched desperately at mother earth with his empty hand to get back to his feet. He stumbled to get fully upright as a strange sensation attacked his chest. The inside of his chest. Mike felt an alien hand flatten out and slide through a gap in his ribcage. It opened like a claw and clamped down. Four powerful fingers and a thumb grabbed hold of his heart.

His mind and eyes were getting heavy, and he fell flat on his face. The killer grip tightened, and Mike sensed his life was fading away. He curled up in a ball.

I'm sorry, Mom. I thought I could get him for you, but I failed. Again. I failed like I always do. Sorry for being such an embarrassment. I'm sorry I let you down. I guess it's all over now.

A heavy hand slapped Mike's shoulder and violently lifted him back to his feet. He assumed George had arrived to claim his prize. Mike wanted to be defiant and stare death in the face.

He opened his eyes, and to his great surprise, he saw Kyle.

"Dude, I am so lost right now. I thought you were fucking dead there, too. Did you ever find Gary?"

"No. I found someone else. Let's get out of here." Mike cracked open his last beer, and foam exploded everywhere. He chugged the warm lager and threw the can down. "Hold up, Kyle. This way." Mike pointed to the right.

Kyle searched his pockets for his keys. "What happened back there?"

Mike didn't want to answer the question. He shook his head and closed his eyes, trying to mentally scrub the ugly memories. Kyle turned the ignition, and a slow, stubborn rumble finally started to rev into life. A cascade of relief washed over Mike. He opened his eyes and looked in the side view mirror.