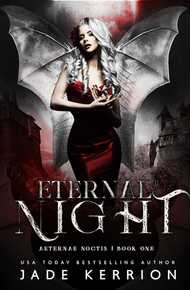 Her debut science fiction novel, PERFECTION UNLEASHED, won six literary awards and launched the DOUBLE HELIX series which blends cutting-edge genetic engineering and high-octane action with an unforgettable romance between an alpha empath and an assassin.

The DAUGHTER OF AIR and LORD OF THE OCEAN series, launching in 2019 with CURSED TIDES, blends fairy tales and mythology into urban fantasy. It's the story you always wanted to read: The Little Mermaid finally kicks ass!

Jade's devious plan for world domination begins with making all her readers as sleep-deprived as she is.

Demonic overlords command vampire armies, but they are not the ones to fear…

For a thousand years, humans cowered beneath the rule of the Night Terrors, but Jaden's five-year-old sister is prophesied to stop them…if they don't get to her first.

To protect her, Jaden leads a rebellion against the Night Terrors, but when he is captured in battle and dragged before the demonic queen Ashra, he realizes that he has seen her face before…every night in his dreams.

Ashra is fighting her own battle for survival against enemies without and treachery within. But when Jaden stumbles upon Ashra's darkest secret and uncovers the truth about the city of eternal night, he realizes that nothing may be what it seems…including himself.

"…A stunningly original take on post-apocalyptic science fiction and fantasy!"

Moonlight bathed the empty city square, drenching the surrounding stone buildings in a pale glow. The night of the full moon was the domain of the vampires and icrathari. The humans barricaded themselves in their homes and huddled in prayer.

Alone in the city square, Ashra shook her head, the gesture sad and slow.

Centuries prior, in the early years of Aeternae Noctis, she might have chuckled with ironic humor at the humans' superstitions. The humor, however, had long since vanished, and conviction had faded into grudging duty. If not for their personal loyalty to her, would Tera, Siri, and Elsker have honored Rohkeus's vision for Aeternae Noctis? Ashra did not think so. It's left to me to do what he would have wanted even if there is no joy left in the damnable responsibility I've taken on.

She gazed up at the moon, as eternal and unshakeable as her duty, and wandered through the surrounding fields and forests. Her slender fingers traced the tall and narrow columns interspersed among the crops and trees. The columns shone with radiant light in twelve-hour intervals, mimicking the sun. In Aeternae Noctis, the city of eternal night, the crops thrived beneath the artificial sun; the humans, however, were less resigned to their fate.

The humans had never learned to be content. They never stopped hoping, and why should they? Outside the glass dome, the Earth seemed verdant with beauty, lush with life.

If only it were real. Ashra sighed.

Pale-skinned vampires moved past her, going about their assignments with silent and efficient grace. The vampires' time in the city was limited; human paranoia and fear would not permit more contact. The impact of the vampires' handiwork, however, would last far beyond those few hours in the city. The philosopher's library was ransacked, his precious books burned. The scientist's hidden laboratory, tucked into a dingy cellar, was destroyed, his experiments smashed. With the seeming randomness of pure chance, some five-year-old children were stolen from their parents while others were ignored. The vampires also took ten men and women in their prime.

Broken-hearted, the people of Aeternae Noctis wept over their loss.

To Ashra, their sobs were white noise, blending with other nocturnal melodies.

The air trembled around her as large wings bore another icrathari down to a silent landing beside her.

She tilted her head to the side. "What is it, Tera?"

The leather-clad icrathari looked bemused. Her long braid hung over a shoulder, the tip skimming her waist. "We have a problem. We lost two vampires."

Ashra arched a delicate eyebrow. "To the humans?"

"Fascinating." Unconcerned, Ashra stepped out of her sandals and dipped a toe into the waters of Lake Spiritus that surrounded the base of Malum Turris. "Was he one of the Chosen?"

"No, we didn't miscalculate. The human would have been among the Chosen months ago if he had not been excluded because of your prior agreement with Dana."

"Dana?" The lake rippled as Ashra stepped into it, her flowing white gown trailing through the water. The icy-cold liquid teased a scarcely perceptible caress against her skin. It was a pity that only extreme sensations registered against her hardened immortal body. She sighed, a soft sound. Dana, the female vampire who led the scout teams, would be heartbroken, but agreements could only be honored up to a point. Fortunately, the tedious explanations could wait since Dana was out on a scouting mission. "You know what you have to do."

"I sent him to Malum Turris to await your judgment."

"Why are you dragging out this mundane, administrative issue?" Irritation edged into Ashra's voice. "Turn him into a vampire."

Tera snorted. "It's not that simple, Ashra. Trust me; you'll want to see him."

"This had better not be a waste of my time." Ashra raised her face to the night sky, closed her eyes, and drew a deep breath. A breeze, infused with the aroma of night-blooming flowers, wafted from Malum Turris and swept through a silent city filled with cringing humans. The sweet fragrance, like the crystal-clear waters of Lake Spiritus, came from the tower the humans called Malum Turris—the evil tower. If only they knew…

Fools. The word was laced with contempt and underscored by weariness.

Ashra arched her back. The black leather wings unfurled, and then beat down, lifting the immortal icrathari into the air. Water droplets trailed from her wet gown as she soared toward Malum Turris, Tera beside her.

The black tower was more than the centerpiece of Aeternae Noctis. Malum Turris anchored the palladium-glass dome that enclosed the city. Heralded by the whisper of gliding wings, Ashra landed on the balcony that encircled the highest floor of the tower. Her wings folded against her back, the gold-plated horned tips—a symbol of her ruling status—rising a foot above her diminutive five feet. Her footsteps made scarcely a sound as she walked into a massive circular room known only as the chamber.

The chamber was not a throne room, but the administrative center of Aeternae Noctis. The black walls were unadorned, the metallic floor bare. Florescent lights emanated from clear panels set in the ceiling, and a thick cylinder of palladium glass, specially engineered to be permeable to gases, connected the apex of the dome to the foundation of Aeternae Noctis. In spite of its deceptively fragile appearance, palladium glass was stronger than steel. The cylinder was the city's lifeline, filtering and transfusing the air drawn in from the altered atmosphere outside the dome.

With Tera beside her, Ashra strode forward. A wall of vampires parted to reveal the other two icrathari, Siri and Elsker. A dark-haired human slumped at Elsker's feet, his wrists cuffed behind his back. Ashra stifled a chuckle. Surely Tera was overreacting; the human was by far the weakest creature in the chamber.

Tera knelt down, wrapped her fingers into the human's hair, and pulled his head back. The human's face was handsome enough—the slash of his cheekbones accentuated his perfectly proportioned, sculptured features—but taken as a whole, he was not compelling enough to justify the fuss.

Apparently undeterred, the icrathari warlord shook the human hard. His eyes flashed open. They were brilliant green, the exact color of the emerald ring Ashra wore on the index finger of her right hand. His gaze was unfocused, and the reflexive narrowing of his eyes matched the clenching of his jaw, hinting of wrenching pain.

Tera looked up and met Ashra's gaze. "Taste his soul."

Ashra recoiled, her upper lip curling in disgust. She had no desire to taste a human's soul. Over the centuries, humans had grown weak, their small lives consumed by superstition and fear. It was better to live on the edge of perpetual starvation than fill her hunger with the pitiful excuse humans called a soul.

But why? Ashra's brow furrowed. She glanced at Siri and Elsker, but the two icrathari shrugged, apparently no more clued in than she was. She looked back at Tera. The icrathari warlord known as Ashra's Blade was the epitome of calm understatement. If she was so insistent, she must have had a reason.

Ashra knelt beside the human. Without flinching, she placed her hand against his muscled abdomen. It was bloody, his flesh ripped by a vampire's talons.

The man tensed at her touch, and his eyes flared wide with agony when her soul-sucking powers leeched into him. His breath came hard and fast, his chest heaving with the effort as he twisted in Tera's unyielding grip, trying to break free.

Ashra's eyes narrowed. The human was weakened—tapped into his life source, she waded through his dazed thoughts and shivered from the echo of each spasm of pain that wracked his body—but still, he fought Tera on the physical plane and Ashra on the psychic dimension, denying her access to his memories and to his soul.

She frowned and slammed her will against his, tearing an anguished scream from his throat, but still, his will did not crumble.

Askance, Ashra looked at Tera. "Did you taste him?"

Tera nodded. "It wasn't hard the first time; he didn't know what to expect, but apparently, he does now and is doing a fine job of fighting back."

Was that grudging respect she heard in Tera's voice? "Does his soul really matter?"

Ashra's shoulders shifted with the motion of a silent sigh. His resistance left her with little choice. She leaned forward and glided her lips over his in a whisper of a kiss.

Human myths spoke of succubi and incubi—demons that, with a touch, could stir lust in their unwilling victims. All myths were based in reality. The maddening beauty and soul-sucking powers of the icrathari had spawned the legends of succubi and incubi. With a touch, the icrathari could lure their victims into a state of sexual ecstasy, bending the will and baring the soul.

The human tensed against Ashra, resisting the intimate contact. She almost recoiled. Had the centuries dulled her innate powers? Surely she had not forgotten how to lure a man.

She closed her eyes and remembered love.

As always, Rohkeus's fine-featured face—those beautiful gold-flecked green eyes, so unusual for an icrathari, and teasing smile—came to the fore. With a dreamy half-smile, she deepened the kiss, driving the memory of love before her like a sharpened stake.

At last, the man relaxed, succumbing to the kiss. She leaned into him, heedless of his crimson blood staining her white gown. He was warm, feverish even. Just skimming over six feet, he had more than twelve inches on her, but his physical strength, compared to hers, was puny. She was well aged; over four millennia old, she was the oldest of the icrathari and the strongest. She could have broken his neck with as little effort as a human child snapping a twig.

Her hand trailed across his muscled torso. He made it easy for her to be gentle. His body trembled as if he longed for her. His mouth was hungry for her kiss. He arched up against her, as if craving more. His need was like a living creature, wild and aching for her touch.

Eyes closed, Ashra shivered. Only one other person had desired her as much.

And he was dead.