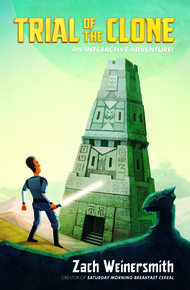 Trial of the Clone by Zach Weinersmith

Trial of the Clone is a choosable pathway gamebook that allows the reader to make choices, interact with the world, and otherwise navigate through over 500 scenes and thousands of potential pathways. Readers can choose to simply read through the story or interact more fully with the book's game by keeping track of statistics, items, and battles. Readers are incentivized to reread the book many times to explore other pathways or to catch some of the many secrets the author has hidden throughout the book.

The reader plays as a clone who sets out to find his place in the world, solving challenging puzzles and fighting monsters along the way. Weinersmith's writing is characteristically irreverent and satirical, painting a dystopian future world filled with comical, colorful characters and clever surprises. Trial of the Clone is Zach Weinersmith's first full-length book, and is evident of his sprawling understanding of literature, science, logic, philosophy, and technology. Weinersmith is the sole creator behind Saturday Morning Breakfast Cereal, a daily comic that boasts over 250,000 daily readers and served more than 500,000,000 comics in 2011.

This book is published by Breadpig, whose publisher profits will be donated to Fight for the Future.

It’s not just a hilarious science fiction novel, it’s a booksperience! Welcome to the next level of choosing your own adventures. – Geoffrey Golden, The Devastator

You are zero years old, suspended in a warm, moist sac. You’ve been sitting here happy and stupid for, if your marks on the wall are correct, approximately 9 months.

Behind you, a slit of unbearable brightness appears and draws your gaze. You want to turn away, but an overwhelming sense of purpose and meaningfulness propels you to this mystical opening. In a triumphant burst, you leap headlong into the light.

You find yourself in the waiting arms of a physician. Instinctively, you whirl around, knowing that behind you is someone who will love you unconditionally as long as you live.

Sixteen years later, it is your birthday.

Your entire life has been spent in the confines of a small space-orphanage near Ritni Otvor IV. In the early 28th century, philanthropy became fashionable among the wealthy, and there was a shortage of orphans to adopt. Hence, your existence. By the time you were synthetically gestated, the wealthy had moved on to fighting for access to healthcare for wiener dogs. Hence, your sad existence.

Despite being the only child in the orphanage during your cutest years, you were passed over time and time again. Some cited your hair, others your physique, others your conversation. However, when exit surveys were filled out, by far the most common sentiment was simply “Meh.”

Now that you are 16, you are legally unadoptable. Father Nadezda fills out some forms, notes that you are “now unadoptable for 2 reasons,” and grimaces at your eyebrows. As you reflexively cover them, he explains that you will be sent to the Silene Monastery at Skubnuti Prime. He hands you a strange golden note, which you are not to open.