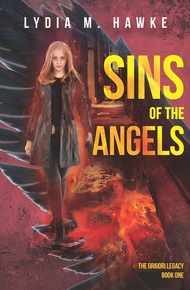 Lydia M. Hawke is a writer possessed of both a light side and a dark one. On the dark side, she's the author of the Grigori Legacy, an apocalyptic urban fantasy series featuring a hard-as-nails cop caught up in the war between Heaven and Hell. In her lighter moments, she writes romances (contemporary and suspense) as Linda Poitevin. And when she's not plotting the world's downfall or next great love story, she's a wife, mom, friend, coffee snob, gardener, walker of a Giant Dog, keeper of many pets, and an avid food preserver (you know, just in case that whole Zombie Apocalypse thing really happens).

Sins of the Angels - The Grigori Legacy Book One by Lydia M. Hawke

A hard-as-nails cop... Homicide detective Alexandra Jarvis is up against a serial killer unlike any she's ever encountered. She has neither time nor patience for the arrogant new partner assigned to her in the middle of the case, but he seems hellbent on getting in her way—and under her skin—at every turn.

An undercover hunter... A millennium ago, Aramael sentenced his own brother to eternal exile. Now the fallen angel is back and wreaking murderous havoc in the mortal realm, and it's up to Aramael to stop him—and to keep the stubborn human police officer out of his path.

A world made to pay for the sins of the angels... With tensions flaring between them and Alex's uncanny ability to see him for who he really is, Aramael's mission and his soul are both in serious danger. Can he and Alex work together to capture the fallen one? Or will Aramael end up committing a sin more unspeakable than that of his brother?

There could be no turning back.

Caim stared down at the destruction he'd wrought and held back a shudder. They would come after him, of course, as they had the first time. They couldn't allow him to succeed. Couldn't risk him finding a way back and opening a door to the others. They would send someone to hunt him, try to imprison him in that place again.

His breath snared in his chest and for a moment the awfulness of the idea made him quail inside, made his mind go blank. An eternity of mind-hollowing emptiness, of nothingness. His belly clenched at the thought. That he had escaped at all was a miracle. Whatever happened, he couldn't go back. He could never go back.

He curled his hands into fists at his sides and made himself focus on now, not then. Not what if. Because he could do this. He could do what the other, his visitor, had told him was possible. He could find the right one who would open the door to where he belonged, who would let him go home again. It was just a matter of time.

A matter of numbers.

Caim looked again at the corpse by his feet. But he would have to be more careful if he wanted to succeed. This one had been…messy. He crouched and touched a withered fingertip to the crimson that welled from the gash in the mortal's chest. He rubbed the viscous fluid between thumb and forefinger and studied his work, displeased at the lack of control he saw there. The haste.

He scowled at the frisson of remembered, wanton pleasure that even now edged down his spine, making his heart miss a beat. Fucking Heaven, he disliked that side of himself, the part that thrilled at the destruction. He had never wanted this, had tried so hard not to give in to what she had claimed to see. He wished he'd had another choice; that she'd given him another choice.

But whether he was here by choice or not, he would do well to maintain better control. If one of her hunters had been near just now, his search would have been over before it began. He'd been so caught up in his task, he wouldn't have felt an approach until it was too late.

No, to stay ahead of her, ahead of the hunter she sent for him, he needed to rein himself in, to contain the bloodlust that clouded his mind. To be disciplined. Caim lifted his head and breathed in the alley musk, scented with rain and death. He needed to be faster, too. Finding one of the few he could use among the billions that existed now—the task seemed nothing short of monumental.

He wiped bloody claws on the corpse's clothing, and then, on impulse, reached over and spread the corpse's arms straight out, perpendicular to the body, and crossed the ankles over one another.

Pushing to his feet, he surveyed his handiwork with twisted satisfaction. Perfect. Even if she never saw it herself, she would know of his contempt, know what he thought of the esteem in which her children still held her.

He drew a breath deep into his lungs and stretched his wings over his head, letting his body fill out again, taking on flesh and warmth. He reveled in the fierce pleasure of his own aliveness. The pull of wet cotton against his skin; the remains of the summer rain dripping from his hair; the thick, sullen night air, unrelieved by the storm that had proclaimed his return. The sheer gratification of feeling. He cast a last, dispassionate glance at the remains on the pavement, folded his wings against his back, and started down the alley toward the street. His mind moved beyond the kill to other matters such as finding a place to stay. Somewhere he could hide, where a hunter wouldn't think to look for him.

Caim emerged from the alley onto the sidewalk and looked up the deserted pavement to his left, then his right. Somewhere—

He paused, staring across the street. He grinned. Then he laughed.