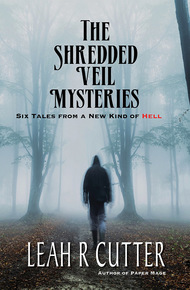 December 21st, 2012. The world changed, like the ancients always warned. The veils between the Seen and Unseen worlds shredded.

Ghosts, spirits, and other creatures now could interact with the living.

Andy worked as a detective in Vice when he'd been alive. Now, as a ghost, he works as a private investigator.

Come explore the mysteries of Heaven and Hell, of cameras with souls, and thieves with hearts.

Includes the novellas "Hell By Any Other Name," "To Hell And Back," "Hell For The Holidays," "High Stakes Hell," "Postcards From Hell," and one last story from Toni's point of view, "Of Heaven and Hell."

I woke up from my nightmare sitting straight up in bed.

I'd been dreaming of Hell, of course.

Most ghosts, if they admit to sleeping, dream of Hell. It was why we were ghosts. That door to the Beyond wasn't full of pearly gates and choirs of angels. No, it was fire, heat, and chaos.

There were a few ghosts who stayed on Earth even though they were promised Heaven. They were all nuts.

I pressed my hands against my eyes, as if I could shut the images out and wipe them away. No luck. I groaned. Quietly. I didn't want any more complaints from Mrs. H— downstairs about unearthly noises.

I was lucky enough to be able to rent a place outside Ghosttown, to live among the living. Even if it was little more than a glorified closet, with only a skinny, single bed and two stacks of crates holding a door across them that served as my desk. Dark water stains marred the formerly white walls, while mysterious lines crossed the ceiling, shadows of discontent.

The only bright spot was Betsy, my camera, sitting in her corner of the desk. Most of what a ghost sees is muted, grayed, behind the veil still. Betsy always appeared red and glowing, as if a warm heart beat behind her dark lens.

That was all my room contained—one of the advantages of being a ghost. No need to cook or use a bathroom. You couldn't really change your appearance, and since you didn't actually have a body, well, nothing in, nothing out. We still needed rest, though. The brain needed time off to process.

I looked at the clock. Two in the afternoon. I caught myself before I groaned again. Flames of Hell still licked behind my eyes if I closed them. There would be no more sleep for me that day, though I didn't usually rise until sunset.

I slid aside the heavy drape covering the window, exposing an inch of daylight. I was in luck. Another rainy Seattle day greeted me. I decided to go to Volunteer Park. Might even go to Lakewood Cemetery. Not because I wanted to greet the newly dead; there was a committee for that. Or even to look at the portals, to see if they'd changed. I didn't believe those myths, that I might somehow do enough good that I'd earn Heaven.

No, it was merely a matter of wanting some company of my own kind. I hated to admit it, but sometimes I got lonely. I rose and walked out into the gray haze of the day, the rain sliding through me as if I wasn't really there.

I tried to think of it as a cleansing, inside and out, but I never really feel clean.

December 21, 2012 hadn't been the end of the world, only the Great Unraveling. The veils between the Seen and Unseen worlds shredded.

Luckily for our side, we had a lot of lawyers. The Interspecies Act passed relatively quickly for Congress, guaranteeing the rights of the dead and others.

Of course, law and practice were often worlds apart. Seattle had one of the stronger lobbies, though. I praised their work again as I got on the bus, the new card system beeping when I passed my hand over it, automatically deducting my fare. I'd hated walking everywhere before.

The bus was mostly empty. A homeless man slumped on a seat next to the back door, arms wrapped firmly around his pack; two students sat next to each other madly texting, probably to each other; and a professionally dressed man with round glasses and a briefcase on his lap sat stiffly in his seat. He stared straight ahead, his face frozen.

As if he'd seen a ghost.

I almost sat next to him, but I'm not generally that vengeful. It's part of what ghosts do, though: scare the living, whether we mean to or not. The ghosts who get off on it were also the ones who, as kids, pulled the wings off flies, and as adults fired people for a living, know what I mean?

Instead, I swayed as the bus turned another corner, making my way to the very last seats in the back, looking out the window and watching the gray day slide by. I could have gone out in the sunshine. Sometimes I enjoyed seeing the world brightly lit, even though it didn't seem as vivid as when I'd been alive. I missed the feeling of warmth, though. And intense sunlight made ghosts less substantial. People no longer saw me. Instead of trying to avoid me, they stepped through me. There was no feeling more wrenching than your former intestines momentarily misplaced.

The man with the briefcase got off at the same stop I did. I didn't think anything of it, since he walked straight ahead when I turned left, into the park. I walked up the winding hill, sticking to the sidewalk, not wanting to take a chance on slipping on the wet grass. Red, orange and yellow leaves lay scattered across the green lawn. I remembered, when I was still alive, how colorful the fall leaves were, how a gray day made them seem more vivid. Dying cast a fog on everything. Nothing was as clear as it used to be. The edges weren't as crisp; the colors, more muted.

I looked through the black donut sculpture at downtown and the Space Needle, and then walked around the reservoir—I'd been alive when it had still been full of water, one of the last open reservoirs in all of Washington. Now it was just a thin pond full of fat koi, algae and bird droppings. Finally, I decided to head north to the cemetery. Walking along the avenue of beechnut trees I saw the man from the bus again. This time he stared straight at me. The hand holding his briefcase was clenched tightly, almost white. With a determined stride, he drew closer. "Andrew Collin?"

My mouth must have been gaping because I closed it with a snap. "I only work during business hours," I told him sharply.

"If you know my name you already know the address of my office."

I turned on my heel and deliberately walked through the nearest tree.

Of course, I appeared on the far side of it. While it was unpleasant for me, I've been told it was distinctly unsettling for the living.

I walked without pause to the cemetery. Only paid professionals among the living ever went there anymore. New memorial parks had sprung up, where the living could go to honor their dead. As a result, cemeteries were one of the safest places on earth. I'd heard stories of more than one attempted robbery or rape ending when the victim fled to a graveyard.

Ghosts could be very vengeful.

Most people avoided graveyards, though, because of the portals, the doors to Heaven or Hell that surround the places of the dead.

The living saw them differently, as shadows, or else they felt them when they walked too close, a chill that went through bones and into the soul. The doors weren't meant for them. Some got glimpses, though, of their afterlife, whether it was angels or seventy-eight virgins or a blessed nothing. The living couldn't pass through. Whatever they saw was disturbing enough they rarely ventured near.

One of the good things about the portals showing up was that all the mass graves were suddenly findable, even in the middle of the jungle. Murderers now had to be very careful where they stashed a body. Portals stuck around even after a soul went through.

Like all ghosts, I found myself drawn to them frequently. We were meant to go through. But some could ignore the siren's call better than others.

Flamed licked out of the nearest portal, drawing my attention. A black, churning cloud boiled beyond the burning edges. The only time I felt heat was near that fire. There wasn't a smell of sulfur, or cries of the damned. Just fire I knew would burn my ectoplasmic flesh, and a chasm that would chew up my soul until there was nothing left.

In an abstract manner I admired the contrast between the comforting trees of the park, the dramatic gray of the clouds, and the shooting flames dancing in the portal. I took another step forward, then another, fascinated against my will.

Maybe if I stared long enough, a pattern would form. Maybe I could find a path through the darkness into the light.

Maybe if I wished hard enough, I, too, could grow wings and fly.

I stopped myself in time, before I stepped through, as I always did.

That Hell was not for me.