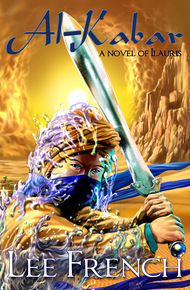 Lee French lives in Olympia, WA with two kids, two bicycles, and too much stuff. She writes across a variety of F/SF subgenres, including epic fantasy, space opera, and cyberpunk. An active member of SFWA, she is best known for her young adult urban fantasy series, Spirit Knights. Her stories appear in numerous anthologies, including the award-winning Merely This and Nothing More: Poe Goes Punk. Her work can be found online at www.authorleefrench.com.

Without a Sultan, corrupt Fire Dancers and their pompous Caliphs abuse power and wage fruitless wars across the parched sands of Serescine.

Fakhira wishes her family could afford to solve their problems with magic. Sometimes, wishes come true. In the worst possible way. A simple peasant, she'll have to find the strength to survive and shoulder her fate before the desert is bathed in the blood of innocents.

The Fires blaze in dozens of wild, capricious Dancers. The Waters anoint only one champion, one Al-Kabar to serve—and save—the people of the desert.

Lee French's Al-Kabar is a rollicking adventure fantasy set in a richly imagined world inspired by medieval Arabia. Fakhira must like the phoenix rise from the ashes of her village and learn to harness the powers bequeathed to her by the mysterious Waters. Action and romance in a unique desert setting! – Terry Mixon, SFWA

"I think we got someone looking for trouble here." A large, burly man stepped into her path.

She glanced to the side and found two more men watching her. Her first thought told her to duck her head, back up, and seek safety through one of the doors. That's what Fakhira would do. Her eyes did drop to the ground, then she clenched a fist and put the other hand on the hilt of her sword. "No, that's not what I'm looking for."

"No? I've seen you walking through here this afternoon, your face covered up. You got something to hide?"

Fakhira stifled a gulp and shook her head. "Not used to the smell."

The leader chuckled, deep and dark enough to remind her of Trimar's men. "Boys, we got a foreigner here. He doesn't think much of our city."

Behind her, the other two closed in. One cracked his knuckles. The other produced a thick stick and patted his hand with it.

She didn't know what to say or do. The Waters hadn't taught her anything about fighting three men at once, and she suspected using her sword on these men would get her into serious trouble. It might even land her in jail, which would foil her plan to join the army. Hoping to ward them off by escalating the situation, she pulled the sword out of her belt. "I have no interest in fighting you."

The leader's eyes narrowed and he took half a step back. His arms spread in preparation to fight her, not in conciliation. "That'll make this a lot easier."

The one with the stick swiped it at her. She ducked into the knee of the leader. The third man drove his elbow down into her side. They moved in concert, used to fighting together, and she couldn't watch them all at once. Her wraps offered one small blessing by lessening the blows somewhat. It mattered little, as the leader stepped on the back of her leg, forcing her down to one knee. The stick went up to come down on her head. In a stroke of what felt like luck, she raised her sword in time to catch it.

Throwing herself back against the nearby wall, she squawked in surprise when she fell through the cleft that hadn't looked big enough to swallow a person. It dropped her down into a small, dark room, where she landed on packed earth with a groan. Above her, she heard the men grunt in irritation, kick and whack the wall, then stop.

Not sure if she'd had a stroke of luck or fallen into a worse place, she took a deep breath and summoned light to her hand. This small amount of water could be carried with her, she suddenly knew, but if she wanted to use more, she needed a source to draw it from.

Perhaps this explained why the Waters rarely had a champion. Few would be pleased to have these magical powers with such a harsh limitation.

The blue light showed her filth. Muck and rags had been packed into the corners of the small chamber, everywhere except in one corner. A jagged rip in the wall showed her another chamber beyond it.

"Who's there?" The male voice sounded older than a child, but still fearful and timid. "The curse of a thousand ants in your nose if you try to hurt me!"