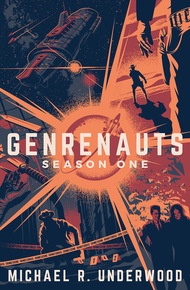 Michael R. Underwood is an author, podcaster, and publishing professional. His works include the Ree ReyesGeekomancybooks, the r/Fantasy Stabby Award-finalistGenrenautsseries, Born to the Blade, and Annihilation Aria. He's been a bookseller, sales representative, and was the North American Sales & Marketing Manager for Angry Robot Books.

Mike is a co-host of actual play podcast Speculate! and a guest host on the Hugo Award-finalist The Skiffy and Fanty Show. Mike lives in Baltimore with his wife, their dog, and an ever-growing library. He loves geeking out with games and making pizzas from scratch.

Michael R. Underwood is a Hugo Award Finalist as part of the cast of The Skiffy and Fanty Show and his Genrenauts series was a r/Fantasy Stabby Award-finalist for Best Serialized Fiction.

Genrenauts - The Complete Season One by Michael R. Underwood

Struggling stand-up comic Leah Tang is offered a once-in-a-lifetime chance to join the Genrenauts, a secret organization of dimensional travelers. Leah learns that our world is just one of many, and every other world is the home of a story genre — Fantasy, Science Fiction, Romance, Western, and more — each populated with archetypal characters and constantly playing out familiar stories.

The Genrenauts' mission: find and fix broken stories across the multiverse. If they fail, the ripples from the story worlds will cause havoc and devastation on their home world. Leah joins the team and dives head-first into the adventure, fighting bandits in the Wild West, re-uniting estranged lovers in the world of Rom-Coms, and more.

But the stories are breaking faster and worse than ever before. Will Leah rise to the occasion, or will she end up as just another broken story?

Genrenauts is a tough book to classify. Its heroes don't simply exist within a story, they travel into stories! Trouble is they have to edit them from the inside while dodging bullets figurative (romance world) or real (hello scifi world). Strap in for a meta adventure to save the Tropes! – Terry Mixon, SFWA

Mallery York pressed her back against the outer wall of the saloon while bullets flew on Main Street. Her breath came fast as her hand fumbled, ripping the hem of her skirt and tying another bargain-basement tourniquet around her right arm. It'd keep the bleeding down, but she'd taken three hits, and addressing them all would transform her outfit from "Western" to "Jane of the Jungle."

The report of gunshots came around the corner, impacts sending splinters of wood flying in the dusty street. Mallery flinched at each one, every hit refreshing the sharp pain from only moments ago. She'd gotten lucky, in that "not all bullet wounds are created equal" kind of way. But no matter what, the mission had gone down the latrine and it was time to bug out.

Mallery dug into her petticoats for the polished chrome and Gonzo Glass phone. Doubling over to make herself a smaller target, she pressed the big red button, shielding the phone from view. Even with bullets flying, she kept to the concealment protocol, just as regs demanded.

The call picked up on the second ring.

"This is King. What's your status?"

"Floundering in a sea of gunfire and dust."

"Just hold on," King said. The voice of her boss and mentor was a life preserver. She grabbed it and held on for dear life.

"The showdown was a bloodbath. Our White Hats are down to the last man, and I saw him turn tail and run a minute ago. The bandits are going to finish off the wounded in a minute, and I need immediate evac."

Someone moved on the other end of the line, set to speakerphone. Probably Preeti rolling over to another station. "What happened?" King asked. "You said you had the posse assembled, they had their bonding scene around the card table and everything."

"Tell that to the three dead deputies in the street, boss. What's my ETA on an extraction?"

Low chatter between Preeti and King. Then, "Roman will be there in ten minutes. Can the story be salvaged?"

Mallery risked a look out into the street, concealing the phone beneath her sweat-and-dust-stained hair. The bandits were tying bags from the bank to their saddlebags, but the gunfire had calmed down.

"Not today. We'll need to assemble another posse."

"Understood. Stay out of harm's way, and Roman will be at your location in fifteen."

Mallery winced. "I thought it was ten?"

"Dimensional disturbance. Preeti has plotted a new course, but it's going to delay the crossing."

"Well, I'll just hang out here and bleed some more, then. No big problem."

"Try to keep that to a minimum," King said.

"Preeti will stay on the line with you until Roman arrives. Be careful, Mallery. King out."

"Careful isn't going to stop the bleeding," Mallery said, watching her skirt go red. Next time she came to Western-land, she was wearing the chaps. They were at least something resembling armor. Though they couldn't be turned into bandages nearly as easy. You give a little, you get a little.

"Roman is on his way. We've got your location locked, so just sit tight," Preeti said.

"You know, this is why I prefer Romance world. At least there I'd be having mortal-danger makeouts while under fire."

"I'll put in the request on your duty roster. More mortal-danger makeouts."

Preeti stayed on the line, trying to engage Mallery with small talk, keeping her bleeding friend focused when the world started to go black. Mallery leaned into the conversation, shutting her eyes and focusing on Preeti's story about spending all Saturday digging through the source text archives to find her favorite childhood storybook.

Mallery ducked her head out to check on the bandits. The Williamson gang had finished loading up and was riding for the hills with half of the town's silver. "When I get back, I am so kicking someone's ass."

Another impact hit mere feet from her head. She ducked and said through clenched teeth, "This is not how the story was supposed to end."