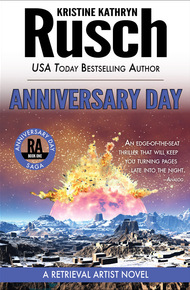 Four years ago, a bomb destroyed part of the dome protecting Armstrong, the largest city on the Moon. Now, as the city celebrates its survival with an event it calls Anniversary Day, a larger threat looms—one that begins with the murder of the mayor, and spreads across the Moon itself.

Even with every new technological device at her disposal, Moon Security Chief Noelle DeRicci can't stay ahead of the unfolding disaster. As the situation gets worse, Retrieval Artist Miles Flint hurries to his daughter's school to protect her. And Detective Bartholomew Nyquist finds himself in the middle of everything, from that first bombing to the Anniversary Day crisis itself.

A thriller with several mysteries at its core, Anniversary Day marks the beginning of a saga—a multibook series that will change everything on the Moon and in the Earth Alliance.

Kristine Kathryn Rusch is more prolific than you realize, since she writes in many different genres and under many different names. I’ve known her since we met in a creative writing class in college. Her “Retrieval Artist” series is one of her most popular and ambitious universes; Anniversary Day is a good place to jump in. – Kevin J. Anderson

Fifth political fundraiser of the week and it was only Wednesday. It was also Anniversary Day, a day Mayor Arek Soseki hated.

Of course, he couldn’t let anyone know he hated Anniversary Day. On Anniversary Day, everyone got together to celebrate the fact that the City of Armstrong had survived a bomb large enough to destroy a section of the Dome.

The Dome had worked properly—it immediately isolated the section, leaving that part of the Dome exposed to the vacuum that surrounded the Moon, while the rest of the Dome managed to survive.

Damaged, but it survived.

Soseki dwelt on the survival when he gave his Anniversary Day speeches. The strength of Armstrong, the quick response of the authorities, the resiliency of its people. He had given these speeches for three years now, and he could recite them in his sleep.

He practically was asleep. He stood in front of the podium in the backroom of O’Malley’s Diner. O’Malley’s wasn’t a diner and its owner was not named O’Malley. O’Malley’s Diner was one of the more upscale restaurants near the port, and its location, rather than its food, had made it a place for politicians to hold quick and dirty fundraisers. Easy access, not to mention some rather hidden back routes from the Port itself, kept some of the fundraisers secret—or at least, some of the attendees.

Soseki had lost count of how many times he’d given a speech here. He almost felt like he should carve his initials into the real wood podium. The entire backroom was paneled in real wood of a type he wasn’t familiar with. Not that the Mayor of Armstrong needed to be familiar with wood. Wood was one of those things the rich indulged in that Soseki didn’t understand.

He scanned the crowd. Two hundred super donors. Of the two hundred men and women in front of him, only about twenty represented their own interests. The rest belonged to some corporation or another, here for the express purpose of dumping funds into Armstrong’s city council elections through legal means.

Fortunately it was election season because that made his Anniversary Day speech just a little more interesting—at least to him. He had to combine two canned speeches into one.

Not that he was so fond of election season any longer. something he never thought he’d admit to anyone, particularly himself. He used to love running for office, the glad-handing, talking to the voters. Hell, he even liked manipulating the media while they manipulated him right back.

But he’d been mayor for six years now, and it looked the job was his for life if he wanted it, thanks to the political machine he’d installed throughout Armstrong. That meant elections weren’t that much of a challenge any more. Even the fundraisers had become pro forma—the mayor shows up, the mayor asks for money, people donate money, the mayor passes the money to the proper candidate, and the proper candidate wins. End of story.

He used to love the challenge of politics, but politics would not be a challenge again unless he ran for Governor-General of the Moon—and that particular title held less actual power than his position did. He could have more of an impact as Mayor of Armstrong on everything from Moon politics to Earth Alliance regulations because he controlled the largest port on the Moon, not to mention the largest city here, the most cosmopolitan city outside of Earth.

Eventually, everyone came through Armstrong—usually on their way somewhere else, but they came through. And stopped. And spent money. And got a little taste of the city.

And the first thing they saw when they left the arrival terminal in the port? A floating sign with his image, saying that Mayor Arek Soseki welcomed them.

And he hoped they didn’t remember that he had been mayor during the bombing. He saw Anniversary Day as the anniversary of the greatest failure in his career. To date, no one had caught the bomber.

The Chief of Security for the Moon, Noelle DeRicci, thought that a suicide bomber set off that bomb. Even if DeRicci, who had gotten her job as a result of her performance during and after that bombing, was right, it made no difference. While the officials of the City of Armstrong thought they knew who was behind the bombing, they weren’t certain.

And certainty mattered, particularly in cases of terrorist attacks.

Soseki shook off the thought, made himself focus on the crowd, which watched him with rapt attention. How could they be interested when he didn’t give a damn? He had become very good at faking enthusiasm, which also disturbed him. A part of him was still idealistic enough to believe that he should care about all aspects of his job, even the distasteful ones.

He was helping corporations buy his councilors, and he didn’t care so long as those same corporations dumped money into the city. Not as much money as some of the cities on the moons of Jupiter—cities owned outright by Aleyd or Fortion or other corporations—but enough to keep Armstrong in the black for decade or two.

As long as he was mayor, he wanted Armstrong to remain one of the greatest cities in the solar system. Hell, if he had his way, it would become the greatest city. Maybe it didn’t have the history of Paris, Dubai, or New York, but history wasn’t everything.

And that was the theme of this speech.

He really didn’t remember half the things he said here, but the crowd was clapping, people were buttonholing him, and he was posing for vids and pictures, glad-handing, like he had done since he ran for head of his neighborhood association at the ripe old age of sixteen.

And finally, it was done. His invaluable assistant, the dapper Hans Londran, put his small frame between Soseki and the last of his admirers, saying some nonsense about the mayor being tired.

Soseki wasn’t tired, at least not physically. He was just tired of the constant talk about nothing.

He let Londran and the security guards flank him as they headed out of the back room into the restaurant proper. This was on Soseki’s orders. Most politicians snuck in and out of venues like common criminals. Soseki went through the restaurant, grinned at the patrons, shook a hand or two, and then waved as he headed out the front to the limo, paid for by the city, and always at his disposal.

He ran a finger over his palms, making sure his chips were protected and the SkinSoft covering he wore wasn’t bunched up. People wanted to think they were shaking his actual hand, not touching some kind of pseudoskin covering that protected him from everything from germs to rapid-acting, touch-sensitive poison.

The door opened, he smiled, and patrons at white-cloth covered tables, started shouting his name.

This part of his job never got old. He shook hands, grinned, greeted a handful of people he knew, and bustled out the door in a blaze of lights. The limo had touched down on the sidewalk—the only non-emergency vehicle in Armstrong that could—and one of his guards opened the door for him.

He was almost there when a hand brushed his sleeve.

He turned but didn’t see anyone except Londran and the guards, all frowning at him.

That wasn’t a stranger’s voice. That was Londran’s and he looked concerned. Why would anyone look concerned, especially after the meeting had gone well, the money donated was within expectations?

Then he realized what was going on. He hadn’t moved from the entrance to the restaurant even though he thought he was walking across the sidewalk. He should have been to the limo by now. He should have slid inside. He should be careening through Armstrong’s streets, heading to the next meeting, working on the next crisis.

He usually asked “What?” when Londran used that tone. But Soseki couldn’t move his mouth or his legs. And his arm ached.

No. It didn’t ache. It was cold. He was cold. Chilled like he hadn’t been since that conference of Earth Alliance mayors held in, of all places, Alaska in the winter.

And everything would stop.