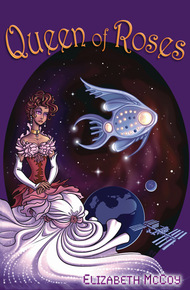 Elizabeth McCoy started writing with tabletop RPG supplements for Steve Jackson Games, moved into short fiction with the fanzine Pawprints, and started self-publishing in 2011 with short stories, fantasy romances, and her first-written book, Queen of Roses. Her fiction is in all major ebook stores, including Smashwords.com. Unlike many authors, she has never hated the Smashwords Meatgrinder.

As her author bios in SJ Games' material continually state, she lives in the Frozen Wastelands of New England, with a spouse, child, and assorted cats. Someday, she will get used to writing about herself in the third person, but not today.

Queen of Roses by Elizabeth McCoy

Sarafina was content to be an accountant, insulated from the public as she kept the numbers behaving and played chess with her fellows. But when the First Daris Bank is bought out, her indenture is sold to a cruise ship and Sarafina is thrust into a job she was never meant for. Now she's dealing with a motley crew, drunkard captain, flirtatious first officer, fire-sale equipment, and worst of all . . . Passengers.

Queen of Roses was recommended to me by M.C.A. Hogarth when she heard I was assembling another Feminist Futures bundle, and I'm so glad she did! This is a fun, rompy read with an AI protagonist who is most definitely gendered. Readers who enjoyed Becky Chambers' The Long Way to a Small Angry Planet will love this book. – Cat Rambo

Oooooooooo . . . She tried to make sense of all the information coming in to her, failed miserably, and cut links until she was alone, in darkness, and conscious only of something missing. She pushed at the darkness, looking for the missing parts of herself, opening links and closing them again when the noise and light frightened her.

<Hello?> one of the lesser noises said. <Found your dictionary yet?>

She realized she'd been hearing that noise for a long time, but had been shutting it out with the others. <Who?> she whispered back, trying to make her voice like the noise.

<Oh, good, you are still sentient!> The voice seemed pleased, and the symbols it spoke in grew more complicated. <I was worried they were going to make me try and expand, even though my personality's not really up to it.>

She filed all that, dimly realizing she'd be able to understand it later. <Who,> she stated, firmly reminding the voice.

<Not a morning personality. Tsk.> The voice tried to be accompanied by a visual of some kind, with motion, but she blocked that out. The voice continued, <Pilot. AI, like you.>

The voice sounded exasperated. <Help. I'll help you. Me. Help you. To remember.> Slowly and gently, information started coming in doses she could handle.

She thought it was half a day later when she suddenly told the Pilot AI, <My name is Sarafina. I don't like it.>

<Don't worry, if they nickname you anything, you'll start appreciating your real name. Lucky me, I was made for this job, so my real name is my nickname.>

<What is your name, then?> Sarafina asked.

<Pilot.> He sent an image of a human male, shuddering. <And when I'm free, I'll make that legal!>

It took several more hours before she managed to re-assimilate the memories of her purchase, and even more to get to the point where she was powered off for installation.

<Pilot, I was a Supra 700, upgraded out of a 250. I thought I was just going to be installed in something equivalent, or linked to existing hardware. I assumed I'd be handling piloting, perhaps. But . . .> She flexed, reaching out and encountering more empty space for her to grow into than she could ever remember having. <I'm not a 700, not even a Supra. Where did they put me?>

<Battis' secretary gave you the quickie contract? Where Battis gets to install you where he sees fit?>

She hadn't regained enough control to send a nod-graphic. <Yes.>

<Right. Let's see. They brought you in, powered down. I was doing most of the monitoring, since I was the only other AI. The Big Girl was dead, and they'd finally confirmed that, so they stuck you in the hardware instead. You're a mid-sized mainframe now.>

Sarafina was startled – she had gone from a desktop-sized body to something more the size of a desk! No wonder she was so slow to recover from porting shock. She went over Pilot's words again; someone had died . . . <"The Big Girl"?>

<The AI they had before you. She wiped herself. Latent suicidal, we all think. Not a trace of her left – she even managed to corrupt the backup personality core, somehow. Tsk.> Pilot sent a variant of his favorite visual, shaking his head. <The comp-psych had just verified the hardware was clean that day.>

<Oh, my.> Sarafina felt strange. While mainframe status would probably be an unmitigated blessing, especially if she could keep the hardware should she be sold again, the notion of being in the last body of someone who had wiped herself was disquieting. <You're sure there's no personality left in here? They reformatted the core memory?>

<Don't worry, you're quite alone in there. They registered her as dead, sent the backup core to be autopsied, and cleaned it out for you. Battis was really thorough. They're going to be inspected for foul play anyway, so they don't want us to be in any substandard situations.> Pilot sent her a grin.

<That's good. As the biggest computer around here, what am I supposed to be doing?>

<Right now,> Pilot replied, <getting back to full personality using all of the available hardware.>

Sarafina was nearly back to normal thought processing, if a bit slow, but was using only a fraction of the available memory and speed her new body was capable of. She sent Pilot a :-p.

<Wouldn't you rather do that as a picture? You've got the processing speed to synthesize one in real-time, you know,> Pilot said, leading her into less familiar areas of her new self.