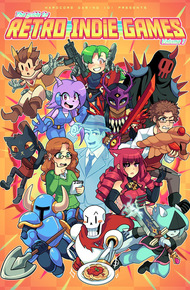 With the introduction of Steam and other digital download services, the indie game development scene has greatly expanded, allowing the return of classic genres that were previously thought to be unviable. Thus, classic games like 2D platformers, Metroidvanias, point-and-click adventures, role-playing games, and shoot-em-ups have returned to the limelight. HG101 Presents: The Guide to Retro Indie Games Vol. 1 catalogs some our favorites of these types of games, including Shovel Knight, Freedom Planet, Undertale, Night in the Woods, Dust: An Elysian Tail, Assault Android Cactus, nearly all of Wadjet Eye's library, and many others!

Retro games remain trendy, but so, increasingly, are games made by indie developers influenced by the titles of yesteryear. Once again, Kalata manages to introduce readers to a surprising gathering of relatively unknown but fantastic games, most of which are much easier to hunt down (and afford) than the games that inspired them. -David L. Craddock

It may feel like a long time ago, but the PlayStation and PlayStation 2 generations (approximately 1995-2005) were hard times for fans of 2D games. The shift to 3D rendered these types of games obsolete, or so the publishers felt. It wasn't until the advent of digital distribution services like the Xbox Live Arcade, PlayStation Network, and Steam that these types of games were resurrected. Not only was it a venue to sell games outside of the norm, but it also allowed independent developers easier access to sell their titles, and many patterned their works after the classic 8- and 16-bit games of their youths.

Now, in 2017, we're living with an embarrassment of riches. It used to be that retro video game fans would either need to import games from Japan at great expense, or get stuck playing portable titles, since those were the few places 2D games were released. Now, there are legions of classic style platformers, RPGs, adventure games, shoot-em-ups, and more, all available for extremely reasonable prices, just a few clicks away. Many of these games also benefit from years of design evolution, and there are many cases where the fresher games even beat the old classics. (We highlighted a bunch of these in our 200 Best Games of All Time book, though they have full size write-ups here.)

Since HG101 concentrates on retro games, it made sense that we started covering these "new retro" independent games, so eventually we decided to compile it into a book. Some of these are reasonably well known among the indie scene, but we've made sure to include some of the less famous titles in hopes to give them some more exposure.

To be honest, we're using the term "retro indie" pretty loosely here. Games like Night in the Woods don't directly recall any classic games, but the spirit fits with point-and-click adventure games of old. So, art style isn't really a prerequisite. It's also difficult to define "independent", because sometimes these games are developed by a single person in their home office, other times they are small companies separate from the usual AAA conglomerate. So please don't take these labels too seriously ? we'd rather cover more awesome new games rather than exclude on technicalities.