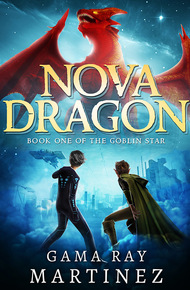 Gama Ray Martinez lives near Salt Lake City, Utah. He moved there solely because he likes mountains. He collects weapons in case he ever needs to supply a medieval battalion, and he greatly resents when work or other real life things get in the way of writing. He secretly hopes to one day slay a dragon in single combat and doesn't believe in letting pesky things like reality get in the way of his dreams.

or all that humans accomplished, some things seemed forever beyond their capabilities. The vast distances between stars remained a barrier that no new knowledge could overcome, and so humanity turned to the old. A blending of science and magic finally allows them to leave Earth, but space was not empty. The ancient races, the elves, the dwarves, the goblins, and so many others had learned this lesson first, and while humans studied science, they used their magic to explore the universe, and when humans finally left their home, the old ones were waiting. Some were allies. Some were enemies, and some remained a mystery. Now, a human child finds himself caught up in a plot to uncover the legacy of the most powerful race to ever inhabit the stars.

Mistress Elawn focused her emerald eyes on Radek. The elven teacher tapped her foot on the ground, and he could feel the rest of the students staring at him. He could almost hear them whispering 'stupid human' behind his back. They probably would've answered the question already, if she had asked them. He scratched his shoulder. He still wasn't used to the heavy brown robes the elves wore to school. He didn't understand why a race advanced enough to build a space station between the stars of a binary system couldn't figure out how to make clothes that didn't itch. The teacher raised an eyebrow, and he forced himself to stop scratching. He tried to remember. The answer was right on the tip of his tongue.

"Dwarves carve runes in stone. Elves sing to crystals. Humans chant to empower wood in the shape of staves or wands. Goblins..." He searched his memory. "Goblins shape gold?"

The students laughed, and Radek felt his face heat up. Mistress Elawn cleared her throat, and the class went silent.

"Goblins use bone magic. Shaped gold was used by dragons before they retreated from known space. Certain of their artifacts still use it. Dwarves have some aptitude there as well, which is why they so often utilize dragon relics. It's an example of cross species magic, but if goblins tried to build a star drive powered by gold, they would end up scattering their molecules across half a light year."

The crystals at the front of the room chimed and alternated between blue and green. Mistress Elawn waved a hand and sang a word that faded from Radek's memory almost instantly. The crystals dimmed. She walked to the front of class, her feet barely disturbing the illusion of grass covering the floor.

"For tomorrow, look at the files on cross species magic, particularly on what types of magic each of the major races can use." A pudgy boy with a golden link hanging from his left ear raised his hand. He snickered and looked at Radek. Mistress Elawn didn't even glance at the student. "Yes, Fanul, that includes humans. You'll give a ten-minute speech on the unique human ability to integrate the magic of other races into their own."

Fanul lowered his hand and glared at Radek, as if it had been his fault. Mistress Elawn raised a hand, and the students inclined their heads. Some sang a few words, and their belongings deposited themselves in their bag, but Radek had to gather his by hand. They all stood and filed out of the classroom. Radek was the last to finish packing up his things. He rolled up a scroll and shoved it into his bag before standing to leave.

"Don't let them bother you, Radek," Mistress Elawn stumbled over his name, incorrectly emphasizing the second syllable as she would for an elven name. "Even elves can be cruel when they're children."

He sighed and nodded. 'Even elves' as if elves couldn't be just as mean as humans. They liked to pretend they were better than everyone else, but according to his father, the first human ambassador on the elven space station Vanel, elves could be just as selfish and stubborn as anyone else. Radek didn't say any of that, though. Instead, he just smiled.

"Good, and work on your song. Just because you can't become a full singer doesn't mean you shouldn't learn enough to pick up your supplies."

He turned away as he felt his face heat up. It was useless to say he'd been working on his song for months and still hadn't been able to do so much as light a candle. Regardless of the fact that his father's files said a human should be able to learn at least a little elf magic, he just didn't seem to have the knack for it.

"Yes, Mistress Elawn." He slung his bag onto his shoulder. "Can I go now?"

"Of course. I'll see you tomorrow."

Radek walked out of the classroom and into the hall. Blue shafts of sunlight shone through a canopy of trees, and a cool breeze carried the scent of pine to his nose. It wasn't really pine, of course. A certain type of grass from the elven home world, with a name Radek couldn't pronounce, smelled almost exactly like pine, and they liked to use it in the illusions they created to decorate the space station.

He strode down the forest path, trying to ignore the looks the elves gave him. It didn't help that he was as tall as most elven adults, who rarely grew taller than five feet. He kept his head down as the path wound around a corner that had been made to look like an oak tree. Suddenly, one of the roots rose up and wrapped itself around his ankle. He yelped as he fell, and though the ground might look like grass, it still felt like metal when he slammed into it. He looked up to see a group of students pointing and laughing. He glanced down. The root had released him and was, once again, immobile next to the tree. He glared at them as they ran off. He wasn't even sure how they'd managed to trip him with an illusion, but then, he barely understood even the most basic principles of elven magic.

"I miss Treya," he said under his breath.

His father had been governor of Treya, the first human colony outside of the Sol system. Radek had friends there. They'd all been excited to build a home on a new world, but then the goblins had attacked the elves, and had plunged that part of the galaxy into war. The humans had eventually joined with the elves, and once the war was over and the Rageshian Treaty signed, the elves had invited the humans to send an ambassador to the space station Vanel. Radek didn't understand the politics involved, but his father had been chosen, and they had come here. Now Radek had to go to class and help be a bridge between humans and elves, whatever that meant.

He sighed and picked himself up off the ground. As soon as he was on his feet, something crashed into him from behind, and he fell onto his stomach as the thing pressed onto his back.

"Oh, sorry," a voice said from atop him, and a weight was lifted off.

Radek stood again and turned around. An elven child, no older than Radek himself, though shorter by nearly a foot, stared up at him. He wore the traditional student's robes, but they were torn and covered in oil stains as well as a few other substances Radek couldn't identify. He had dirt in one ear and his sandy hair went out in all directions, making him look like a bush as much as anything else. Of course all elves were actually plants, but most didn't look like it. The elf's gray eyes went wide.

"Oh, I thought you were an adult. You're the human kid, aren't you?"

The elf started to incline his head but stopped after a second and held out his hand. Radek blinked at it for a second. He took it, and they shook.

Radek stared at him. "That's not a human name."

"That's not what makes a human name."

The elf looked up at the ceiling, the elven version of shrugging. "It's close enough."

"Why don't you tell me your elf name?"

The elf smirked. "Why don't you tell me your elf name?"

"No you don't. You just put together a bunch of sounds."

The elf let out a breath. "That's what human names are."

He looked at the ceiling again. "If you say so. So what's your elf name?"

Radek stared at him for a second before sighing. "Lalon."

The elf raised an eyebrow. "That's not an elf name."

Radek clenched his teeth. "Why don't you tell me your elf name so I have a better example?"

"There are lots of people here who have elf names. You have plenty of examples. You should be able to come up with a better name than Lalon."

"Are you going to tell me your name or not?"

He looked at the ceiling. "Ovian. I'm going to the goblin enclave. Do you want to come?"

Even during the war, the goblins had maintained a presence here, and Vanel had often been used as neutral ground. They had kept their enclave even after being defeated. Radek looked around, but no one was close enough to hear. They seemed to be in an empty forest. There was even an illusionary animal that looked like a squirrel with two tails jumping from tree to tree.

"I thought the goblin enclave was off limits."

"Well, yes. If we were allowed there, it wouldn't be any fun."

"But..." Radek tried to think of a reason not to go, but almost everything he'd done since he'd gotten here had been boring or lonely or both. This was the first thing that wasn't. After a few seconds, he nodded. "Let's go."