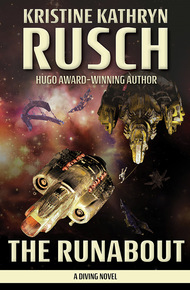 The Runabout by Kristine Kathryn Rusch

A graveyard of spaceships, abandoned by the mysterious Fleet thousands of years earlier. Boss calls it "the Boneyard." She needs the ships inside to expand her work for Lost Souls Corporation. Yash Zarlengo thinks the Boneyard will help her discover if the Fleet still exists.

Boss and Yash, while exploring the Boneyard, discover a small ship with a powerful and dangerous problem: The ship's active anacapa drive.

To escape the Boneyard, Boss must deal with the drive. Which means she'll have to dive the ship on limited time and under extremely dangerous conditions. And she can't go alone.

I can hear them, running up and down the scales like a waterfall, their chorus twice as loud as the rest of the music floating through the Boneyard.

Of course, I know there is no music here. I am hearing the malfunctioning tech of a thousand, five thousand, ten thousand ships, all clustered together in an area of space larger than some planets. The sound is the way that my head processes the changing energy signatures, although, oddly, I can't hear any of it when I have my exterior communications link off.

Anyone with a genetic marker that ties them to the Fleet can hear this. Everyone else can't.

Although I've never really tested this assumption thoroughly. I don't know if those of us with the marker hear the same thing.

My mind is wandering, which is dangerous during a dive. I have just exited the Sove, a Dignity Vessel we pulled from the Boneyard months ago, and I'm heading toward a completely intact Dignity Vessel only a few meters away. I'm wearing an upgraded environmental suit with more features than I've ever used before. I hate those, but I've finally gotten used to the clear hood that seals around the neck instead of a helmet like I used to wear.

We've sent a line from the Sove's smallest bay door to the only visible door on the Dignity Vessel, and I'm clinging to that line by my right hand.

I'm facing the Dignity Vessel when the sound catches me.

Elaine Seager, one of the original Six who learned to dive with me way after we discovered the need for markers, is slowly working her way toward the other Dignity Vessel. She's ever so slightly ahead of me on the line. I was the second one to exit the Sove.

Orlando Rea, another one of the Six, is waiting to exit the Sove. We have strict procedure about the distance between divers on a line.

In fact, we have strict procedures about everything.

The procedures keep us safe.

"What's the holdup?" Yash Zarlengo asks from inside the Sove. She's monitoring us. She hates diving, and avoids it as much as possible.

She'll have to do a lot of it on this trip—she often has to dive when we're in the Boneyard—but she's going to dive only after we know what's inside our target vessel.

I snap to attention, still caught by that sound.

"I'm the holdup," I say. "Orlando, you need to go around me and catch up to Elaine."

"Not procedure, Boss," Orlando says from behind me. His tone is half-amused, half-chiding. I'm the one who always harps on procedure.

But he does as I ask. He exits the bay door on the right side instead of the left, and grips the line.

I flip my comm so that Yash can't hear what I have to say to the other two divers.

Orlando looks around—up, down, sideways. There are ships everywhere. Different kinds, different makes, different eras. As far as we can tell, they're all Fleet vessels, although some of our team back at the Lost Souls Corporation hopes that we'll also find vessels we've never seen before.

There's a theory that these ships were stored here during a protracted war.

I think the theory's wishful thinking. Because I love diving ancient and abandoned ships, I've learned a lot about history. And one thing that unites human beings, no matter where they live, is their ability to take a historical fact and discard it for a story that sounds ever so much better.

The war sounds so much better than a ship graveyard, put here to store abandoned ships until they're needed—a kind of junkyard in space.

I've stopped arguing that point of view, though. I figure time will tell us what this place actually is.

I can't see Orlando's face through his hood. He has turned away from me.

I wish the new suits had one more feature. I wish we could monitor each other's physical reactions in real time. We send that information back to the Sove as we dive, but we don't give it to each other.

We hit the waves as we move across the emptiness from one ship to another, sometimes one wave in the short distance, and sometimes three dozen waves.

"Yeah," he says softly, in answer to my question. "I do hear that. I can't tell where it's coming from."

Elaine has stopped a few meters from us.

That annoyed question went across the open channel, which means Yash heard it.

"Is there a holdup?" she asks again. "Besides Boss?"

I decide to come clean. "We've got a strange energy signature."

"I'm not reading anything from your suits," she says.

I sigh silently. We're now getting to the thing she hates—the musicality of the Boneyard itself.

"Me, too," Orlando says. He doesn't have to. I hope he's not protecting me.

Even though Yash represents the Fleet on these dives, I'm in charge of them. I still run the Lost Souls Corporation, even if I've delegated many of my duties to Ilona Blake.

I never go on dives where someone else is in charge.

"Well," Yash says, "whatever you 'hear' isn't important. Examining that ship ahead of you is."

She's right. We are salvaging ships from the Boneyard, and it takes a lot of work. We've taken seventeen Dignity Vessels so far, but not all of them work as well as we want them to. We've ended up using six of them for parts.

Orlando turns toward me, remembering, maybe at this late date, that I'm the one who gives the final orders here.

I nod, then sigh.