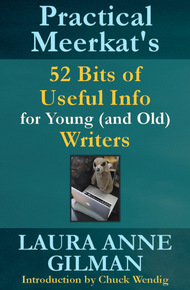 Writing is a craft. Publishing is a business. Today's world requires you to understand both.Drawing on her decades of experience on both sides of the editorial desk, and taken from the popular "Practical Meerkat" blog series, award-winning author and former NY editor Laura Anne Gilman will help you navigate things like Knowing When Not to Complain (and how to do it), Bar Schmoozing with the Big Dogs (even if you don't drink), Dealing with a Difficult Editor/Agent, and 49 more!

Like me, Laura Anne Gilman wrote novels while maintaining a major editing job. She spent twenty years in traditional New York publishing, editing science fiction, fantasy, and whatever else the company wanted her to do. Then she jumped to full-time freelancing, publishing dozens of novels. She's seen the publishing business from all sides, and not only lived to tell about it, she's decided to share it as well in this book. We're lucky she did. – Kristine Kathryn Rusch

Sometimes, while writing, you come to a point where you don't know what the next line is supposed to be. You have an outline, you have A Plan, you may even have a deadline… but it's not happening. You're stuck.

Panic! Cold sweats! Frantic twitching and raids on the chocolate!

Some people call this writer's block, and come up with all sorts of ways to "unblock" themselves. Others insist that it doesn't exist, that a block is…well, they have a lot of theories that doesn't account for the fact that sometimes… we hit a wall.

I don't believe in writer's block as A Thing. But I do believe that this particular blockage is very real. It's also nothing to panic – or even worry – over.

Yes, that's what I said. That "OH MY GOD I'M STUCK" feeling? Listen to it, but don't panic.

What a full-stop generally means is that – despite all your notes, your outlines, and your expectations, things have changed, and you're not entirely sure where the story is going, right then. When it throws up that wall, your brain is telling you "stop and think about this, before we go in the wrong direction."

That's a good writer-brain, doing its job. Give it a cookie, and calm down, and think about it. If talking works, grab a friend, or your critique partner, your agent or even your kid, if you can trap them in the car long enough. You're the boss of your story – get it to work again.

(Aside: yes, I believe in the presence/importance of the muse. I also believe that the muse has nothing to do with getting the work done.)

I've walked enough writers through this process – and faced it myself – to determine that the best solution is to go back to where the writing last flowed freely, the last time you were deep in the groove. Go back, and start again. In knitting, I'm told, that this is called frogging – for "rippit" – rip it out.

If that means before "Once upon a time," then so be it.

Here's one of the great secrets about writing: There's nobody looking over your shoulder, scoring you on style points. Take another start. Slip, fall, get back up, change your mind, scribble something, draw a swooping arrow from one paragraph to another, yank entire sections and write entire scenes that you know won't make it into the final draft until the words flow again. In many cases, you need only back up a page or two – and yes, you'll know it when you find it. Trust yourself; you knew what wasn't working, you'll remember what did. As soon as you back away from the wall, it will disappear.

And, although you will probably never reach a point where the full stop/wall is not a possibility, the more alert you are to the signs of a recalcitrant story, the swifter the recovery. If you listen to your gut, back up rather than trying to charge forward, the story will get written.