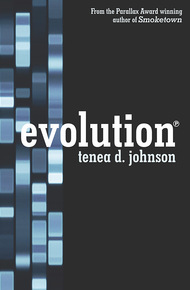 Tenea D. Johnson lives near the Gulf of Mexico where she builds an arts & empowerment enterprise. Her short fiction appears in anthologies like Mothership: Tales from Afrofuturism and Beyond, Sycorax's Daughters, and Blue and Gray: Ghost Stories from the Civil War. Her musical stories were heard at venues including The Public Theater and The Knitting Factory. Her books include Starting Friction, Smoketown, R/evolution, Evolution, Blueprints for Better Worlds, and the brand new Broken Fevers. Publisher's Weekly had this to say about her new release: "The 14 hard-hitting, memorable short stories and prose vignettes in this powerhouse collection from Johnson … are astounding in their originality." Her virtual home is teneadjohnson.com. Stop by anytime.

Nearly 200 years after being gifted with exceptional genetic adaptations, William Woods still walks the earth, as strong and physically healthy as the day he was born. The country is not so fortunate.

Corporations, in the hunt for his elusive genes, have ripped apart communities and twisted laws to try to cash in on his slow aging, and its promise for immortality. Their minions in the government have erased the past to control the future.

To preserve his anonymity and, with it, a chance at equality for millions, he's witnessed the deterioration of personal freedoms, ethical boundaries and basic infrastructure. But some acts he can't just sit by and watch.

In his quest to save people from being hunted down, William happens upon the survivors who will shape his destiny and the world's fate.

Now that those in power have sidelined all progress they can't profit from, it's up to William, Lillian, a girl born in a marine salvage yard and destined for more than the depths, and us others to wrestle back evolution, lest it become one more product to manufacture cheaply, poorly and for one faction's gain.

William was a collector. It was hardcoded into his soul as well as his DNA. Even without his brothers, without the people of Mound Bayou that he and his brothers were designed to protect, without his daughters or wife, he still sought to save—lately that meant preserving more than rescuing.

Idioms got lost—just like people, places and histories. So William collected them too, just as he did the food caches that kept him going and the DNA housed in bearish capsules.

So even if folks no longer used the phrase, William well knew, and had duly recorded in his notepad, that the road to hell is paved with good intentions.

For his fault, William drove that road every chance he got. The route required pragmatism, and today that meant the byways and deserted service roads that lined the 95 South corridor since its privatization.

On these backroads William could relax a bit. Drones tended not to patrol them, and the Rep War had hardly touched them. Most buildings still stood. More than a few of them bore intricate "Everlasting" tags scrawled and scribed onto their walls. In Southern Georgia most spraypainted it in orange; here the taggers favored red and heavy acrylics. William searched for some distraction.

Taking a deep breath, he exhaled into the emptiness, kept his eyes on the asphalt, uninterrupted by lines that had faded away long ago, the road itself graying to white.

For all the things he missed, he never lamented the demise of rush hours. For years, after floods came regular as rain, a steady stream of evacuees packed even the backroads looking for the next place they'd have to evacuate.

Then corporations' heavy tolls and bundled auto access plans priced the masses out of personal transportation. William had monitored the development with trepidation. With his accumulated wealth, he could pay to access the roads, but on toll highways he'd stick out just for driving; worse, everyone who'd been pushed off the highways would crowd the backroads and notice him for every other reason.

Turns out it only took fifteen years for fuel and recharge costs to clear those roads as well.

That quickly, William's drives became a rare pleasure of solitude and speed. He'd bought the 32 for its comfort as much as its utility. In the decade after Mound Bayou burned he didn't care what happened to him. When he returned to himself, he found and fixed up a truck to hide in as much as to travel, but after the farm's warmth he ached for a home and chose the 32.

Its cab, deep and high, accommodated him and the cargo area had enough length that, for the first time in decades, he slept stretched out. He painted it matte black for stealth and traded rare seeds for reinforced suspension that could handle the deteriorating roads and the heavy loads he picked up, as well as the one he carried. Thanks to Bruh's instruction, every sensor and security ware device on the underground market lit up the dash. William even kicked in a cache of real cash for 32 cylinders to smooth out the electric torque.

On stretches like this one, wide and empty, he let the 32 loose. He watched the speedometer climb, relaxed into the enveloping silence from the engine. Ambient sounds filtered in, but the quiet made him feel as if he flew.

Sky dominated the landscape. Much of the earth in this part of Georgia had eroded, carried away by water that endlessly carved new boundaries. In the distance, off to the right, rain fell in a thick, diffuse column. If he squinted he could almost see beyond it. But he'd be there soon enough. The emergency scanner sat quiet on the dashboard, a comfort.

He sped across the state line and left Georgia behind, anxious to see what was left of Miami since he'd last ventured into the Wetlands.

The Rep War didn't cause the Wetlands and the sea level started to rise well before the war began, but they were inextricably linked.

Ninety years ago, the government abandoned Florida—first to the white supremacists and Rep War vets who tore a swath down the middle of the state and, after, to the rising waters. When the National Flood Insurance Program paid out on billionaires' homes but FEMA failed to provide adequate tents to poorer victims, even families took to the streets. The rioting started in Jacksonville and burned its way down the Atlantic coast until it hit a storm surge and fizzled in the wall of water.

Haitian refugees built a town, La Vague, in that spot. William would stop there first.