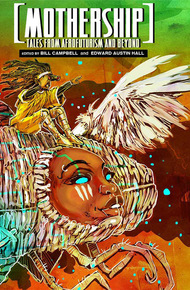 Mothership: Tales from Afrofuturism and Beyond edited by Bill Campbell and Edward Austin Hall

Mothership: Tales from Afrofuturism and Beyond sets a bold new course for anthologies by showcasing the work from some of the most talented writers inside and outside speculative fiction. The authors in this anthology have earned such literary honors as the Pulitzer Prize, the American Book Award, the Hugo, the Nebula, and the Bram Stoker, among others. They have garnered numerous accolades and have sold millions of books around the world. Many of their names are likely to be new to you; Mothership is your invitation to get acquainted with them and their writing.

I Left My Heart in Skaftafell

He was meek, homicidal, wore a long scarf tied once around his neck as must have been the style for trolls that year. I never saw him board the bus, but it may have been in Varmahlid, though I can't be sure since I slept so much as I traveled through Iceland.

I was there at the end of summer, August. Most folks in their twenties had already tramped cross-country in July so I found myself with the elderly wanderers. August was for the old-heads, and me. On wilderness trails I passed couples catching their breath and rubbing each other's knees through their waterproof pants. The Germans regarded me with tacky detachment, snubbing me while wearing bright red boots and brighter orange parkas. They seemed ridiculous and yet they looked down on me. I tried not to feel hurt by their disdain, told myself being excluded by them was like being kicked out of clown college, but you can guess how much it really bothered me.

Also, I had the amazing misfortune of sitting behind French people on every plane and bus. Minutes into a ride a woman or man brazenly checked that yes, there was, undeniably, someone back there, then slid the chair so far back I had a headrest against my gullet. Even when I asked, slapped, tapped, or pushed the seat, these folks only gave that stare the French invented to paralyze the dumb.

Luckily, the Icelanders liked me, even though I was an American. Because I was shy. Firm, polite, and quiet, a perfect personality for these reserved northern Europeans. Many times I was told so. "Don't take this the wrong way," one woman in a candy shop said to me, "but I explained to my co-worker that here, finally, is an American who isn't boring. Being loud and asking so many boring questions!"

Most Icelanders used English skillfully, but it was a quirk of speech that they said "boring" when they meant "frustrating." Like, "this knot in my shoe is so boring!" Or, "I can't reach my girlfriend, this connection is boring!"

So this was me: an American, not boring, black, and alone in Iceland.