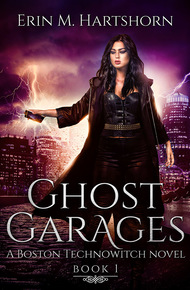 Erin M. Hartshorn lives in Pennsylvania with her husband, two kids, an English cocker spaniel, and a cat. She did her graduate work in fish olfaction (and yes, she's heard all of the jokes about how fish smell) before turning to words to make her living. Her fiction has appeared in Clarkesworld Magazine and Daily Science Fiction as well as in various anthologies, and has also been shortlisted for the Universitat Politècnica de Catalunya Award for science-fiction novellas. She currently serves as the vice president for the Science Fiction and Fantasy Writers of America.

To date, Erin has published three novels in her Boston Technowitch series, as well as two novellas available exclusively to newsletter subscribers. She also publishes mysteries under the pen name Sara Penhallow. She can be found occasionally on her website at www.erinmhartshorn.com/blog, or more frequently on Twitter @ErinMHartshorn (when she's not avoiding spoilers).

Pepper Karalis, Boston's only technowitch, doesn't spend a lot of time hanging out with other witches.

Most of the time, she's too busy working at a coffee shop and raising her twins to bother with magic, although it's there when she wants it.

But then she runs across the ghost of a murdered woman in a neighborhood parking garage — the first of many. The ghosts are raising tempers everywhere, and Boston's other witches are certain Pepper's to blame, even though she's doing everything she can to banish the ghosts.

A good story is a good story. Ghost Garages has elements of mystery, and fantasy, and both are layered into an entertaining start to a brilliant series. But I've got to be honest, even if that hadn't been the case, Erin M. Hartshorn would have gotten a read from me just for the series name: Boston Technowitch. Heck, just Technowitch probably would have done it. – Joseph R. Lallo

The first thing I noticed when Ximena walked in for her shift was her red eyes; the second was the unfastened pocket on the side of her purse where she keeps her rescue inhaler.

"Another bad morning?" I dropped a chamomile tea bag into one of our blue mugs and added hot water.

"That asshole." She meant her landlord. He was the only one who ever made Ximena lose her temper. That was one of the reasons she was invaluable for the Wicked Whatever Coffeehouse — the rush hour crowd from the T was a test of anyone's people skills. "He was smoking cigars again last night, and then this morning, when he finally dropped by to check out the leak in the sink, he blew smoke in my face. He said he didn't mean to do it, of course."

"Of course. Did he at least fix the leak?" I handed her the mug, but she klunked it right back down on the counter, sloshing some tea over the rim.

"He said he didn't see it dripping!"

If I thought that Ximena was done ranting about her landlord, I was wrong. "Did I tell you he hit on Missy last week? And the week before that, he pinched her ass in the elevator." A trace of her usual good humor peeked through. "I'm the only one who gets to pinch Missy's ass."

And they couldn't move, not easily, anyway. Sure, there were always places for rent, but those places weren't always affordable. Life in the big city. Or, in their case, out the T line far enough to afford on their salaries but close enough to commute to work and Red Sox games.

I'd heard it all before, and her tone said she knew she'd said it all before, but underneath the tiredness was that sharp and bitter hurt, the pain that even though her landlord knew she had asthma, he didn't care, didn't care about doing anything but getting his rent check every month. And I was tired of hearing about it. Time to do something.

I dug my cellphone out of my front pocket and popped open Bitter, my home-rolled app that linked social media accounts for people I wasn't happy with. The only software I knew of powered by magic — my magic, which I mostly used for rerouting electricity or the like. I never had to worry about a dropped phone call, since that was just another electromagnetic signal. In this case, I would be sending magic as a spell packet via the Internet. I'm a witch, not like the ones you'll see on the talk shows who are very proud of their designation and Wiccan heritage, but what I lovingly call a technowitch. And I didn't talk about it to most of the people I know. The other witches I knew just called themselves witches, but still didn't talk about their magic to the world at large.

Ximena's landlord didn't use a pic of himself as an avatar, although he had upgraded from default blank faces to chisel-faced cartoon characters, if you could call that an upgrade.

After a quick guilty glance around to make sure no one was watching — I tried to keep my hexing on my own time, not work time — I tapped her landlord's avatar, then the skull icon on the bottom of the screen. The skull reminded me that revenge was serious business, with serious repercussions, and all those other platitudes that my mentor Carole had tried to instill in me. It wasn't her fault that my natural talent was for payback. I preferred to think of it as just retribution for wrongs done — and this dude had certainly done Ximena wrong — rather than eye-for-an-eye vengeance feud where it simply escalated forever and nothing was ever enough to settle the debt.

It let me sleep at night, anyway.

And it wasn't like I was going to kill the guy or do anything that would hurt his chance of making a living. Ximena and Missy needed somewhere to live, after all. If something happened to the apartment, they would be hurt more than he would. No, my intention was for this to be just a tweak to his day to make him think twice about things. In magic, intention mattered.

The spell seemed ridiculous on the surface — I sent him a gif of Bugs Bunny giving Yosemite Sam an exploding cee-gar (as Sam would put it), with a bit of my magic tied on. The app tugged briefly at me, drawing on my magic, and then it was done. The gif would pop up on whichever social feed he looked at first, from some random name, and he'd never even think about it again. Well, it might cross his mind as a strange coincidence when the next cigar he smoked blew up in his face, but he'd certainly never think of it as cause and effect.

With luck, that would make him think twice about the cigars in general, and Ximena wouldn't have to put up with them as much. So she'd breathe easier and be healthier, which our tiny health plan would appreciate. Heck, even the landlord's health plan would probably benefit from his lowered risk of lung cancer. Wins all around.

Couldn't do anything about the leaky faucet in her kitchen sink, though. Can't do everything.