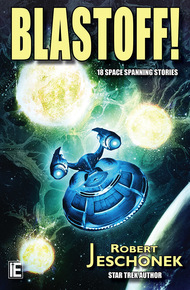 3…2…1…Blastoff! Join the ultimate voyage into the great unknown, one that will race you to the farthest stars and most distant worlds where only the strangest and most exciting adventures will be found. New for the Space Travelers StoryBundle, this collection of 17 stories by Star Trek and Doctor Who author Robert Jeschonek will dazzle you, thrill you, and make you think. The universe in all its brightest and darkest glories will unfold before you, changing the way you see the final frontier forever. Don't miss these tales of spacefaring furries, edible companions, metal-obsessed sky-miners, dog-propelled starships, serial killers giving murder lessons to aliens, and much more. These 17 stories, gathered together for the first time anywhere, will launch you out to the bleeding edge of known space…and so far beyond, you might never come home again.

Robert Jeschonek's Blastoff! features seventeen science fiction stories. Bob has written for Dr. Who and Star Trek and many other science fiction franchises, but when he writes his own stuff, it's so original that it's startling. You'll see what I mean here. (He too has a story in Fiction River Presents.) – Kristine Kathryn Rusch

From "The Stars So Black, The Space So White"

Imagine a ship the size of a small moon, consisting of huge, interlinked objects—sometimes spherical, sometimes cubical, other times elliptical or dodecagonal or jagged as a giant virus with a billion points and peaks. A ship that shifts and changes depending on its task or environment.

Now imagine the inside of such a ship, which is equally as miraculous as the outside. Imagine diving through a sea of lights and colors, a jumble of bubbles and pockets and pods alive with sound and motion...some right-side-up, some upside-down, some sideways or inside-out or outways-upside-in...all rising and falling and bumping and merging and mingling...a harmonious bedlam fit to drive a sane man mad or a madman sane.

And all through it, imagine the life of a hundred-thousand worlds, from the brobdingnagian to the microscopic...all thronging in this vast and tumbling tumult. Imagine feathers, wings, scales, claws, beaks, fur, bone...skin, fluid, ooze, fumes, leaves, stems, crystals...chirps, howls, growls, chatters, barks, clicks, burbles...all of these and more.

Imagine all that, and you'll have some idea what the inside of the Peacefaring Manyfold Transitory Translightenment Construct, Constant is like. The Transit. My home.

And you'll know, at least a little, why I love it so. You'll know why the day they brought me here from Georgia was the best day of my life.

Diving down through the zero gravity "Flow" that exists between pockets and bubbles, I swoop past busy shipmates on their way to other destinations. A voice chimes in my head via Mentacom, the telepathic intercom that speaks in whatever language you understand best.

I see my own station below, a figure eight archipelago of chrome, glass, and superneuroconductive organo-ceramics sparking with current. As I drop toward it, localized gravity rises, reeling me in until I land lightly on the polished floor.

"Rudy!" One of my colleagues, a being I call Paraffino, waves his sixteen waxy arms. "Take a look at the data from our scans of the Fractal Tracery."

I hurry over and lean in beside him, taking in the flurry of multicolored holographic text dancing in midair around us.

"No life signs." I can't keep the disappointment out of my voice. "And no power."

"Except the battery backup that is powering the distress beacon." says Paraffino.

"Here's a question," says a tiny voice in my left ear, the whine of an insect. "Why does the FracTrace appear to be cut in half, yet it bends space-time as if it were one thousand times its recorded size?"

I scowl. "Some kind of sensor mirage?"

"Considered and discounted." The tiny voice's owner flits in front of my face—a silver mosquito-like creature half the length of my little finger. I call him KeeZee McGee. "Diagnostics reveal zero chance of impaired functionality in our sensor arrays."

"What about psychic mirages?" I raise an eyebrow. "Maybe the sensor data only looks hinky because our minds are being warped."

"Unlikely." Another voice speaks up across the archipelago—make that five hundred voices, a chorus of every pitch and timbre singing as one. "The Mindset system confirms no perceptual defects in any member of our crew." The chorus belongs to a toothy shark-bunny thing I call Adorakilla.

"We need to send in a probe," says another colleague—a kind of half-rock/half-bush I call Stick-n-Stone. Her voice sounds like crackling gravel mixed with rustling leaves. "If anyone from the FracTrace is still alive, they must be on the other side of that phenomenon."

"Whatever it is," says Paraffino.

Some of us are about to find out. Just then, the Mentacom announces a mission to the derelict vessel, leaving in five minutes. Guess who's part of the Go Team?

Stick-n-Stone, for one. "Better go grab my gear." She rolls over the edge of the archipelago, where the Flow spins her off into the heights.

"Wish me luck." I smile and salute the others with flattened palms. "If I don't make it back, give my Zeppelin collection to Gassy Rictus."

I laugh as I leap up into the Flow. I've come up with so many nicknames, they can't always tell the real ones from the fake anymore.