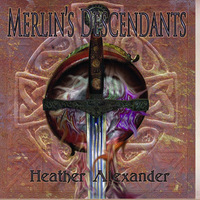 Alexander James Adams has been making music since childhood after learning to read sheet music before he could read books. An accomplished singer, songwriter, and musician, Alexander frequently accompanies his vocals with guitar, fiddle, mandolin, and a variety of percussion.

Alec may be singing with his guitar and fiddle at a Irish pub one night, playing fantasy rock with Tricky Pixie another, and setting the mood for a wedding on a third. He frequently performs at Renaissance Faires, conventions, and private parties. His music is known nationwide and also through Europe especially in Germany and the UK.

He recently guested on the album “Come Find Me” by Fox Amoore recorded in Abbey Roads Studio, London and has been enjoying other musical engagements with other artists performing music across the globe.

His most current works are featuring Steam Punk and classic Faerie Tales, some of which have been released on Bandcamp for digital download.

Alec is also the appointed heir to Heather Alexander. Heather was actually a changeling who was called back to Faerieland in November 2006. It was at that same time, Alexander, the child who had been replaced by her, and been raised in Faerieland, was released after beating the Faerie Queen in a fiddling contest. Thus, Alec now carries on Heather’s musical legacy and her magical prowess.

Alec lives with his wife and their multiple rescue animals in the wilds of Wisconsin eating cheese and homemade lefse.

"Merlin's Descendants" featuring Heather Alexander: Music inspired by the five book series of the same name written by Irene Radford, this collection celebrates the blending of early Celtic Christianity and Ancient Pagan rituals as it grows from the age of Camelot to the settling of the New World. In a new perspective of old history, this music captures the times where king and country are threatened and magick and ministry must work together to unite the two as one. Tribal and spiritual in unison, Alexander casts an enchanting collection of prayer and spell that will open the heart and mind of all who listen.