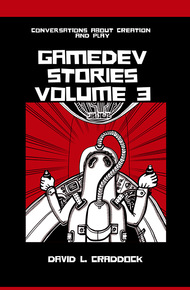 Video games comprise a multibillion-dollar industry thanks to the people who make and play them. From designers and producers to artists and programmers and passionate communities, each plays a role in maintaining and advancing the medium of electronic entertainment.

Each has a story to tell.

Collected from interviews with developers of coin-operated games and their conversions, GameDev Stories Volume 3: Conversations About Creation and Play collects interviews about the rise and fall of arcade games, and the particulars of bringing them to home systems and computers.

More is better than fewer. That's the stance I take on interviews for my book, and Arcade Perfect was no exception. GameDev Stories: Volume 3 collects over 100 pages of full interviews, the vast majority of which never made it into Arcade Perfect. – David L. Craddock

Craddock: At the outset of MK1's development, did you ever think you'd get the opportunity to make a sequel?

Tobias: I don't remember ever assuming that there would be a sequel. In fact, after the first MK, Ed and I wanted to do a licensed Star Wars game. That was before we realized just how successful MK had become. I remember Ken Fedesna, who was our boss saying "What are you talking about with Star Wars? You guys are doing a sequel to MK!"

Of course, we were excited for the opportunity. For me specifically, there were lots of details that we embedded in our fiction that alluded to a larger world story and I was excited to have a chance to explore it further and expand on the themes.

MK changed my professional life forever. Our MKII team only grew by one additional artist. The core group of Ed and me, Dan Forden, and John Vogel remained although I believe John may have been busy with other projects as well. The new artist who joined was Tony Goskie and he was a significant addition. Our fiction in MKII introduced the realm of Outworld and Tony was a huge part of visualizing what it would look like.

Was Kintaro easier to create, move, and animate after that initial experience making Goro?

Tobias: John Vogel animated Kintaro in MKII. In fact, I remember John buying action figures and cutting up and gluing parts of armor onto the new puppet that Curt had created. The puppet was created the same way as the original Goro. I think John did a better job of animating Kintaro than I had done with Goro.

Craddock: In evaluating MK1 and working on MKII, where did you see room for improvement? What did you want to do differently, or do more of?

Tobias: We knew that we were going to have more time on MKII and that there were improvements to the process that we could make. The compressed schedule of the first game was cause for a lot of happy accidents in design, but now we could take those learnings and create something bigger and better. On the art side of development, there were things like color palette management and moving from an analog to digital camera capture with the characters that gave them a much cleaner look on MKII.

Craddock: Who came up with the Noob Saibot character?

Tobias: That was Ed! He was created specifically for MKII. I gave Ed a bunch of random color palettes for the ninjas and he snuck Noob Saibot into the game entirely on his own. I added fiction and history to the character later, but Ed was responsible for the inception.

Craddock: MKII's backgrounds and characters are gorgeous—in a bloody yet colorful sort of way. Its art direction still holds up today. What visual direction were you aiming for? And, how did you want the game to differ from MK1's visual style?

Tobias: The first MK had a very raw, digitized look. That choice was made in part because of time constraints, but it was also an aesthetic choice we felt would give MK a unique visual style amongst its competitors.

On MKII, with the introduction of the Outworld, we saw an opportunity to create more richly colored visuals. We did coordinate the colors of our characters in contrast to the backgrounds so that they wouldn't get lost. Characters were typically composed of flesh tones and a primary color or two, which let us cut loose on the environment visuals. I think that in combination with improvements in how we captured footage of the actors added up to what gave MKII its unique visual approach.

Craddock: How often did you get to see updates to the console versions of MKII while they were in development?

Tobias: I remember our level of involvement with the MKII home ports being similar to the first game. Again, we provided feedback less often at the beginning and then more often toward the end. I remember that maybe we were more critical throughout the process only because we felt the need to protect the property.

Tobias: I don't know if that comment would've happened the first time we played it, but certainly by the end of development I remember thinking they did a fantastic job with MKII. We were very happy with the SNES version, and so if they received a fax from our team, it was either me or Ed who sent it.

Craddock: MKII's home release came 18 months after its debut in arcades. That seems like an exceptionally long time between arcade and console releases. Do you know if there as any particular reason for that on Midway's side?

Tobias: I don't remember why that would've been other than maybe having to do with the release of the arcade game. I think the coin-op was officially released in the spring time and so it's possible that the port would not have been ready in time for that holiday season.

Also, that would've only been several months from the arcade release, which would've upset arcade operators who were dependent on coin-drop. There was a feeling that the home release could affect their earnings and our relationship with the distributors and operators was very important.

Craddock: How soon after MKII released in arcades did you and the team break ground on MK3?

Tobias: I don't recall exactly. I know after we locked down software and began manufacturing the coin-ops I turned to creating the MKII comic book that we advertised in the arcade game. That was great fun for me and a good break from pushing pixels. Also, the team probably spent some time decompressing before we rolled on to MK3. But, we didn't float too long. It was business as usual for us. We had that blue collar Chicago work ethic engrained in our souls.

Craddock: Ed Boon says Scorpion is his favorite character. Who's your favorite?

Tobias: I love all my children!

Craddock: I love the speed and gameplay of MK3, but I've always been curious why its violence was even more over-the-top. For instance, a single character would explode and shower the screen with multiple skulls, rib cages, and more than four limbs. Fatalities were more over-the-top, too, such as Jax growing into a giant and stepping on his opponent. Why was this more cartoonish style chosen?

Tobias: Because bigger is better! Honestly, I don't know that we were [cartoonish] on purpose as much as just wanted to be more over the top with the violent aspect.

Craddock: Arcade and console hardware seemed to exist in a symbiotic relationship: Conversions of coin-op games gave consumers reason to spend money on a game once and play it at home, but arcade games were graphically superior to consoles, and boasted unique apparatuses such as cockpits and huge screens, giving console owners reason to venture back into arcades. Was this relationship as symbiotic as it seemed?

Tobias: Actually, in my experience it was quite the opposite. For me it was the unique peripherals that made arcade games special. It was the seat and steering wheel of a driving game or the actual molded gun of a shooting game. For fighting games the pads of home consoles were inferior to the feel of an actual joystick and mounted buttons. I think that's true to this day.

But, in the late ;90s and early 2000s when the graphic quality of the consoles caught up with what we could do in the arcade, that's when players began to stay home. Today the arcade experience has kind of had a resurgence. Not so much with the barcade retro scene as much as the new location-based event games you find in places like Dave & Busters.

Craddock: I've learned a lot about the obstacles console and PC programmers faced in bringing arcade experiences into the living room. Pac-Man for the Atari 2600, for example, was incapable of rendering circular dots—at least at the time Tod Frye worked on the conversion—and TV screens were wider than they were long, forcing Frye to rejigger Pac-Man's maze. Frye's conversion was judged harshly, and was considered partially responsible for the North American video game market's crash in the '80s. Do you feel conversions like Pac-Man and programmers like Frye were judged too harshly then or now, given that consumers—and most critics—couldn't understand the restraints that developers charged with home conversions had to work within? Or should that not matter?

Tobias: It's funny you mention the 2600 Pac Man game because I remember being bent as a kid that it differed so wildly from the arcade version. I remember flipping through the manual and reading the dots described as wafers to kind of explain away the square shape. My view on that changed when I began actually working on games and understanding how hardware limitations can put a pretty low ceiling over your head.

For what it's worth, I loved every game I played on our 2600, even the bad ones! That was a magic time for me. Even the crash was magical for me because the games were discounted to $2 or $3 bucks!

Craddock: Do you keep up with MK? What are your thoughts on the franchise?

Tobias: Yes I keep up when I can. I visit NetherRealm on occasion and the guys will share work-in-progress. They're kind enough to send games to me when they're released and I'll typically play through the single player modes. I really only started playing again at MK9 and I think the new versions are amazing. I'm always excited to see what they'll do next and the graphic capabilities are incredible. Honestly, I'm in heaven when I see how cool the original characters are interpreted in the new games.

I think MK is a forever franchise. I felt that way when I left Midway and I feel that way today especially with Warner Brothers' acquisition of the property. Like any franchise it may have ups and downs, but it is engrained in popular culture because of its birth in the 90's and will remain a staple as longs as it's dusted off and kept polished. Its relevance today is entirely due to the great work being done at NetherRealm.

Craddock: Of all the MK games you worked on, which is your favorite?

Tobias: For nostalgic purposes I'd say MK1 was my favorite only because we were so innocent and had no idea of the success that was ahead of us. That's a very rare experience for anyone who embarks on a creative endeavor. It was just us. No one told us what to do or how to do it. We had absolute creative freedom.