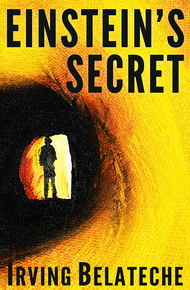 Irving Belateche is an award-winning author, a screenwriter, and a professor at the USC School of Cinematic Arts. He's written screenplays for Paramount Pictures, Sony Pictures, Warner Bros., and other studios, as well as for TV networks HBO and SyFy. He's the author of the bestselling novels Einstein's Secret and The Origin of Dracula. Mr. Belateche lives in Los Angeles with his wife and three cats.

It's 1955, and Albert Einstein lies in a hospital bed, deathly ill. He suddenly stirs, asks his assistant for paper and pen, then scribbles something down. Minutes later, he dies.

History tells us that Einstein jotted down equations that night. But struggling scholar Jacob Morgan believes that history is wrong.

He's convinced that Einstein wrote a deathbed confession that night—a secret that the great scientist didn't want to take to his grave.

Jacob has spent his entire adult life obsessively hunting down that secret—with nothing to show for it but the scorn of his colleagues and the tattered remnants of a once-promising teaching career.

But now, thanks to a lucky break, Jacob has a chance to get his life back on track. His appointment as an adjunct professor at the University of Virginia is a fresh start, and he's vowed to end his pursuit of Einstein's secret.

Until history chooses this moment to deliver him one more clue. A clue that leads him to an impossible and unbelievable discovery:

And so begins the last leg of Jacob's desperate quest, one where history is not only changeable—it's changing. All by itself. And if Jacob doesn't rescue Einstein's secret, everything that he's ever known will disappear forever.

The central mystery eponymously referenced in the title of Irving Belanche's thrilling novel hooked its claws into me and kept me turning pages looking for answers. A very fun, well executed concept. – Alec Hutson

In the late 1940s, Albert Einstein, the man who singlehandedly transformed the way we understand our universe, was well into his sixties, but his health was declining. He suffered from severe stomach pain and anemia.

In December 1948, his pain became so unbearable that he checked into Brooklyn Jewish Hospital in New York. There, doctors immediately rushed him into exploratory surgery and discovered that he'd had an aortic aneurysm. To stop the aneurysm from rupturing, they used a revolutionary technique. They wrapped his heart in cellophane.

That technique extended Einstein's life. But from that day on, the celebrated scientist knew he was living on borrowed time. To most of his acquaintances, he appeared to be fine. He continued to play the role of reluctant celebrity, a role he'd come to accept, lending his name and reputation to a few high-profile causes dear to his failing heart, and he continued to spend the bulk of his time working through thousands of equations, trying to discover the unified field theory, the theory that still eluded him.

But starting in late 1954, some of his close friends noticed that Einstein's demeanor had changed. The once buoyant professor was now more somber, as if something had started to weigh heavily on him, and they suspected that this something was more than his mortality.

Some of his friends suggested that it was his growing frustration at not yet having discovered the unified field theory. Others suggested it was something more pressing, perhaps a flaw he'd found in one of his established theories. And a few believed that he'd discovered something significant and that he wanted to share it with the world, but for some reason was reluctant to do so.

On the morning of April 13, 1955, seven years after doctors had wrapped Einstein's heart in cellophane, Einstein didn't leave for his office at the Institute for Advanced Studies at Princeton University. He was feeling sick, so he stayed home.

That afternoon, his long-time assistant, Ruth Meyer, heard him collapse in the bathroom. She called his doctor, who rushed over and gave him morphine. Einstein went to sleep, but it was clear to the doctor that Einstein's aneurysm had started to rupture.

The next day, a group of doctors arrived at Einstein's house and examined him. They recommended surgery and also told him that the aorta was probably too far gone to be salvaged. So Einstein refused the surgery, saying, "I want to go when I want. It is tasteless to prolong life artificially. I have done my share, it is time to go. I will do it elegantly."

If Einstein's wishes had been followed, I would've never discovered that the world's most famous scientist had a secret. He would've died at home and taken his secret with him.

But his wishes weren't followed.

The next morning, Ruth Meyer found him in severe pain and decided to call an ambulance. The ambulance arrived promptly, and Einstein was rushed to Princeton Hospital. At the hospital, he stabilized, and a couple of days later, on April 17, he said he felt well enough to write. He asked for paper and pencil, worked on some equations, then fell asleep.

Late that night, at 1:18 a.m., he awoke, spoke a few words in German, and died. Mrs. Ander, the nurse on duty at the time, didn't know German, so she didn't understand his last words.

History recorded that the last message from Einstein to the world, the last message that we could understand, was those pages he'd written, filled with equations. And I, like everyone else who'd studied Einstein's life, accepted history's judgment.

Until I came across a long-lost quote in a newspaper.

In the immediate aftermath of Einstein's death, many newspapers and magazines published articles about his last few days. He'd died at Princeton Hospital, so the local New Jersey papers also solicited quotes from the doctors and nurses who'd attended to the scientist.

Those papers all carried the same quote from Nurse Ander, the last person to see Einstein alive. They quoted her as saying that Einstein spoke a few words of German right before he passed away. Her quote was why this fact was so persistent in all that's been written about Einstein's death.

But one newspaper carried more of her quote.

The Trenton Evening Times also quoted her as saying that those words of German might've been the same words he'd written down a little earlier in the night. This quote was my gateway into Einstein's secret.

Nurse Ander was saying that Einstein hadn't written just equations on that final day, as history had recorded. He'd also written words. Words that I believed preserved a secret. Einstein had been hiding something from the world during the last year of his life, and he'd finally shared it on his deathbed. He'd confessed his secret rather than taking it with him to his grave, where it would have been forever buried.

And I was so sure of this, that I'd devoted the last twelve years of my life to uncovering that secret.