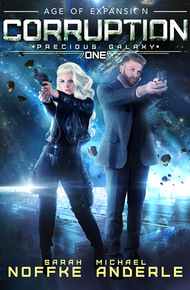 Michael Anderle (ok, weird talking about myself in the 3rd person) (1967-Hopefully a long time from NOW) was born in Houston, Tx. A very curious child, he got into trouble - a lot. What to do with an inquisitive mind when he was grounded? Read!   Ok, done with all of that 3rd person stuff.  In the first 20 years, I mostly read Science Fiction and Fantasy. In the last 10 years I have enjoyed Urban Fantasy and Military Fiction. With this background, I've been blessed with creating The Kurtherian Gambit series, a well-selling, and fan loved, collection of stories.  The fans have propelled these stories beyond my wildest imagination and they should get all of the credit for sharing with friends, family and occasionally the random person on the street. They are fantastic!

Sarah Noffke, an Amazon Best Seller, writes YA and NA science fiction, fantasy, paranormal and urban fantasy. In addition to being an author, she is a mother, podcaster and professor. Noffke holds a Masters of Management and teaches college business/writing courses. Most of her students have no idea that she toils away her hours crafting fictional characters. Noffke's books are top rated and best-sellers on Amazon. Currently, she has fifty novels published. Her books are available in paperback, audio and in Spanish, Portuguese and Italian.

A new evil lurks in the darkness.

After an explosion, the crew of a battlecruiser mysteriously disappears.

Bailey and Lewis, complete strangers, find themselves suddenly onboard the damaged ship. Lewis hasn't worked a case in years, not since the final one broke his spirit and his bank account. The last thing Bailey remembers is preparing to take down a fugitive on Onyx Station.

Mysteries are harder to solve when there's no evidence left behind.

Bailey and Lewis don't know how they got onboard Ricky Bobby or why. However, they quickly learn that whatever was responsible for the explosion and disappearance of the crew is still on the ship.

Monsters are real and what this one can do changes everything.

The new team bands together to discover what happened and how to fight the monster lurking in the bottom of the battlecruiser.

Will they find the missing crew? Or will the monster end them all?

Experience this exciting mystery sci-fi saga and the latest addition to the expanded Kurtherian Gambit Universe. If you're a fan of Dark Matter, Alter Carbon, or Star Wars, you'll love this riveting new space opera.

Lights flickered overhead as the howling siren blared louder. The battlecruiser had passed through a strange mist that had set off the alarms. The vapor hadn't appeared to be anything out of the ordinary, or thrown up any cautions from the navigation crew.

"What the hell is going on?" Commander Julianna Fregin demanded, staring wide-eyed at the radar.

"It appears to be a storm of sorts," Ricky Bobby, the ship's AI, stated overhead. "I've encountered these before, and they usually pass without incident. I hypothesize that it's blocking sensors, which is what triggered the alarms."

"So we have no reason to distrust the individuals from Phoenix Tech?" Captain Eddie Teach asked, referring to the ship they were scheduled to meet.

"I think that your level of trust with these representatives should be a separate consideration from any weather patterns you experience before the meeting," Ricky Bobby said, that familiar clinical tone to his voice.

Eddie shook his head at Julianna. "Has he always been so pedantic?"

"Always," she yelled as the sirens shut off, her voice loud in the sudden quiet.

Everyone on the bridge looked up, briefly distracted, then the crew took a collective deep breath, as the rush triggered by the emergency sirens died away.

"Can I get a systems update?" Julianna asked, hands pressed behind her back, and gaze eagerly pinned on the radar.

The good news didn't put Julianna at ease. Instead her eyes swiveled back and forth as she watched their battlecruiser near the Phoenix Tech ship.

"Relax, Jules," Eddie encouraged. "Everything is going according to plan. This is a straightforward meeting. No funny business."

She dropped her gaze, not looking convinced. "Ricky Bobby, does your scan include the defense network?"

"Currently, I'm halfway through checking the engines," Ricky Bobby informed her. "A full scan of the defense network will take a little while, but I'll prioritize it next."

She shook her head. "I don't know, but something doesn't feel right."

"Aren't you the one who says this isn't a 'feeling' business?" Eddie teased, a sideways smile on his long face.

Julianna nodded absentmindedly. "It's just that there's something we're missing, or so it seems."

"The shields do appear to have intermittent failure," Ricky Bobby informed them.

Julianna cut her eyes at Eddie, a heavy expression on her face.

"What's going on with them?" Eddie asked.

"I'm not certain," Ricky Bobby said. "I'll have to have Liesel check them out manually."

Liesel, the ship's engineer, was currently off the ship, which meant that the shields would have to wait. Julianna shook her head again, trying to dispel the worry.

"We're receiving a communication from the Phoenix Tech ship," one of the comms officers stated, gaining the attention of the other crew members.

"Patch them through," Eddie requested, mimicking Julianna's stance and standing at attention.

"Ghost Squadron, this is Mariah Riley with Phoenix Tech," a bodiless voice said overhead. "We're requesting permission to dock and board."

The shuttle was nearing Ricky Bobby's port side at an even pace.

"Phoenix Tech, we're experiencing some technical difficulties at the moment," Julianna stated, staring straight at Eddie. He nodded, sensing what she was thinking.

A loud sigh fell over the speaker. "Good, I'm glad it wasn't just our shuttle," Mariah said. "Alarms went berserk when we flew through that mist, and now our shields are down, and all our weapons disabled."

Julianna purposely walked over to the communications officer who'd patched through the call, and pressed a button on the workstation, pausing the line. "Ricky Bobby, how are our weapons?"

"They are all online. The shields are still down, but only sporadically," Ricky Bobby answered.

Julianna gave Eddie a long look and then nodded, seeming to have read his mind. She switched back on the transmission. "Phoenix Tech, you've been granted permission to dock and board."

"Great, thanks," Mariah said, relief in her voice. "See you soon."

Eddie smiled wide, trying to disarm her. He waved a large hand at her, dismissing the skeptical expression on her face. "It's probably some dense fog that throws off the gyroscope sensors in charge of regulating the vapor pressure connected with the shields."

She gave him a long, cold stare. "You made all that up."

"When Liesel returns from checking the shields, I'm having her school you on ship technology," Julianna said, seeming to let go of some of her tension. She watched as the Phoenix Tech ship neared their battlecruiser, the visitors dwarfed by the cruiser's gigantic size.

"Do you think they're going to talk?" Julianna asked.

"I think having allies in this big, lonesome galaxy is incredibly important, and I don't know of any better friends than us," Eddie stated proudly.

The ship lurched, knocking both the captain and commander forward.

Julianna stumbled, hitting her head on the edge of the strategy table in the center of the bridge. "What's going on?" she asked.

"We've hit another pocket of the fog," Ricky Bobby stated. "I'm working on classifying the weather pattern and taking a sample to scan for pollutants."

The overhead lights flickered twice before shutting off completely, sending the bridge into complete darkness. The sirens blared once more, the red emergency lights strobing.

Eddie's eyes darted up to the radar. The Phoenix Tech shuttle had docked with their ship. "Lockdown the corridor our visitors are in."

Behind them, the crew worked in the darkened area, scrambling to get the systems back online.

"Ricky Bobby, did you hear me?" Eddie asked.

"Ricky Bobby, we need a systems report," Julianna stated, running her hand over her forehead. She pulled her hand away and realized it was streaked with blood. In the reddish glow of the bridge, she gave Eddie a look of alarm.

"Are you all right?" he asked, realizing she'd been hurt.

"I'm fine!" she yelled, her eyes going wide, as black smoke seeped up from the floor. "But what's that?"

Eddie encouraged her back with one arm, shaking his head. "Ricky Bobby! Do you read me? What's going on?"

The black vapor blanketed the entire bridge. No one coughed or tried to flee as the gaseous substance engulfed them; instead, they remained transfixed on the tendrils of smoke stretching through the air.

A moment later, the sirens stopped. The emergency lights faded, once again casting the bridge in total blackness. When the lights flickered back on, not a single crew member remained. The bridge was empty.

"Captain? Commander?" Ricky Bobby called overhead. "Something took me offline. The ship's system has been compromised."

"Captain? Commander?" Ricky Bobby asked again. "Is anyone there?"