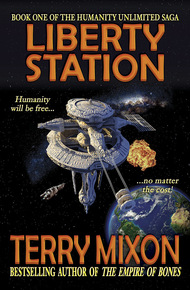 He now writes full time while living in Texas with his lovely wife and a pounce of cats.

Harry Rogers uses his military training to rescue the innocent. His domineering and powerful father uses that to lure him to the jungles of Guatemala.

Harry thought the mission only meant rescuing a beautiful scientist at a Mayan pyramid. Wrong.

What they find puts them in a deadly race against his diabolical family. The first to solve the thousand-year-old mystery gets a ticket to the stars.

Jess tried to keep her mind off the heavily armed man beside her, but it wasn't easy. How did she know he was really who he said he was? This could all be a trick. He might have been partners with the man that had killed Abel.

Yet, what choice did she have? The tunnel was gone. Hell. That by itself argued in his favor. What kind of idiot collapsed a ruin on himself to build a cover?

She was inclined to believe his story, simply because she could see the familial relationship between him and her boss. Admittedly, Harry was a taller and more ruggedly handsome version of his father. On any other day, his wide shoulders and hard body would warrant a closer look. Today, she just hoped they survived.

Reality dashed her optimism as soon as she grabbed the flashlight and took a good look at the area on the other side of the wall. It looked like some kind of tomb. One without another exit.

Jess's knowledge of Mayan burial chambers was sketchy at best, but this one looked important. Effigy figurines, polychrome pottery, masks, and mushroom figures packed the chamber. Other works of art, carved of jade and marble, sat around the chamber. She could also see a sarcophagus in the back.

"Do you see a way out?" the man asked. Harry Rogers. The man who'd renounced his own father.

"Then we need to find another way clear."

She turned and gave him a look. "The way I see it, we have three options. We dig out the tunnel and hope it doesn't bury us, we go down the well, or we die. We can look in here and maybe we get lucky. If not, our best chance is the well."

He stared at it. "I don't have any breathing gear. We'll end up wet and dead."

"Maybe not. Abel seemed to think it's connected with the courtyard."

"Which way is that? If we go the wrong way, it will be just as deadly."

She pointed into the burial chamber. "That's a clue. I did some reading on the trip down here. The Mayans buried their dead facing either north or west. The pyramid is north of the courtyard. If you don't have a compass, we can make an educated guess and head toward the bottom of the sarcophagus."

He pulled an object off his belt. A compass. "The chamber is facing north-south. So we can try south. Come on."

"I'm not leaving without taking a few pictures. This site might be lost forever. Surely you can spare ten minutes."

By his expression, he didn't think so. She short-circuited his options and ducked through the opening. It was just wide enough for her, so he couldn't get in.

"We don't have time for this." His tone told her he wasn't used to other people arguing with him. Too bad.

She had to get what pictures she could. The art meant they'd buried someone special or unusual here. Perhaps a great astronomer. If she didn't document the site, Abel would never get the credit he deserved, and she couldn't tolerate that.

"I suggest you look for a good spot to tie off the rope while I take pictures. Please tell me you have a rope."

"Christ. How sturdy does that stone box look?"

She aimed her light at the sarcophagus. "It's stout. We can run a line around it. It should support our weight."

"Then take your pictures fast. The chances of the pyramid coming down on top of us increases every minute."

Jess stuck the flashlight into her pocket so that it illuminated the ceiling. She took pictures from the entrance, catching every angle to the room. Every time her flash strobed, she saw the glitter of gems and gold.

She wanted to get the layout before she tried to walk through the funerary offerings. She bent to get the statues and carvings in as much detail as she could. There were too many pieces and too little time to do them justice, but she tried to get a sampling.

Jess took some of the smaller pieces and slipped them into her pack. It was supposed to be waterproof, so she hoped everything made it through undamaged. Including her camera, which the manufacturer also claimed was waterproof.

Mayan carvings covered the stone slab lying across the top of the sarcophagus. The edges had markings that probably said something about the deceased. The top had more around the sides, but the central area was a scene. Well, a scene mixed with all kinds of ritual details.

A man seemed poised to leap off the top of a pyramid. Other men stood nearby, mostly kneeling. They all had the same kind of appearance with long hair and fairly primitive clothing.

The man in the center had some kind of harness over his bare chest, short hair, and an expression of beatific happiness. His arms were spread as though he were about to take flight.

She snapped pictures from every angle. It was magnificent.

"You about done in there? We really need to hit the road."

"This place could come crashing down any second. The rocks and dirt are shifting."

She set her camera down on top of the sarcophagus. "I'm almost ready. Just one more thing to look at."

The heavy stone slid a few centimeters when she shoved it. Jess put her back into it, and it opened almost a foot at the head. Time to grab a picture of the man of the hour.

What she saw inside froze her in place. The dried human husk was expected. His clothing was not. It wasn't primitive at all. It looked similar to the woven shirts men wore today. It had buttons. And what certainly looked like a name tag, though the lettering was unfamiliar to her.

"Harry," she said softly. "You need to come in here and help me right now."

He peered through the opening. "You look fine. Come on out."

Jess shook her head. "No, there's something really strange in the sarcophagus. A man with strange clothes. Modern clothes."

He looked suitably doubtful. "In a secret room at the bottom of a previously undiscovered Mayan pyramid? I read that book a few years ago. Pure fiction."

She stepped back to the opening and handed him her camera. "Then what is that?"

Harry stared at the image on the screen. "Is this some kind of joke?"

"Do I look like I'm laughing? Get in here and help me."

He hesitated a moment, cursed, and handed the camera back to her. "I sure as hell hope we don't live to regret this. Or not live at all."

The two of them widened the opening in just a few minutes. He took off his pack and forced himself through, leaving it beside the entrance.

He stepped carefully through the priceless art on the floor and played his flashlight into the sarcophagus. "Holy shit. It really is someone in modern clothes. Sort of."

She grabbed his hand when he started to reach into the sarcophagus. "Wait. It might look intact, but it'll probably turn to powder if you touch it. Help me move the lid aside so we can see the entire interior. If we can keep from breaking the lid, we might be able to cover him back up. They might be able to recover him later."

They managed to get the lid off and leaned it against the side of the sarcophagus, revealing the corpse completely. He looked as dried out as an Egyptian mummy. His clothes seemed mostly intact and looked far too modern to be possible.

Jess started snapping pictures. His shirt was light in color. Perhaps it had once been white or tan. The name tag was over his right breast pocket. A real pocket. The letters didn't look at all familiar. The shirt had buttons that looked like some kind of plastic.

"How long has he been down here?" Harry asked. "The Mayans have been gone a long time, right?"

"Abel was sure this place was late classical, so AD 700 to 900. This site has been abandoned for over a thousand years."

"Then where the hell did this yahoo come from?"

"I'm an orbital engineer, not an archaeologist. Or a science fiction author. Actually, this kind of seems more like a Dane Maddock adventure. If we survive, you can write a letter to David Wood and ask him how he'd set up this kind of story. I'd love to hear what Bones has to say about it."

The dead man's pants were more like shorts. Jess checked the fly, which caused the fabric to powder. It used buttons too. She pocketed the one that came off in her hand. He wore low-slung shoes that didn't use laces. They looked like leather. A satchel sat just below his feet.

Harry looked at the man's shirt closely. "He has a patch of some kind on his shoulder."

It was too tight for her to see any details. His shoulder was only a few centimeters from the side of the sarcophagus. She put her camera into the space and took half a dozen pictures, changing the point of aim slightly each time.

"Are we about done?" Harry asked. "The hair on the back of my neck is standing up. Something's about to go down."

She prayed, opened her backpack wide, and slid the satchel into it. The thing came apart, but the contents were inside. She tossed her camera in, cinched the pack tight, and strapped it onto her back. "Ready. Let's get the lid back in place, get the rope tied off, and get out of here."

It took all her strength to lift her end, but they got the lid back in place. She sighed. They'd done it.

That's when a sharp shock sent dirt flying off the walls and made the ceiling groan.

She slid through the opening and watched the ceiling with growing horror. There were cracks, and they were growing. "Do you have the rope ready?"

He snatched up his pack and rifle, grabbed her in his arms, and hopped over the lip of the well.

She screamed as they fell into the darkness. The fall seemed to last an eternity, but it couldn't have been more than a few seconds. They slammed into the water, and the force of the impact tore her from his arms.