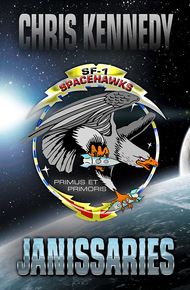 A Webster Award winner and three-time Dragon Award finalist, Chris Kennedy is a Science Fiction/Fantasy author, speaker, and small-press publisher who has written over 40 books and published more than 400 others. Get his free book, "Shattered Crucible," at his website, https://chriskennedypublishing.com.

Called "fantastic" and "a great speaker," he has coached hundreds of beginning authors and budding novelists on how to self-publish their stories at a variety of conferences, conventions, and writing guild presentations. He is the author of the award-winning #1 bestseller, "Self-Publishing for Profit: How to Get Your Book Out of Your Head and Into the Stores."

Chris lives in Coinjock, North Carolina, with his wife, and is the holder of a doctorate in educational leadership and master's degrees in both business and public administration. Follow Chris on Facebook at https://www.facebook.com/ckpublishing/.

The war with China was over and Lieutenant Shawn 'Calvin' Hobbs just wanted his life to get back to normal. The hero of the war, he had a small ream of paperwork to fill out, a deployment with his Navy F-18 squadron to prepare for, and a new girlfriend to spend some quality time with. Life was good. Until the aliens showed up.

They had a ship and needed to get to their home planet, but didn't have a crew. They had seen Calvin's unit in action, though, and knew it was the right one for the job. There was just one small problem—a second race of aliens was coming, which would end all life on Earth. Calvin's platoon might want to do something about that, too.

Having won a terrestrial war with 30 troops, winning an interstellar war with nothing but a 3,000 year old cruiser should be easy, right? "Janissaries" initiates "The Theogony," a trilogy that will take Lieutenant Hobbs and his Special Forces platoon to the stars. It will also show them that there's much more to Earth's history than is written in the history books!

•I first met Chris Kennedy at the 20BooksTo50K conference in Las Vegas last year and knew right away that I wanted to work with him. Our tables were side by side at the Author Signing Event, so I got a good look at the books his company publishes and got to talk to him about his past and future career. Even then, plans were forming in my mind to recruit him for this StoryBundle, joining his action-packed work with that of other top talents to make the ultimate bundle of the indie publishing era. – Robert Jeschonek

"Vipers are approaching the fourth planet," said the operations officer. The sporadic power spikes had continued for several hours, but due to the random nature of the source, Arges hadn't been able to triangulate it. It was coming from the direction of the fourth planet or its small moon, but he was unable to determine which. Arges had asked Captain Deutch to launch a couple of Vipers with sensor gear; the next time the power source activated, he would be able to triangulate it.

"Very well," said Captain Deutch. Looking at the helmsman, he asked, "Our position?"

"We are holding at 125 million miles from Planet Four, as ordered," replied the helmsman.

"Vella Gulf, this is Viper 02," radioed Lieutenant Steve 'Gecko' Smith, the Weapons System Officer for the flight. "We are approaching the planet, but do not see anything abnormal yet. We are not picking up any energy readings at this time." At that distance, radio waves would have taken over 11 minutes to make the journey from the fighter to the Vella Gulf. With the Psiclopes' faster-than-light communications system, it was almost instantaneous.

"I'm starting to pick up readings of large concentrations of metal on the other side of the moon. The metal appears to be processed. We're coming over the horizon where we ought to be able to see it. There is enough...Wait! I've got radars tracking us!...VAMPIRE, VAMPIRE, MISSILES INBOUND!" Gecko screamed.

"Missile launch from the moon of the fourth planet!" called the defensive systems officer from the Security position. "Six missiles launched...five are tracking Viper 02, and one is locked on Viper 03..."

"Break right!" yelled Gecko as he released two decoys. He looked at his display. "What the fuck did we do to you?" he muttered as five of the six missiles turned to guide on him. He smiled as one of them attacked the thermal flare that he had released. The missile detonated, and the blast destroyed the flare...and one of the other missiles that were tracking them.

The pilot of Viper 02, Flight Lieutenant Ken 'MOSA' Smith, had the throttles of the little ship at maximum and was flying as straight away from the missiles as possible. Any maneuvering only let them catch up with him more quickly and shortened the time that Gecko had to defeat them. He jettisoned the four missiles the ship was carrying to get rid of the unnecessary mass and saw that he was now accelerating at 655 G's, which was 5 G's higher than what the fighter was rated for. MOSA hoped that the missiles tracking him would run into the ones that he dumped, but that wish went unanswered. Space was just too big.

"Three missiles still tracking us," said Gecko with tension in his voice. Even though the fighter was accelerating at over 650 G's, the missiles were accelerating at over 100,000 G's, and they were catching up fast. He put the defensive laser on automatic, and it began trying to target the missiles that were rapidly overhauling them. "Break left!" Gecko yelled as he fired out another round of decoys.

MOSA turned the ship hard left and was rewarded with one of the remaining missiles changing its targeting to the decoy. The other two kept coming.

Before Gecko could say "Eight!" the fighter's laser hit the missile that was closest to them, and the missile exploded. The fighter's sensors were unable to track the remaining missile, and Gecko momentarily hoped that it had been caught in the explosion.

But it hadn't, and as the sensors cleared, Gecko saw that it was almost on them. The laser began firing again.

"GLUCK AB!" Gecko transmitted as the missile closed on them.

"Viper 02 has been destroyed," said Steropes as the sensors on Viper 03 detected the 25 megaton nuclear explosion. He had taken over for Arges, who had become very pale at the beginning of hostilities. "I do not think there will be any survivors."

"We've got a missile headed toward us," said Bullseye, the WSO of Viper 03. He launched a spread of decoys. "Break right!" he called, and Viper 03's pilot, LT Carl 'Guns' Simpson, turned the fighter hard to the right.

The missile neither followed them, nor did it attack the decoys. It continued in the direction that it had originally been heading, away from where the Vella Gulf lay waiting, as it continued to accelerate at over 120,000 G's. "Where the hell is it going?" asked Guns.

"No freakin' clue," replied Bullseye, "but wherever it's going, it's getting there fast." He watched the missile's trajectory for a second. "Hey Guns," he said, "let's go follow it and see where it's going."

Guns turned the fighter onto the vector of the outbound missile. After about 30 seconds more, Bullseye was unable to track it any longer as its motor went out. Guns started calculating the amount of fuel that he had left. "Umm...how much longer do you want to follow it? We're getting kind of low on fuel..."

"Not much further..." he stopped as his sensor registered a gate activating. As fast as the missile was going when it hit the gate, the activation was significant, and Bullseye was easily able to pinpoint the position of the gate. "OK, we're good," he continued. "I figured it was headed for a gate, and I wanted to get the position of it. Let's get back to the ranch before something ugly comes through it."

"You don't have to tell me twice!" agreed Guns as he turned the fighter back toward the Vella Gulf.