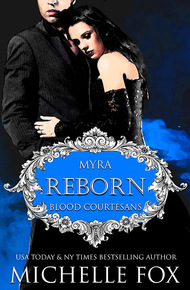 USA Today and NY Times bestselling author Michelle Fox lives in the Midwest with her husband, teen, and two labs who steal her socks and all the space on the couch. She believes in magic, which makes writing paranormal romance and urban fantasy a natural fit. Aside from writing, she runs the Wolf Pack Reads group on Facebook, a large, active community for readers and she does a lot of cooperative marketing work with authors. In her spare time, she and her husband work to remodel their 1860 farmhouse.

I have to sell myself to the vampires. I know it's not safe, but there's no other option. Not for the amount of money I need. It's either become a blood courtesan or watch my mom die while we lose the only home I've ever known.

So I leap before I look and soon I'm sharing a bed with vampire Kristos Anastos. He's hot, rich and his fangs hurt so good. The courtesan thing is better than I thought it would be...until bullets start to fly.

Kristos believes he's the target, but it soon becomes clear it's not him they're after. It's me. And if I want to live, I'd better figure out why.

I thought I was just a college student, a good kid raised by a single mom down on her luck, but I have secrets even I don't know about.

Blood is money and mine may be worth the most of all.

I was so out of my league, I was on another planet.

I'd never met a vampire, but I knew some things about them: Vampires liked blushing, and there was some kind of alcohol connection. Oh, and I was about to allow them to suck my blood during....well, you know. That was already too much information.

Fear of the unknown overwhelmed me, and by the time the limo dropped me off at a swanky restaurant named Taos, I was about ready to bolt. I never had the chance though, because a cadre of muscle-bound guards swarmed me, their expressions grim. It was early fall and still warm, but a chill went through me.

This was the point of no return. There was no going back. I hugged myself, wishing I'd thought to ask for a wrap.

"Miss Danson?" asked a blond man with a buzz cut and a broken-one-time-too-many nose. Sunglasses hid his eyes and his black suit was identical to the rest of his group.

At my nod, the men closed rank around me and hustled me toward my fate. One of them even shoved me along when I paused to pull the hem of my dress off my heel.

"Is that really necessary?" I stumbled. The gown was just a little too long or my heels were just a little too short. Either way, the result was the same; the mere act of walking was complicated. Worse, a game of crotch peek-a-boo threatened to break out at any second and I had to pay close attention to how I moved in order to keep the goods under wraps.

"Well, can we go a little slower? I'm wearing heels you know." I bit my lip when my voice came out sharper than I'd intended. Way to make friends, Myra.

The security detail slowed for about two seconds, and then whisked me through the entrance and into the dining room. The restaurant was dimly lit with candles on every table and had a Zen-like minimalist decor in a mix of beige and black tones. A tuxedo clad maître d' stood behind a marble-topped bar at the entrance. He glanced up as we crossed the threshold.

In fact, judging from the abrupt silence, everyone noticed my arrival. How could they miss it? I was a woman in a very fancy dress surrounded by what looked like a Navy Seal special ops team.

The guards were undeterred by all the attention and kept moving. I straightened my spine and forced my stride to be confident as we made our way through the dining room.

Hoping to spot Kristos before he saw me, I scanned the people seated at the tables. I wanted to give myself some time to prepare mentally.

Taos was full of couples and double dates. Everyone appeared to be matched with a partner. Aside from curious stares and speculative gawking, no one seemed to be looking for me specifically.

By then the security detail had sped up again, herding me through the restaurant like an errant lamb. I struggled not to trip as my dress twined around my legs and under my heels. Stupid thigh slit.

"There he is. Nine o'clock," said one of the guards.

I turned to look and saw him.

Kristos the vampire took my breath away.

In a room full of noise and movement, he was motionless. His absolute stillness made him stand out in sharp relief, timeless as ancient statue. I studied his features, noting the hooked nose and square jaw. His shoulders were broad and his suit followed the trim muscle of his physique. As far as I knew it was the first time I'd ever seen a vampire up close and personal, and he was much better looking than I had anticipated.

For some unknown reason, I was instantly attracted to him, and the moment I had that insight he moved, turning his head to focus on me. For a long second, everything and everyone around me ceased to exist, it was just me and Kristos.

My pulse quickened and my breathing came fast. I felt like I was falling into his gaze, as if his eyes were swallowing me whole and then....and then I was on the floor, my dress finally bringing me down.

With a loud 'oof' I slammed to the ground, trying to land on my side to avoid face planting. The momentum rolled me onto my back, whipping my legs apart, which displayed my lack of underwear for all to see.

There was a moment of silence before a sonic wave of gasps and titters crashed down on me, bringing my humiliation to the fore. The security guys just stood there, apparently just as shocked as everyone else that I had a real live v-jay under my dress.

Burning with mortification, I quickly pulled the gown over my naked bits and tried to stand up, but my heels caught in the hem again.

The guards still hadn't moved. Not one of them lifted a finger to help me. Useless bastard Navy Seal poseurs.

I crawled on my hands and knees, tired of fighting the dress and not wanting to see how many people were staring at me.

Kristos' table wasn't that far away and it was a large round with a long table cloth. My goal was to get under there and hide until I was dead and mummified beyond recognition.

People murmured as I passed their tables, but I ignored it, focusing with tunnel vision on just getting to Kristos' table without flashing anyone else.

Once I was there, I bolted into my hidey-hole, huddling with my knees pulled up to my chest and my skirt wrapped around me like a cocoon. Sniffing back tears, I squeezed my eyes closed and tried to pretend none of this was happening.

Oh, how far the fantasy supermodel version of me had fallen. Right into hell.

"Miss Danson?" Kristos ducked under the table to peer at me, curiosity gleaming in his eyes. Now that we were face-to-face I could see they were light aquamarine blue.

"After that entrance, I couldn't possibly leave you alone."