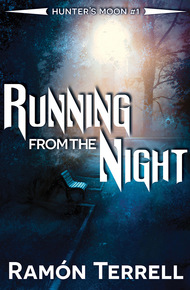 Ramón Terrell is an author and actor who instantly fell in love with fantasy the day he opened R. A. Salvatore's: The Crystal Shard. Years (and many devoured books) later he decided to put pen to paper for his first novel. After a bout with aching carpals, he decided to try the keyboard instead, and the words began to flow.

As an actor, he has appeared in the hit television shows Supernatural, iZombie, Arrow, and Minority Report, as well as the hit comedy web series Single and Dating in Vancouver. He also appears as one of Robin Hood's Merry Men in Once Upon a Time, as well as an Ark Guard on the hit TV show The 100. When not writing, or acting, he enjoys reading, video games, hiking, and long walks with his wife around Stanley Park in Vancouver BC.

Running from the Night by Ramón Terrell

Out for a nighttime jog around Vancouver's Stanley Park, Jelani witnesses what he thinks is a murder, but is far worse. A vampire feeding. Having seen what no human is allowed to witness, Jelani finds himself hunted by undead enforcers intent on killing not only him, but everyone he loves. With his life in shambles and monsters walking among humans, Jelani must use his wits and skill to save himself and his friends from a fate more terrible than death.

Stay away from me!" As soon as the words left Larry's dry mouth, they died in the thickness of the woods, his terror devoured by the darkness. "You can have my money; whatever you want!" he called over his shoulder as he turned and sprinted down another path. Though he'd come here more times than he could count, knew every path inside and outside the massive rainforest-like park, Larry could not elude his pursuers.

For years he'd taken walks through Stanley Park, turned down one path to the next in daylight and night. He knew these paths better than anyone he knew, and whether raining or clear, he would take his daily or nightly walks to clear his head and enjoy the fresh air.

But then these two men showed up right on the dirt path in front of him. It wasn't wholly unusual to encounter someone walking the paths late at night, but these two practically smelled of danger. He'd thought to take a turnoff that was fortunately closer to him than the two men and see if they followed him. Once they had, he'd quickened his pace until all three were running.

"Heh, heh, now what would you offer me that I can't just take from you, little man?" one of his pursuers, the smaller one, called out from behind.

Larry ran on, ignoring his burning legs and laboring lungs. Every path he took, they were there. Twice he'd jumped off the path and into the woods, thinking to slow them down. Both times he'd seen at least one of them actually in front of him and had to turn aside. How could anyone move that fast?

"Tell me," the other man said in an amused voice that didn't sound the least bit winded despite the fact that they were running uphill now. "How long do you think this guy can keep running before his little lungs give out?"

"Or his little legs turn to jelly and stop working?" the other replied, laughing.

Larry kept running. They didn't even sound tired! He turned right, heading toward Third Beach. If he could make it to the paved pathway that skirted the perimeter of the park, he might be okay. There were always people walking those paths.

"Uh, oh," one of the men called from behind in an amused voice. "Looks like he's trying to get out in the open." They might have been jogging behind him for all the effort they were expending.

"Well, we can't have that now, can we?" the other replied.

Larry lowered his head and sprinted as fast as his burning legs could take him. He darted into the woods again, jumping over fallen trees and through shrubs. His pursuers no longer spoke, but he still heard them running. He angled back toward the dirt path. He could hear the ocean now. Almost there! He made it out of the woods and back onto the path, now within sight of the paved sidewalk. A blur of movement flashed in front of him causing him to flinch away and slam into a tree.

The impact sent him spinning to the ground where he rolled in the rocky dirt, gritting his teeth against the pain. Dazed, he struggled to rise and fell again.

"Hey there, hey there! You alright?"

Larry craned his neck to look up at the speaker. His vision was a bit blurry from that hard impact with the tree, and the night didn't help either.

"Did you …" he shook his head carefully, struggling to rise again. "Did you see those men chasing me?"

"Careful, man. Don't try to get up too fast;. That was quite a fall. I'm surprised you weren't knocked out." Strong hands gently lifted him to his feet and held him steady.

Larry put a hand to his head to steady it. "Thanks. That really hurt." Finally his vision came into focus and he saw a man about his height looking back at him, concern in his eyes. In the scant moonlight that penetrated the trees, Larry saw that the man was wearing a jumpsuit, likely out for a night walk or jog like he had been. Fortune was on both their sides for running into each other like this, as the same fate could have befallen this guy as well.

"Man, am I glad to see you," Larry said, looking nervously over his shoulder at the vacant dirt path.

"Why is that?" the other man said, running a hand through his dusty blond hair. He smiled a crooked, questioning smile. "You didn't knock yourself out, so I think you would've been fine."

Of course, Larry knew that wasn't true. He'd have been robbed, beaten, or maybe killed. He glanced over his shoulder again. "Did you see two men chasing me?"

"Two men?" the other man repeated.

"I'm pretty sure he means us."

Larry's spun around in alarm.

Arms crossed and leaning against a redwood tree to the side of the dirt path, the larger man that had been chasing him smirked, turning toward the pair.

"Holy shit!" Larry said, backing away while looking for his second pursuer. "Man these guys are trouble, we've got to get away from here!" The big man chuckled, but remained where he was. Larry looked back to his left and saw that the blond guy was gone. He'd abandoned him! Cursing again, Larry continued to back away, then turned and almost ran into the blond guy, who was now behind him.

"What…?" he trailed off when he saw the smile on the other's face.

"Man, these guys're trouble!" The blond mocked. "We've gotta get away from here!"

The bigger man laughed and moved away from the tree. "You really should watch where you're going. You ran into me full force and went spinning over to my friend there." He indicated the blond behind Larry. "If I was as weak as you, I might've been hurt." He tsked, grinning.

Larry's head was whirling. How could that guy have gotten in front of him so fast? It wasn't possible. He turned nervously from one to the other, trying to decide which way he could run. Maybe he should try and take the blond guy down quick. He was the smaller of the two.

"Uh-oh," the bigger man said. "Judging from that desperate look, I'd say he's gonna try to take you down, Jake."

Larry looked from one to the other, then lashed out with a roundhouse punch at the blond man's jaw. The man caught his fist and squeezed, breaking Larry's hand. Larry cried out, but a hand went over his mouth, muffling his screams.

"Now, now," the man said, bringing his face closer to Larry's. "We can't go screaming like a little girl now, can we?"

"Will you quit playing with your food already and get it over with. You take much longer and I'm gonna come over there and help you."

The blond looked past Larry at the other man. "You already had your dinner. You still hungry? Find your own!" He looked back into Larry's eyes, and the agonized man saw pupils that were fading from blue into a milky white color. Larry's eyes widened in terror.

"Ha-ha. Looks like little man here is getting a bit nervous."

"Mmm. Gives the blood a little bit of a sour taste to mingle with the sweet. Sweet 'n' sour!"

The two men laughed. Despite the pain, Larry pulled with all his strength, but he might have been trying to free his crushed hand from a vice. The blond man smiled, just a bit, and Larry saw the tip of an elongated canine dip below his upper lip like death peeking through at him. Larry screamed at the top of his lungs, but the sound was still muffled by the hand over his mouth.

"That's right, scream. Get it all out." The man closed his eyes and inhaled deeply. "I can smell the flavor."

"Will you get on with it? We don't have forever for you to play with your mouse."

Larry tugged and yanked, but he couldn't get free.

"I guess I am being a bit cruel," the blond man said. "Alrighty then. Turn your head and close your eyes, and daddy will quickly drain you dry." An impossibly strong hand turned Larry's head aside, and to his endless horror, the blond man opened his mouth, and his lips curled back to reveal two elongated canine teeth.

He had just enough time to scream again before hissing jaws tore into his neck.