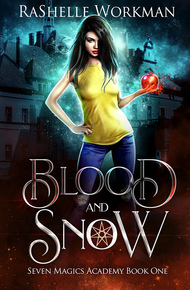 RaShelle Workman is an international bestselling author of reimagined fairy tales, science fiction, time travel, and romantic suspense. All of her novels have been listed on multiple bestseller lists, including her Blood and Snow series (now Seven Magics Academy), which has sold more than a million copies worldwide. Three of her books have been translated into Turkish and two are text-choice adventure games.

When RaShelle isn't writing, she enjoys baking, creating new taco recipes and watching Supernatural. She lives in Utah with her husband, three children, and their dogs. Find her online by visiting her website at: www.rashelleworkman.org. And sign up for her newsletter to receive free books and get information on book release dates: http://eepurl.com/chMcej.

Blood and Snow by RaShelle Workman

Snow White didn't plan on getting bitten by a vampire her first year at the Academy...

She knows three things for certain:

* She has a serious crush on one of her seven extraordinarily hot neighbors.

* Allowing a complete stranger to feed off her blood isn't a good idea. What's worse? She liked it. A lot

Her first year at Salem Academy, Snow has low expectations. But when the mysterious Chace Charming joins the school, everything changes.

Suddenly Snow is part of a world full of supernaturals and the greatest of them all is after her because she's the fairest in the land. What the hell?

With the help of her best friend and the guys, Snow must find a way to pass her first year without killing anyone.

An image popped into my head and began playing like a movie. I tried to shake it, but it was as though my brain had been hijacked.

A man stood in the trees behind my house. I got the feeling he waited for me to do something. Several of the guys—Sebastian, Bart, Salvatore, Heathcliff, and Daniel—plowed out of my back door and wrestled each other as they trampled down the stairs. They laughed heartily. I followed along with Dorian, but Gabe wasn't there. They were tossing something back and forth and I was trying to intercept it, desperate for whatever they were keeping away from me.

Suddenly they all stopped, and their faces turned grave. Sebastian had the thing I was trying to get in his hands. He and the others circled me. There was a coppery stench in the air, and it made my mouth water. Sebastian opened his hand. The thing, whatever it was, beat rapidly, and blood dripped from his fingers.

"I want it." Taking the bloody thing in Sebastian's hand, I brought it to my lips. It beat faster and faster. In that moment I knew it was a heart, the heart of my true love, but that didn't matter. Sinking my teeth into it I tasted the blood, felt it run down my throat. Like liquid pleasure. I shuddered.

A cackle rang through the night and a profound darkness entered my body. "Now you are mine."