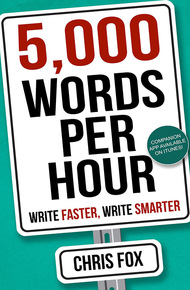 Chris Fox is the author of Write to Market, 5,000 Words Per hour, and over 20 bestselling science-fiction and fantasy novels. Chris has sold over a half million books, and is about to cross the 7 figure mark as a completely self-published author.

The fastest way to succeed as an author is to write more books. How do you do that with a day job, family, school or all your other time commitments? The secret is efficiency.

- Create an effective writing habit
- Track and improve your Words Per Hour
- Stop the endless editing and tinkering so you can finish your draft
- Use voice dictation software to dramatically increase words per hour.

If you're holding this book I'm going to go way out on a limb and guess that you'd like to write faster. I'm totally psychic, right? Normally these intro chapters give you several pages of boring info about the author. That's done for two reasons. First, it pads the book and makes it look longer. Second, it lets me brag about all the wonderful things I've accomplished. Neither is helpful to your goal of increasing your writing speed.

I'm going to sum up everything you'll care about that relates to me in one sentence. I consistently write 4,000 words an hour and sometimes spike up to 5,000 words an hour, hence the title of this book. I've used this method to publish three novels in the last nine months, and the last of those novels was written in 13 days. This book will teach you to do exactly the same thing.

You're going to learn a simple, organized system with actionable steps. This system will begin to work immediately and by the end of the very first chapter you'll already be writing more Words Per Hour than you do now. Each time you implement another step your speed will increase again, and you'll get faster as you practice.

This process takes work. It takes consistency, and it takes planning. If you do the work, though, you will accomplish things that you probably believe are impossible. How would you like to belt out 4,000 words an hour for two hours a day, each and every day? Or 5,000 for just one hour every single day? What would that do for your career as a writer? Wouldn't it be awesome to finish an entire draft of your novel in less than a month? Read on and that's exactly what you'll accomplish. If you want to get started skip to chapter one and let's get rocking!

I realize that some of you want to hear my story, to know how I went from never writing more than two hundred words a day to never less than three thousand. For those people I'm happy to give my story, which should make it clear exactly how I developed my system and why it will be easy for you to adopt.

My story begins back in 2004, which marks the very first time I ever wrote a story in the flow state. I cranked out 8,000 words in one glorious day, and that story went on to be published in a magazine called The Rifter. It was entitled Lord of the Deep, and I still remember the feeling of awe when a box unexpectedly showed up one day containing 10 copies and a check for $75.

It was the very first time I'd made real money writing, and it came after I'd spent a decade writing off and on, trying to learn my craft. I was both shocked and elated, and decided right there and then to write a novel. I sat down to do exactly that, but nothing came. Not a single word. I spent hours staring at the screen, and then I gave up for five years.

There were a lot of reasons for my failure, not the least of which was that I had no plan. Up to that point I was a pantser, one of those writers who run heedlessly through a story with no idea where it will carry them. They write by the seat of their pants, hence the name. Back then I loved that, because my idol Stephen King wrote exactly the same way.

Unfortunately, I didn't understand just how dangerous writing like that can be. It leads to occasional bursts of brilliance, but when you are not in the throes of such a binge words often fail you entirely. I hated that feeling, and consigned myself to hoping for another burst of clarity where I'd somehow churn out an amazing novel. It never came, of course.

I discovered the first part of my 5k per hour system completely by accident in 2009. Two years prior I'd worked in the mortgage industry, and I saw the crash coming. So I packed my things and left Los Angeles for Northern California, where I'd gone to high school. I was burnt out from six years in the rat race and I had my Lester Burnham moment (check out the movie American Beauty if you don't get the reference). I took the job with the least amount of responsibility- customer service at a local credit union.

If a customer called in to get their checking account balance or to move some money into a CD I was the guy answering the phone. It was mind-numbing work, but I loved it. Why? Because between phone calls there were often 1-2 minute gaps, and I started using them for what I call micro-sprints. I'd hang up the phone with a customer, then instantly tab over to my Word document and begin typing.

This taught me several valuable lessons without even realizing it. I never allowed myself to go back and edit, because if you only have 80 seconds to write and you allow yourself to edit you'd only have three paragraphs at the end of a full day. I found that out the hard way, which is why I stopped allowing such edits.

When I stopped editing and just let myself write, I quickly found I could finish a thousand words a day while someone else paid me to do it. This was a heady experience, because outside of the few bursts of creativity I'd had in my then fifteen years of intermittent writing I'd never consistently broken a thousand words a day.

I've always been a numbers guy, so I created a really simple spreadsheet to track my daily word count. Before long I was hitting 2k a day, and I sustained that until I'd completed a 180,000 word novel entitled Yuri Silvertongue & the Violet Spire. That novel will never see the light of day, because it was terrible. Yet it was still a massive accomplishment, because in writing it I'd done something that over 90% of writers fail to do. I'd completed a novel. It didn't matter that the novel was essentially fan fiction for someone else's pre-existing world. It didn't matter that it was trite and uneven. I had finally accomplished something I'd previously believed impossible.

Fast forward five years. I now crank out a minimum of 5,000 words every single day, and this generally takes me less than an hour and a half. I can occasionally do it all in a single hour. Yes, you read that correctly. I can crank out 5,000 words an hour under the right circumstances. That's over 80 words a minute for a full sixty minutes.

This system is all about incremental improvements. Start small and dream big.