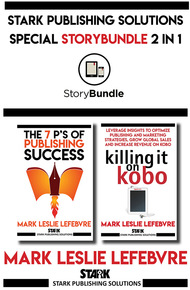 Mark Leslie Lefebvre has worked in the book industry since 1992 in almost every style of brick and mortar, online, and digital bookstore. He is a past President of the Canadian Booksellers Association, former Director of Self-Publishing and Author Relations for Rakuten Kobo, and the founder of Kobo Writing Life, Kobo's free direct publishing platform. He has given talks about the business of writing and publishing across North America and in in Europe.

With just under thirty years of experience in bookselling and as an author who has embraced both traditional and indie-publishing opportunities, Mark is an advocate for helping authors understand the options available to them for finding success on their own unique author journey.

A special 2 in 1 Special StoryBundle edition of the books The 7 P's of Publishing Success and Killing It On Kobo.

THE 7 P'S OF PUBLISHING SUCCESS

What seven traits do the most successful authors have in common? Which strategic approaches can have the most positive effect on your author career? Where should you focus your energy and effort for maximum results?

Regardless of whether your path involves traditional publishing or indie publishing, this book will help you understand the fundamental stepping stones to publishing success with examples of how these 7 P's (Practice, Professionalism, Patience, Progression, Persistence, Partnership, Patronage) can guide you on your writing and publishing journey.

KILLING IT ON KOBO

Do you want to increase your overall sales and visibility on Kobo? Are you having trouble gaining any traction or growing your reader base outside the Kindle store?

Wouldn't it be empowering not to be dependent upon a single retailer for most of your eBook income?

If you want to tap into the mind behind the creation of Kobo's world-class self-publishing platform, Kobo Writing Life, to understand both the basics and some of the complexities of the platform, then look no further.

Killing It On Kobo is an in-depth, heart-felt and eye-opening series of insights collected in a single volume to give you full access to information and proven strategies that you can use to maximize your own sales and ultimate success selling through Kobo.

ONE INTERESTING THING about writing is that there are so many different courses and workshops that teach a writer the craft of writing. But there's not nearly as many resources out there to assist a writer with the behavior that is associated with being a professional.

And, just for the sake of clarity, I'm not talking about a pro as being someone who receives money for the work they produce. I'm talking about the way a writer behaves and interacts within the writing and publishing communities and with fans; about reading and understanding different publishing-related contracts, meeting deadlines and commitments, operating within the conventions of an expected format or genre; about dealing with reviews, critics and adversity and maintaining an overall positive reputation.

The digital world created opportunities well beyond the restrictions that previously existed for writers. But it also, inadvertently, exposed a far wider realm of levels of professionalism, or perhaps lack of professionalism than ever before.

Perhaps, in the old school "gatekeeper" process of finding an agent and publisher and of getting work published, the large steps, restrictive processes and longer waiting periods allowed a writer the opportunity to acclimatize themselves to moving from hobbyist writer to professional. This isn't to say that the publishers offered their writers any training in this regard, nor that all people who have been or are traditionally published behave like professional writers; but perhaps the required actions such as the query letter, the manuscript submission process or even the pitching process had the side-effect of forcing some writers into beginning to develop those skills well before their work was actually published.

Of course, one side effect of this new world which allows virtually anybody the ability to create an account and click a few buttons and get their eBook onto the world's largest bookstore in a matter of hours, means that there are many "writers" out there who aren't actual writers, like you and me. They are simply using the same tools believing that they'll be able to make a quick buck. In the strictly traditional "gatekeeper" process of publishing, most of these people wouldn't have bothered, because of the intense work and waiting involved in that old process.

These "get rich quick" hucksters can give all of us writers a bad name; because their behavior is typically far removed from any desire to ever be a professional writer. But let's just ignore those people for now, except to say that, because you have taken the time to read an eBook like this, you already stand out as someone willing to invest not only in your writing, but in yourself as a professional.

Of course, just in case you are thinking that I am poo-pooing digital publishing in favor of the "glory days" of traditional publishing, let me share the flip side. Because there is another trend that has taken place in traditional publishing that didn't exist before. There was a time, long ago, where a writer could simply live like a hermit, pound out words on their typewriters, mail that manuscript to their editor or agent, and sit back, letting the system take care of the distribution and sales of their work. They never had to appear in public, nor did they even have to behave in a professional manner. The same gatekeepers that held back the flood gates of submitted manuscripts also protected some of their published writers from ever being revealed as awkward introverts who weren't skilled at interacting well with others. They also served nicely in terms of keeping the public unaware of which authors were just plain jerks.

Those days are gone. Even if you traditionally publish, your job isn't done once you hand your manuscript over. One of the criteria publishers pay attention to for the writers they contract is their presence, their engagement in social media, and their professionalism.

For the most part, regardless of whether you are traditionally published or are self-published, understanding and behaving professionally can be something that prevents you from being successful, or standing out as a consummate pro.

In this chapter, I break professionalism down to three elements. "Paperwork, Contracts and Content," "In Person Appearances and People Skills," and "Adversity and Rejection."