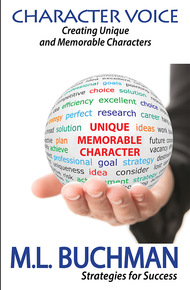 Character drives story—any story, any genre. Imagine 2001: A Space Odyssey without HAL, Tolkein without Gandalf, or Ian Fleming without James Bond. A great character can't save a bad book, but the best writing in the world won't survive a weak one.

For over 25 years, M.L. has been studying Character Voice. This book collects what he has learned so far. A set of practical tools that work for any genre and any writing style. He also discusses how to evaluate which will work for you.

Do these tools guarantee flawless characters? If only. Are they essential to create a character who will keep your readers awake all night? Absolutely! Every author uses them in some form. In this book M.L. Buchman makes them understandable and accessible.

In the beginning was the character.

I'm not trying to be sacrilegious at all. I'm talking about story. And I don't care if your story is a romance, a thriller, or science fiction—character is the holy grail of story. Yes, even in personal memoir you are developing a character that is more (or sometimes less) like you. But even if it is the truest self you can write, it is still a character you are portraying upon the written page.

Some will argue that science fiction is setting first. Yes, without amazing settings, science fiction fails to entice. But without grab-you-by-the-throat characters, it's never going to rise above the genre. Think about: The Terminator without The Terminator or Terminator II without Sarah Connor stepping to the fore, Alien without Ripley, Avatar without Neytiri, or The Martian without Mark Watney having to "science the shit out of this." Not so much.

Character trumps everything else in story. There are literary books where that masterful character is a dog, cat, or even a city. The movie of 2001: A Space Odyssey was barely rescued from being just another 1960s psychedelic drug experience by the character of HAL—the ultimate all-powerful computer with the evil eye, a childlike innocence, and a terrifyingly dead-flat monotone.

The exact same logic can be applied to the plot in a thriller, the puzzle in a mystery, and so on. A powerful character is what lifts the story above the common morass.

Now character voice is by no means the sole element of a great story or series. In his amazing book Writing the Blockbuster Novel, Albert Zuckerman identified seven elements that he felt were essential to a truly major novel. His list is:

The first two and the last are firmly anchored in character (in fact they all are, but to understand that, I recommend reading his book). For the purposes of this book, all we need to know at this moment is that character is screamingly important and making that character distinct must be one of our primary duties as a writer.