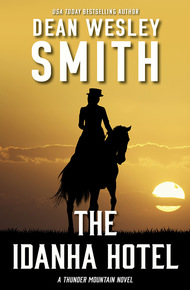 1902: Boise, Idaho. Megan Taber loves her job baking at the Idanha Hotel. Widowed young, she knows the rest of her life revolves around her baking.

Carol Kogan, a doctor and researcher from the future, eats breakfast every morning at the Idanha Hotel just for Megan's fresh breads. Until one fine May morning in 1902, when Carol meets Megan outside the hotel. Before they finish their conversation, Megan collapses from a massive heart attack.

Carol knows saving Megan with 1902 medicine would prove impossible. But saving her with future medicine might prove even more dangerous—for both of them.

A twisted, heart-wrenching addition to the acclaimed Thunder Mountain series.

Dean Wesley Smith's Thunder Mountain series plays to all his strengths—and his loves. He loves Idaho, and, in particular, its history (since his family helped colonize the state). He loves time travel. He loves mysteries. And he loves finding old nooks and crannies of the past in which to set his stories. The Idanha Hotel actually existed once, and still does, at least in Dean's powerful imagination. – Kristine Kathryn Rusch

MEGAN TABER'S PASSION was baking. At five-ten and barely one-hundred-and-ten pounds, she didn't look like a typical baker, but around Boise in 1902, she was known as the best there was.

Clearly loving what she did showed in the breads and pastries she created.

She worked at the Idanha Hotel, the fancy new place that had only been open for just over a year. It boasted the best restaurant in the entire state and she was proud to be a part of that. And from what she understood from reviews she saw in major papers, her pastries and cakes and pies had made the hotel restaurant one of the best places to eat in the entire west.

She often worked from sunset to sunrise to have enough breads and cakes and desserts ready for a day in the hotel, but she didn't mind at all. Baking was her life.

She was widowed from Jason Taber two months after they had married. Jason had been a good man, treated her right, and she would have done her best to make him a good wife if he had lived.

He wasn't the love of her life, but marrying him at eighteen got her out of Placerville, a small town in Montana. She had figured he was the best she could ever do.

Two months after they were married and had moved to Boise, he fell from a ladder and hit his head and never woke up. That had been seven years earlier.

She now seldom thought of him, which she felt sad about, actually. He deserved more than being completely forgotten, even by his widow.

But she never planned on marrying again, so keeping his name was about as much respect as she was able to give to him.

She had made her own way, without a husband, and she was proud of that fact.

She had spent the last seven years learning how to bake, how to be the best. She read all the magazines she could get from the East and talked with every elderly woman she could about their recipes, or at least the ones that they would talk about.

She studied baking like scientists studied the stars or nature. She was passionate about it.

To her, baking was not only a science, but an art. Of course, she never said that to anyone.

She had worked at a few other restaurants around town, getting a reputation as the best baker of any kind of bread, pie, or cake there was in all the West.

When the Idanha Hotel was scheduled to open its doors on January 1st, 1901, Chef Pickner had offered her the job, with nice pay and a furnished apartment in the hotel. She had jumped at the chance.

She had had job offers since for hotels and restaurants in San Francisco, but she had always told Pickner when the offer came in that she would stay with him as long as he wanted her.

And in return for that loyalty, he treated her well and demanded that everyone around her respect what she did. She couldn't ask for more.

So her baking drew in many, many a diner at the Idanha Hotel Restaurant. Her bread seemed to melt with buttery deliciousness in a person's mouth and her pies and cakes were heavenly in taste.

At least that's what everyone told her. She just appreciated that her work was enjoyed every day. That was enough for her.

And if it was up to her, the Idanha was where she would remain the rest of her life.