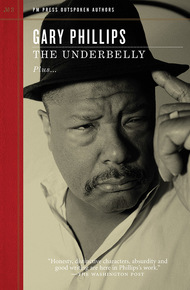 Gary Phillips writes tales of mayhem and menace. In other pursuits he's been a union rep, run a nonprofit begun as a response to the '92 L.A. riots, taught incarcerated youth, was a community organizer in South Central Los Angeles where he was born and raised, toiled as a printer, worked for one of those shadowy 527s, and delivered dog cages. Please visit his website at: www.gdphillips.com.

The Underbelly by Gary Phillips

Having grown up in late-sixties South Central Los Angeles, Gary Phillips vividly recalls stories of what happened to brothers who ran afoul of the "polices" of the 77th Division. Small wonder that in his teens he organized against police abuse, later became active in the antiapartheid movement, was down against the contras, did duty as a labor rep, worked for a political action committee, and taught incarcerated youth. So of course matters of race, class, and the social fabric, along with influences of blaxploitation films and Jack Kirby comic books, permeate his crime and mystery stories. The Underbelly is a novella about a semi-homeless Vietnam vet searching for a disabled friend gone missing from Skid Row. It's a solo sortie where the flashback-prone protagonist must deal with gentrification, kick-ass community organizers, an elderly sexpot, a magical skull, chronic-lovin' knuckleheads, and the perils of chili-cheese fries at midnight. The Underbelly is illustrated with photos and drawings.

A rollicking interview wherein Phillips riffs on Ghetto Lit, politics, noir and the proletariat, the good negroes and bad knee-grows of pop culture, Redd Foxx and Lord Buckley, and wrestles with the future of books in the age of want.

When fellow mystery writer Nathan Walpow asked me to try my hand at an online serialized mystery on www.fourstory.org, a site he edits and I now contribute to regularly, I didn't expect that I could complete one in that form—let alone The Underbelly would see second life as a printed novella. Imagine . . . print as second life. In just the short span of years since I undertook The Underbelly, the traditional publishing world is in something of a freefall. Not to mention the careers of those of us who still love the tactile feel of the printed book in our hands—the hard evidence of our labors at the keyboard.

Kindles, iPads, downloading e-books off the net, reading chapters on your iPhone, social media marketing, it's all in a whirl as ways in which facts and news and entertainment are delivered to readers and viewers. Yet what remains is the hu- man need for order in a chaotic universe, and so our love of stories doesn't cease. Indeed all these, and so many other forms of stimulating certain portions of our brains and hearts, seem to demand more stories, more ways in which narratives tell us of the rise and fall of heroes, scheming dentists and sacrificing single mothers.

Maybe, finally, it'll be a mash-up of you twittering your fifteen minutes of fame via live video streaming and your actions deconstructed by online and cable pundits as part of the never- ending 24/7 news cycle.

Meanwhile, I hope to still have avenues to tell my tales, so much thanks to Nathan, PM Press, and particularly my comrade, the erudite editor Andrea Gibbons, for shepherding The Underbelly to print. While I'm down for the aforementioned forms of deliver- ing content, the printed word will always hold the mystery and awe that first gripped me those decades ago as a kid negotiating the aisles of the library at 61st Street Elementary School.

"Who you supposed to be, old school?" Savoirfaire taunt- ed, flexing his shoulders and shifting his weight onto his back foot. "Captain America don't live here no more."

"I'm telling you it's through," Magrady repeated calmly, eyes moving from the man's hands to his face, locking onto the faux-designer shades the discount desperado wore. "You and Floyd are done."

"You're missing the point, Flavor Flav," Magrady said. "My message is what you should be focusing on. Floyd Chambers is no longer on your loan list. No more vig off his SSI checks."

The two men stood on Wall, smack in the womb of L.A.'s Skid Row. Unlike the street's more notorious incarnation in Manhattan, the West Coast version didn't boast of edifices as testa- ment to giddy capitalism. The bailout around here was of the cheap whiskey and crack rock variety, the meltdown a daily occurrence.

"Oh, uh-huh." The bottom-feeder nodded his head. "You lookin' to take over some of my territory, that it? Don't seem to me like you got enough weight between your legs to be doin' that, nephew. Don't appear to me you got enough left to run this block."

Several homeless people had stopped to watch the show. Both men were about the same height, roughly the same build. But where Magrady's face was lined and his whiskers grey, Savoirfaire's decades-younger features were untroubled and un- blemished—the mask of the uncaring sociopath.

"We're done," Magrady said, beginning to step back and away from where the other man stood outside the open door of his Cadillac Escalade. A vehicle with twenty-two-inch gold spinners for rims. Incongruously, Sam Cooke played softly on the vehicle's sound system.

The thug was butter-smooth in whipping out his pruning knife. The blade was vectoring toward Magrady's neck by the time the Vietnam vet reacted, forearm up. The sharp crescent sunk into his sleeved arm.

"What you got to say now, negro?" Savoirfaire gritted his teeth, expecting to easily pull his weapon free while ripping flesh and sinew. But, having been forewarned by Chambers, Magrady had wrapped several layers of cardboard around his arms under his oversized flannel shirt. The knife was stuck.

As Savoirfaire tugged the blade loose, Magrady drove the heel of his work boot into the hoodlum's knee, eliciting a deci- sive crack. The asshole teetered and Magrady landed a straight left to his jaw. He plopped down heavily on the contoured seat of his ostentatious 'Lade, his sunglasses askew. Magrady swiftly slammed the door three times on Savoirfaire's shins, causing him to drop his knife.

Over the yelping, Magrady repeated, "It's done." He then sliced the hook knife into one of the Escalade's expensive sport tires. Magrady walked quickly away as it hissed flat and Savoirfaire screamed profanities but didn't come after the older man. There seemed to be a collective disappointment that ed- died through the small crowd. The dustup over, the aimless now had to return to the crushing dreariness of surviving.