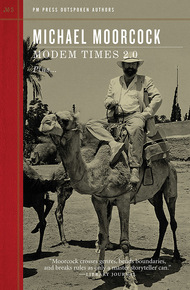 Michael Moorcock is among the most influential British authors of fantasy, science fiction, and mainstream literature. His many novels include the Elric series, the Cornelius Quartet,Gloriana,Mother London, andKing of the City. Moorcock has received the Nebula, World Fantasy, and British Science Fiction awards and is a Grand Master of the Science Fiction and Fantasy Writers of America. As editor of the science-fiction magazineNew Worlds, Moorcock was one of the progenitors of the experimental and controversial new-wave literary science-fiction movement. His nonfiction has appeared in many UK outlets, including theGuardian,Daily Telegraph, andNew Statesman. A member of the progressive rock band Hawkwind, Moorcock received a platinum disc for the albumWarrior on the Edge of Time.

Moorcock's own literary accomplishments include his classic Mother London, a romp through urban history conducted by psychic outsiders; his comic Pyat quartet, in which a Jewish antisemite examines the roots of the Nazi Holocaust; Behold The Man, the tale of a time tourist who fills in for Christ on the cross; and of course the eternal hero Elric, swordswinger, hellbringer and bestseller.

And now Moorcock's most audacious creation, Jerry Cornelius—assassin, rock star, chronospy and maybe-Messiah—is back in Modem Times 2.0, a time-twisting odyssey that connects 60s London with post-Obama America, with stops in Palm Springs and Guantanamo. Modem Times 2.0 is Moorcock at his most outrageously readable—a masterful mix of erudition and subversion.

Plus: the non-fiction essay "My Londons" and an Outspoken Interview with literature's authentic Lord of Misrule.

MINIATURE phones you carry in your pocket and that use satellite tracking technology to pinpoint your location to just a few centimeters; itty-bitty tags that supermarkets use to track their products; bus passes that simultaneously monitor your body temperature to find out how often you are having sex . . .

Mother Goose: Youth, why despair? The girl thou shalt obtain This present shall her guardian's sanction gain The GOOSE appears Nay doubt not, while she's kindly used, she'll lay A golden egg on each succeeding day; You served me—no reply—there lies your way.

Living Off the Market

1. A Mystery in Motley

GALKAYO, Somalia—Beyond clan rivalry and Islamic fer- vor, an entirely different motive is helping fuel the chaos in Somalia: profit. A whole class of opportunists—from squat- ter landlords to teenage gunmen for hire to vendors of out- of-date baby formula—have been feeding off the anarchy in Somalia for so long that they refuse to let go.

Madness has been the instigator of so much suffering and destruction in the world throughout the ages that it is vitally important to uncover its mechanisms.

THE SMELL OF PINE and blood and sweet mincemeat, cakes and pies and printing ink, a touch of ice in the air, a golden aura from shops and stalls. Apples and oranges; fresh fruit, chipolata sausages. "Come on, girls, get another turkey for a neighbour. Buy a ten-pounder, get another ten-pounder with it. Give me a fiver. Twenty-five pounds—give us a fiver, love. Come on, ladies, buy a pound and I'll throw in another pound with it. Absolutely free." Flash business as the hour comes round. No space in the cold room for all that meat. No cold room at all for that fruit and veg. The decorations and fancies have to be gone before the season changes. "Two boxes of crackers, love, look at these fancy paper plates. I'll tell you what, I'll throw in a tablecloth. Give us a quid for the lot. Give us a quid thank you, sir. Thanks, love. That lady there, Alf. Thank you, love. Merry Christmas. Merry Christmas."

"I hate the way they commercialize everything these days."

"That's right, love. A couple of chickens, there you go, love—and I'll tell you what—here's a pound of chipos for nothing. Merry Christmas! Merry Christmas! Merry Christmas! Seven-pound sacks. Two bob. No. Two sacks for half a dollar. Half a dollar for two, love. Last you the rest of the year. Stand up, darling. Here, Bob, hold the fort, I'm dying for a slash. Dolly mixtures, two bags for a shilling. Two for a shilling, love. That's it, darling! Genuine Airfix they are, sir. All the same price. Those little boys are going to wake up laughing when they see what Santa's brought them. Go on, sir, try it out. I'll throw in the batteries. Give it a go, sir. No, it's all right, son. Not your fault. It went off the curb. I saw it happen. Go on, no damage. I'll tell you what, give me ten bob for the two. Tanner each, missis. You'll pay three and six for one in Woolworths. I'll tell you what. Go in and have a look. If I'm wrong I'll give you both of 'em free. Hot doughnuts! Hot doughnuts. Watch out, young lady, that fat's boiling. How many do you want? Don't do that, lad, if you're not buying it. Get some cocoa. Over here, Jack. This lady wants some cocoa, don't you, darling? Brussels. Brussels. Five pounds a shilling. Come on, darling—keep 'em out on the step. You don't need a fridge in this weather."

Now as the sky darkens over the uneven roofs of the road, there's a touch of silver in the air. It's rain at first, then sleet, then snow. It is snow. Softly falling snow. They lift their heads, warm under hoods and hats, their faces framed by scarves and turned up collars. (Harlequin goes flitting past, dark blue cloak over chequered suit, heading for the Panto and late, dark footprints left behind before they fill up again.) A new murmur. Snow. It's snow. "Merry Christmas, my love! Merry Christmas." Deep-chested laughter. Sounds like Santa's about. The students stop to watch the snow. The men with their children point up into the drawing night. "Merry Christmas! Merry Christmas!" It's a miracle. Proof that all the disappointments of the past year are disappearing and all the promises are really going to be kept. "Happy Christmas, darling. Happy Christmas!" The Salvation Army stops on the corner of Latimer Road. The tuba player takes out his vacuum of tea, sips, blows an experimental blast. Glowing gold flows from the pub and onto the cracked and littered pavement. A sudden roar before the door closes again. "Merry Christmas!"

A boy of about seven holds his younger sister's hand, laughing at the flakes falling on their upturned faces. His cheeks are bright from cold and warm grease. His thin face frowns in happy concentration.

"Here you go, darling. Shove it in your oven. Of course it'll go. Have it for a quid." All the canny last minute shoppers picking up their bargains, choosing what they can from what's too big or too small or too much, what's left over or can't be sold tomorrow or next week. It has to be sold tonight. "I'll tell you what, love. Give us a monkey for the lot." Merry Christmas. Merry Christmas—sparking toys—little windmills, tanks and miniature artillery—glittering foil, tinsel and trinkets. Clattering, click- ing, nattering, chattering, clanking, whizzing, hissing, swishing, splashing the street with cascades of tiny lights. Multicoloured bulbs winking and shivering, red, white, blue, green, and silver.

Stacks of tightly bound trees, already shedding ripples of needles, some rootless, freshly sawn, some still with their roots. The smell of fresh sawdust, of earth . . . The smell of a distant forest. The boy knows he has to get a big one and it has to have roots. "Five bob, son. That's bigger than you, that is. Give us four. Six foot if it's an inch. Beautiful roots. What you going to do with it after? Plant it in the garden? That'll grow nicely for next year. Never buy another tree. That'll last you a lifetime, that will."