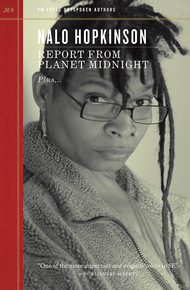 Nalo Hopkinson has been busily (and wonderfully) "subverting the genre" since her first novel, Brown Girl in the Ring, won a Locus Award for SF and Fantasy in 1999. Since then she has acquired a prestigious World Fantasy Award, a legion of adventurous and aware fans, a reputation for intellect seasoned with humor, and a place of honor in the short list of SF writers who are tearing down the walls of category and transporting readers to previously unimagined planets and realms.

Never one to hold her tongue, Hopkinson takes on sexism and racism in publishing in "Report from Planet Midnight," a historic and controversial presentation to her colleagues and fans.

And Featuring: Our Outspoken Interview, an intimate one-on-one that delivers a wealth of insight, outrage, irreverence, and top-secret Caribbean spells.

"Whatcha doing, Kamla?" I peer down at the chubby- fingered kid who has dug her brown toes into the sand of the beach. I try to look relaxed, indulgent. She's only a child, about four years old, though that outsize head she's got looks strangely adult. It bobs around on her neck as her muscles fight for control. The adoption centre told Babette and Sunil that their new daughter had checked out perfectly healthy otherwise.

Kamla squints back up at me. She gravely considers my question, then holds her hand out, palm up, and opens it like an origami puzzle box. "I'm finding shells," she says. The shell she proffers has a tiny hermit crab sticking out of it. Its delicate body has been crushed like a ball of paper in her tight fist. The crab is most unequivocally dead.

I've managed to live a good many decades as an adult without having children in my life. I don't hate them, though I know that every childless person is supposed to say that so as not to be pecked to death by the righteous breeders of the flock. But I truly don't hate children. I just don't understand them. They seem like another species. I'll help a lost child find a parent, or give a boost to a little body struggling to get a drink from a water fountain— same as I'd do for a puppy or a kitten—but I've never had the urge to be a father. My home is also my studio, and it's a warren of tangled cables, jury-rigged networked com- puters, and piles of books about as stable as playing-card houses. Plus bins full of old newspaper clippings, bones of dead animals, rusted metal I picked up on the street, what- ever. I don't throw anything away if it looks the least bit interesting. You never know when it might come in handy as part of an installation piece. The chaos has a certain nestlike comfort to it.

Gently, I take the dead hermit crab in its shell from Kamla's hand. She doesn't seem disturbed by my claim- ing her toy. "It's wrong," she tells me in her lisping child's voice. "Want to find more."

She begins to look around again, searching the sand. This is the other reason children creep me out. They don't yet grok that delicate, all-important boundary between the animate and inanimate. It's all one to them. Takes them a while to figure out that travelling from the land of the living to the land of the dead is a one-way trip. I drop the deceased crab from a shaking hand. "No, Kamla," I say. "It's time to go in for lunch now."

I reach for her little brown fist. She pulls it away from me and curls it tightly towards her chest. She frowns up at me with that enfranchised hauteur that is the prov- ince of kings and four-year-olds. She shakes her head. "No, don't want lunch yet. Have to look for shells."

They say that play is the work of children. Kamla starts scurrying across the sand, intent on her task. But I'm responsible to Kamla's mother, not to Kamla. I prom- ised to watch the child for an hour while Babette prepared lunch. Babs and Sunil have looked tired, desperate and drawn for a while now. Since they adopted Kamla.

There's still about twenty minutes left in my tenure as Kamla's sitter. I'm counting every minute. I run after her. She's already a good hundred yards away, stuffing shells down the front of her bright green bathing suit as quickly as she can. When I catch up with her, she won't come. Fifteen minutes left with her. Finally, I have to pick her up. Fish-slippery in my arms, she struggles, her black hair whipping across her face as she shakes her head, "No! No!" I haul her bodily back to the cottage, to Babette. By then, Kamla is loudly shrieking her distress, and the neighbours are watching from their quaint summer cottages. I dump Kamla into her mother's arms. Babette's expression as she takes the child blends frustration with concern. Kamla is prone to painful whiplash injuries.

Lunch consists of store-bought cornmeal muffins served with sausages cut into fingerjoint-sized pieces, and bright orange carrot sticks. The muffins have a sticky-fake sweetness. Rage forgotten, Kamla devours her meal with a contented, tuneless singing. She has slopped grape juice down the front of her bathing suit. She looks at me over the top of her cup. It's a calm, ancient gaze, and it un- nerves me utterly.

Babette has slushed her grape juice and mine with vodka and lots of ice. "Remember Purple Cows?" she asks. "How sick we got on them at Frosh Week in first year?"