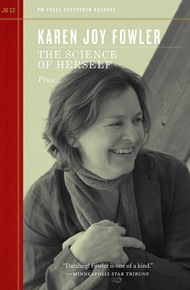 The Science of Herself by Karen Joy Fowler

Widely respected in the so-called "mainstream" for her New York Times bestselling novels, Karen Joy Fowler is also a formidable, often controversial, and always exuberant presence in Science Fiction. Here she debuts a provocative new story written especially for this series. Set in the days of Darwin, "The Science of Herself" is a marvelous hybrid of SF and historical fiction: the almost-true story of England's first female paleontologist who took on the Victorian old-boy establishment armed with only her own fierce intelligence—and an arsenal of dino bones.

"The Pelican Bar," a homely tale of family ties that makes Guantánamo look like summer camp; "The Further Adventures of the Invisible Man," a droll tale of sports, shoplifting and teen sex; and "The Motherhood Statement," a quietly angry upending of easy assumptions that shows off Fowler's deep radicalism and impatience with conservative homilies and liberal pieties alike.

And Featuring: our Outspoken Interview in which Fowler prophesies California's fate, reveals the role of bad movies in good marriages, and intimates that girls just want to have fun (which means make trouble).

None but a woman can teach the science of herself. —Jane Austen

In 1814, Anne Elliot came to Lyme Regis and watched Louisa Musgrove fall from the steps of the breakwater onto the rocks below. It was late November, so even though the weather was good, the beach was empty of bathers and bathing machines. To their left, they could see the steep road spilling through the village, landing on the expanse of level beach. It was, Austen tells us, a vista both lovely and wonderful. The water was a dark Byronic blue. Seagulls wheeled in the air above them, shrieking. The air smelled of salt.

There might have been a scavenger or two, comb- ing the tide-line for flotsam. Perhaps a fisherman had hauled his boat out, flipped it belly-up for repairs, and was hammering in the distance. Anne Elliot noticed none of these. Nor did she see a young girl, well known to the locals, selling snakestones, vertiberries, and devil's toenails from a stand. This girl might have identified the Elliot party as tourists, might have even been approach- ing them with a basket of curious rocks just in time to see Louisa fall.

Or not. Strangely dressed, lower class, odd in af- fect, and desperately poor, she was not really the kind of girl who wanders into an Austen novel.

In 1803, Austen herself had come to Lyme Regis and met this same girl's father. His name was Richard Anning. He was a cabinetmaker. Austen needed some repair work done on the lid to a box; he was recom- mended to her. We know these things because she found the price he asked so offensively high that she noted it in her diary.

Not noted: Richard Anning was a dissenter from the Church of England, a Congregationalist, and an out- lier even there, an activist who'd organized a protest over the food shortages occasioned by the Napoleonic Wars and worked with the dominant church on issues of Poor Law.

Also not noted: his second career. Richard Anning was a fossil hunter. There is no mention of fossils in Austen's descriptions of the charms of Lyme Regis, yet it was said that smugglers could identify the beach in the dark simply by raking with their fingers through the sand. Two hundred million years ago, Lyme Regis lay at the bottom of a tropical sea, but no one knew this yet or would have believed it if they had.

Austen came again the following year. She and her sister Cassandra were uncommonly hardy, continu- ing their ocean bathing long into October. In 1804, they witnessed together the great fire that destroyed some fifty houses in Lyme.

Five years after Austen's second visit and five years before Anne's, Richard Anning died. He left behind a wife, two living children—a son, Joseph, thirteen at the time, and a daughter, Mary, ten—and eight dead and in the graveyard. Also a debt of £120. Within a year, the family was on parish relief.