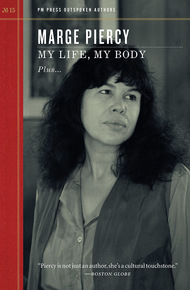 Marge Piercy is the author of seventeen novels, including the national bestsellers Gone to Soldiers, Braided Lives, and Woman on the Edge of Time, seventeen volumes of poetry, and a critically acclaimed memoir, Sleeping with Cats. Born in center-city Detroit, educated at the University of Michigan, the recipient of four honorary doctorates, she has been a key player in many of the major progressive political battles of our time.

My Life, My Body by Marge Piercy

In a candid and intimate new collection of essays, poems, memoirs, reviews, rants, and railleries, Piercy discusses her own development as a working-class feminist, the highs and lows of TV culture, the ego-dances of a writer's life, the homeless and the housewife, Allen Ginsberg and Marilyn Monroe, feminist utopias (and why she doesn't live in one), why fiction isn't physics; and of course, fame, sex, and money, not necessarily in that order. The short essays, poems, and personal memoirs intermingle like shards of glass that shine, reflect—and cut. Always personal yet always political, Piercy's work is drawn from a deep well of feminist and political activism.

Also featured is our Outspoken Interview, in which the author lays out her personal rules for living on Cape Cod, finding your poetic voice, and making friends in Cuba.

When did I first become a feminist? I suspect it was around puberty, when I began to think hard about what I saw in my family and around me.

My mother had been sent to work as a chambermaid when she was still in the tenth grade, because her family was large and poor and needed the income she could bring in. She had an active mind, a strong sense of politics and an immense curios- ity. She read a great deal, haphazardly. She had no framework of knowledge of history or economics or science in which to fit what she read or what she experienced, so that intelligent obser- vations jostled superstitions and folk beliefs. She was a mental magpie, gathering up and carrying off to mull over anything that attracted her attention, anything that glittered out of the ordinary boredom of being a housewife. There was, truly, some- thing birdlike about her, a tiny woman (only four feet ten) with glossy black hair who would cock her head to the side and stare with bright dark eyes.

She had grown up in a radical Jewish family where politics was discussed and debated. She had a sense of class conflict and social reality that was the most consistent and logical part of her mind. My father could easily be seduced by racism, sexism, Republican promises of lowering taxes. Like many working class men of his time, he started out on the left and moved steadily toward the right. My mother never wavered in her analysis of who was on her side and who was not. She trusted few politicians, but she appreciated those she thought fought for the rights of ordinary people.

My father very much enjoyed sexist jokes and told them till the end of his life, ignoring my attitudes if I was present. They were a way of knocking on the wooden reality of how things were with men and women and showing how sound it was. My mother did not tell such jokes and seldom laughed at them. However, she had attitudes of her own. She admired women who fought for other women, but she also had contempt for women. She com- plained of women's weakness, at the same time that she herself had few strengths to fall back on. She viewed sex as a powerful force that carried off women into servitude. A woman's sexuality was a tremendous force that exacted a lifelong price from her.

When I was little, I thought of my mother as very strong—for certainly she had power over me. My father would punish me se- verely, with fists and feet and a wooden yardstick. But my mother was usually the one who set the rules, since my father did not take much interest, except sometimes to decide I must do something I didn't want to do, because he had contempt for cowards: climb a ladder to the roof, cross a narrow high footbridge. These demands had little to do with me, but were part of a war between them. She had many fears (he was driving too fast, too dangerously) that in some way pleased him. Her fear proved he was strong and able, in comparison to my mother (whom he never taught to drive). But I was the battleground in which he demonstrated how women were afraid by demanding I do things I feared.

So I learned to do them. I learned to overcome my fear and do foolhardy things never without thinking but without giving an outward sign of my fear. I did it partly in a futile effort to gain his respect, which could never be granted. That respect was never attainable because of my sex and because my mother and I were Jewish, and he was not. He was not anything in particular. He thought of himself as English, Anglo-Saxon, but he was only one quarter English; he was half Welsh and one quarter Scottish. He was far more a Celt than an Anglo-Saxon. He was a moody man who feared and denied emotions; they were what he regarded as sins. He liked to drink; he liked to eat what he regarded as proper masculine food (meat and potatoes mostly); he liked to play poker and other card games. But he intensely disliked be- ing aware that he felt anything except anger. His anger was swift and thunderous. He never hit my mother but he frightened her. Again, I was the surrogate. He could and did hit me. Also my older brother.

My mother had a temper of her own. She got angry as quickly as he did. She had a far more vivid vocabulary of curses, some in Yiddish (used only with me), most in English. "Shit and molasses!" she would yell. "Piss blood and drink it!" Her temper was released on me, of course, and on objects. I remember her at the kitchen table pulling the cloth laden with supper—dishes and food and flowers—and throwing it against the wall. She broke dishes with abandon. Never the good dishes. No, she broke the mismatched dishes she got as giveaways at the movies or bought at garage and yard sales.