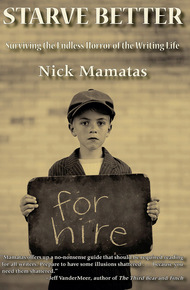 Nick Mamatas is an author, anthologist, editor, and bookseller living in Oakland, California. His early nonfiction about digital culture and politics appeared in magazines such as New Observations, Artbyte, and the Village Voice. Nick's first novel, Move Under Ground crossed the voice of the Beat movement with the themes of H.P. Lovecraft and became an instant cult classic. His other novels include the radical noir Love Is the Law, the satirical science fiction title Under My Roof, and the PM Press novel Sensation, which both prefigured and predicted the rise and fall of the Occupy movement. Nick's fiction and editorial work has won the Bram Stoker Award and has been nominated for four other Stokers, two World Fantasy awards, two Hugo awards, two Locus Awards, and a Shirley Jackson award.

Starve Better offers practical advice for making a living as a writer. In Apex Publications' survival guide, Nick Mamatas touches on both craft and business.

Starve Better makes no promises of making you a best-selling author. It won't feed aspiring writers' dreams of fame and fortune. This book is about survival; how to generate ideas when you needed them yesterday, dialogue and plot on the quick, and what your manuscript is up against in the slush piles of the world. For non-fiction writers, Starve Better offers writing techniques such as how to get (relatively) high-paying assignments in second and third-tier magazines, how to react to your first commissioned assignment, and how to find gigs that pay NOW as the final notices pile up and the mice eat the last of the pasta in the cupboard.

Humor, essays, and some of the most widely read blog pieces from Nick Mamatas, author and editor of fiction that has caught the attention of speculative fiction's most prestigious awards, come together for the first time in a writer's guide that won't teach anyone how to get rich and famous… But will impart the most valuable skill in the business; how to starve better.

"Advice about writing reminds me of nothing so much as the underrated feud between The Undertaker and the late Yokozuna in the early 90s WWF. The Undertaker was and is a stiff and Yokozuna was a butterball better suited for a sideshow than athletic exhibitions, but there was an element of unpredictability that gave their matches something special. I remember watching their infamous Casket Match at 1994's Royal Rumble with my then-roommate who took great joy in reminding me that wrestling was 'fake.' Yes, yes it is. Also fake: situation comedies, Farscape, soap operas, and half the news. This is known. Doesn't make the television less entertaining.

But my roommate just loved pointing out how fake it all was. During the match, the goal of which is to shove one's opponent into a coffin and shut him in, Pablo pointed out that the match was no-disqualification—the only rule was that the match ended when the casket was closed. 'If it's no rules,' demanded Pablo, 'why don't ten bad guys show up, beat the shit out of the Undertaker, and shove him into the casket?'

About a minute later, that's exactly what happened. He shut up after that.

Those ten guys remind me of writing. There are no rules. Only the results matter; the process of shoving the kindhearted zombie mortician into the rented coffin is irrelevant. The problem is that when people can't get the results they want, they become obsessed with process. Nobody holds forth on the writing advice like barely published neophyte writers, and it makes me want to get together a posse of masked men and beat them down.

Recently, I got to witness somebody flip out over adverbs. The Harry Potter books, you see, are full of 'em. If you're flying, it's swiftly, if you're tip-toeing, it's stealthily. This, according to Mister Flippy, was wrong. 'When editors see -ly words from newbies, the submission goes right in the round file! Why can Rowling get away with it?' he wanted to know. He had a readymade answer, too—money-grubbing publishers foolishly allowed adverbs into Harry Potter titles because the books sell. Big Name Authors can break the rules.