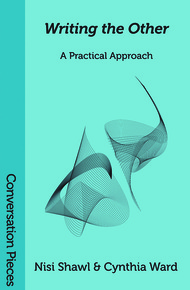 Nisi Shawl wrote the 2016 Nebula finalist and James Tiptree, Jr. Honor novel Everfair, an alternate history in which the Congo overthrows King Leopold II's genocidal regime. In 2005, with Cynthia Ward, they co-wrote Writing the Other: A Practical Approach, now the standard text on diverse character representation in the imaginative genres and the basis of their online and in-person classes of the same name. They're a founder of the inclusivity-focused Carl Brandon Society and have served on the Clarion West Writers Workshop's board of directors for over twenty years.

Shawl's dozens of acclaimed stories have appeared in Analog and Asimov's, among other publications. Many are collected in their 2009 Tiptree Award winner Filter House (2008, Aqueduct), and in two more recent volumes: Exploring Dark Fiction #3: A Primer to Nisi Shawl (2018, Dark Moon) and Talk Like a Man (2019, PM Press). Their short story "Black Betty" was selected by LeVar Burton for inclusion in his live podcast series LeVar Burton Reads.

Shawl edited New Suns: Original Speculative Fiction by People of Color (2019, Solaris) and has edited and co-edited several other anthologies, such as Stories for Chip: A Tribute to Samuel R. Delany; and Strange Matings: Science Fiction, Feminism, African American Voices, and Octavia E. Butler; both finalists for the Locus Award. They contribute reviews and columns to The Seattle Times, Ms. Magazine, The Washington Post, Tor.com, and The Seattle Review of Books. They have lectured at Duke University, Spelman College, the University of Hawaii Manoa, and several other educational institutions. They live in Seattle, near an enticingly large lake filled with dangerous currents.

Cynthia Ward has published stories in Analog, Asimov's, Nightmare, Weird Tales, and other magazines and anthologies. She edited Lost Trails: Forgotten Tales of the Weird West 1-2, and, with Charles G. Waugh co-edited Weird Trails and Native American Tales and Legends. Her short novel The Adventure of the Naked Guide: Blood-Thirsty Agent Book 3 (Aqueduct) will be released March 2020. The Adventure of the Incognita Countess (Book 1, Aqueduct) was a finalist for the Gaylactic Spectrum Award.

Writing the Other by Nisi Shawl and Cynthia Ward

During the 1992 Clarion West Writers Workshop attended by Nisi Shawl and Cynthia Ward, one of the students expressed the opinion that it is a mistake to write about people of ethnic backgrounds different from your own because you might get it wrong—horribly, offensively wrong—and so it is better not even to try. This opinion, commonplace among published as well as aspiring writers, struck Nisi as taking the easy way out and spurred her to write an essay addressing the problem of how to write about characters marked by racial and ethnic differences. In the course of writing the essay, however, she realized that similar problems arise when writers try to create characters whose gender, sexual orientation, and age differ significantly from their own. Nisi and Cynthia collaborated to develop a workshop that addresses these problems with the aim of both increasing writers' skill and sensitivity in portraying difference in their fiction as well as allaying their anxieties about "getting it wrong."

Writing the Other: A Practical Approach is the manual that grew out of their workshop. It discusses basic aspects of characterization and offers elementary techniques, practical exercises, and examples for helping writers create richer and more accurate characters with "differences."

When writing the other, you will depart from the dominant paradigm. For now, let's just loosely define the "dominant paradigm" as what the majority of people in our society would call normal. (We'll explore this construct further later, when we discuss a literary concept called "the unmarked state.") Of course, no one is truly normal. Acknowledging the ways in which we deviate from so-called normalcy is an important step in learning to write the other.

An incident that took place while Nisi and Cynthia were students at the Clarion West Writers Workshop in 1992 gave rise to the original impetus for this guide, the class of the same name, and the original essays that also appear within these covers. One of our classmates opined that it was a mistake to write about people of different ethnicities: you might get it wrong. Horribly, offensively wrong. Better not to even try.

This seemed to Nisi to be taking the easy way out.

Nisi's essay "Beautiful Strangers: Transracial Writing for the Sincere," which originally appeared in the writing how-to magazine Speculations, addressed writing about characters with racial and ethnic differences. But as Nisi soon realized, similar problems arise when we face the difficulty of creating characters whose gender, sexual orientation, age, and so on, differ significantly from our own. So our Writing the Other class extended and expanded on the techniques the essay outlined.

Writing the Other graduates have consistently improved the plausibility of their divergent characters. They've tried, and they've succeeded.

You, too, can learn how to think and write about characters who aren't like you.

We wrote this guide to help.

We will show you what works (and what doesn't) when writing about characters of races, genders, sexual orientations, abilities, religions, nationalities, and other traits and features different from your own. We'll demonstrate the common mistakes and pitfalls of writing about differences and show you how to avoid them.

Of course, as we said earlier, everyone differs in one way or another from the dominant paradigm. However, our culture emphasizes certain kinds of differences. It tells us that these differences are the most important ones, the ones that truly divide us.

You may notice that one profound difference has been left out of this acronym: class. This was a deliberate omission. As we've said, the focus here is on those differences that are generally presumed to be important. While class is arguably as important as race in terms of categorization, and is certainly more scientifically quantifiable, on this continent it's not a difference majority culture recognizes as significant.

The text in this guide's first section is accompanied by writing exercises. You can practice these exercises as frequently or infrequently as you wish, but we advise you to do all the exercises at least once. Because they were designed as part of the Writing the Other class, some of the exercises work best when done with a partner or in a group. However, you are not ­expected to show anyone the results of your exercises or to ­incorporate the direct results of doing these exercises into your work.

These exercises are not tests, and you cannot fail them.

We've also included suggested times for completing each exercise. Though you're not on a tight schedule such as that students attending live Writing the Other classes must contend with, we encourage you to try writing to the ticking of a timer. Try it at least once — taking a moment before you start to clear your mind of distractions, of course. We've found for ourselves that the pressure of producing under these circumstances can force you to switch off your internal editor and just get going!